Jewish. Netherlands. The Anne Frank House was at the top of my list of places to visit in Amsterdam last year. Alas, the queues were so long, we had to give up. The annex where she and her Jewish family stayed while hiding from the Nazi’s campaign to exterminate Jewish people, was small. It could only hold a few tourists at a time. 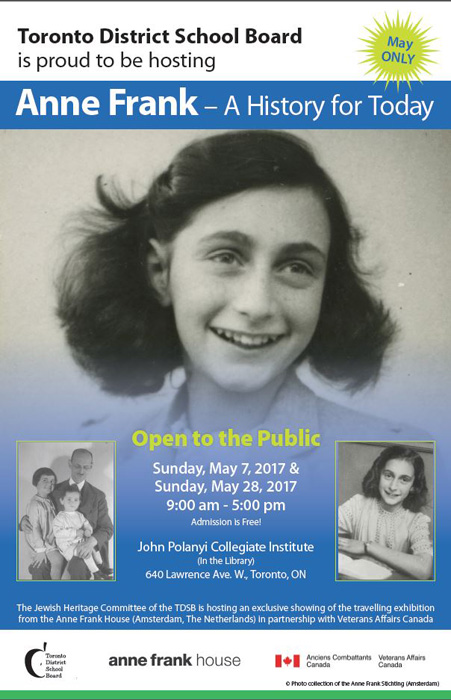 This month, elements of the Anne Frank House have come to Toronto. On two Sundays, May 7 and May 28 the general public can see them. The rest of the time, the exhibit is open to groups of Toronto school children.9am-5pm. Free.

“There’s a picture of her parents’ wedding party, from 1925, and a young Anne sitting in her classroom at school 10 years later,” wrote the Toronto Star on May 4.

“Also on display is a replica of her famous diary, as well as actual examples of Nazi propaganda, a 3-D replica of the secret annex where she and her family hid, and pieces from the Anne Frank House in Amsterdam are also on loan.”  The exhibition is at John Polanyi Collegiate, 640 Lawrence Ave W, North York, 416-395-3303.