What’s special about June 16? At Kew Gardens in Toronto’s Beach, in Montreal, Ottawa and of course in Ireland, and several other countries around the world, it’s “Bloomsday.” I only learned about this annual event last year even though it’s been going on in Toronto for over thirty years.   Anyone can join it, and parts of it are free of  charge. 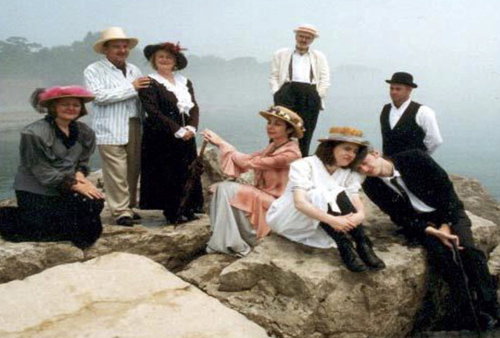 Image by Declan O’Doherty from the Toronto Bloomsday website.

Because I discovered Bloomsday too late last year, I couldn’t personally experience the local commemoration of Irish author James Joyce’s famous novel Ulysses. I have since learned that the book was first published in 1904 and is set in Dublin, Ireland and is considered by some authorities to be the “greatest 20th Century English novel”.

Its main protagonist is Leopold Bloom.  It follows a day in his relatively uneventful life. Yet people even in Toronto dress up in Edwardian clothes as Joyce and the other characters from the book and might even try to eat the same meal Bloom did. Bloomsday participants now read passages from the book too. It must be important, I thought, though most of my friends who read the book, admitted they never finished it either. I managed to read 20 pages and had to give up too. Who has time to read over 700 pages? Besides the plot moves slowly, and holding it to read – well it’s a very heavy book. 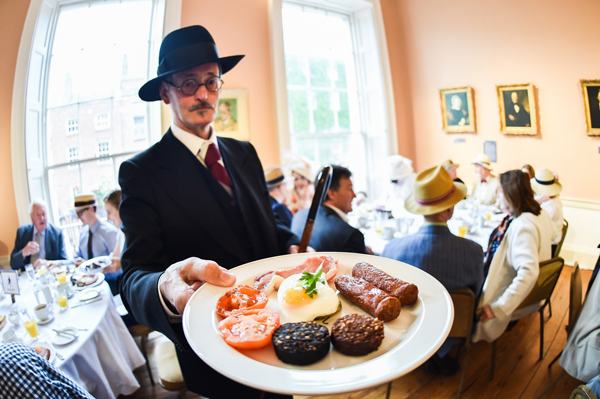 I got a copy of the excellent Irish feature film Bloom based on the book, thinking I could at least learn something about the plot in a couple hours, but I fell asleep watching. Alas, this year, I will be out of town on June 16 so I’ll miss Bloomsday again.

By chance I had an opportunity to go to Dublin this past April.  Of course James Joyce was high on my “To Do” list there. How was Bloomsday  celebrated in the motherland?  As I studied maps and tourist brochures,  I was very impressed with the amount of attention that Ireland gives to its writers. Once there,  I found traces of James Joyce in many prominent places – a life-size statue on one of its main streets. A bridge and a street both sport his name. The local wax museum has a likeness of at least two of the main characters from the book. The James Joyce Tower and Museum is a martello tower, the setting of the first chapter in Ulysses. 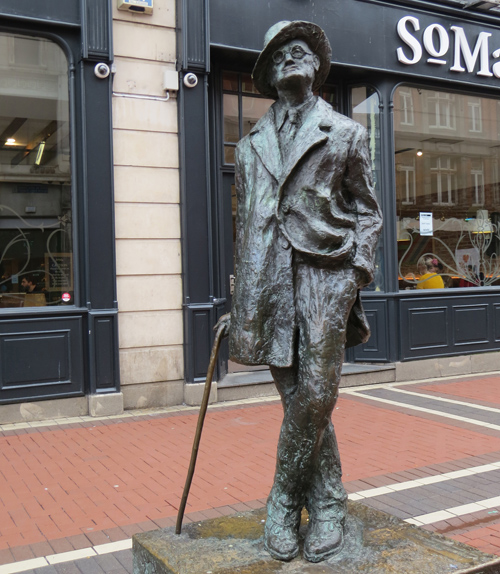 The government-supported James Joyce Cultural Centre has relics of the author, and lots of pictures. It sells “straw boaters”, the hats typically worn by some of the men on Bloomsday.  There I found an affable gent named James Quin who answered a lot of my questions.

On Bloomsday in Dublin, the James Joyce Cultural Centre, pubs, the National Library, and other Irish groups organize celebratory events. 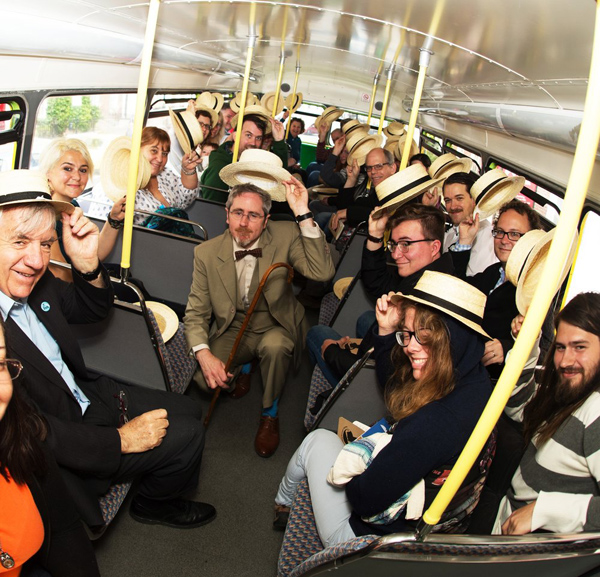 Quin’s centre offers Bloomsday tours, some of which are so popular they are sold out months in advance. He estimates 300 to 400 people took part last year on Bloomsday alone — ordinary people, not actors. There’s also a bus tour that takes about 80 people to all the sites mentioned. Anyone can join tours during the year too. 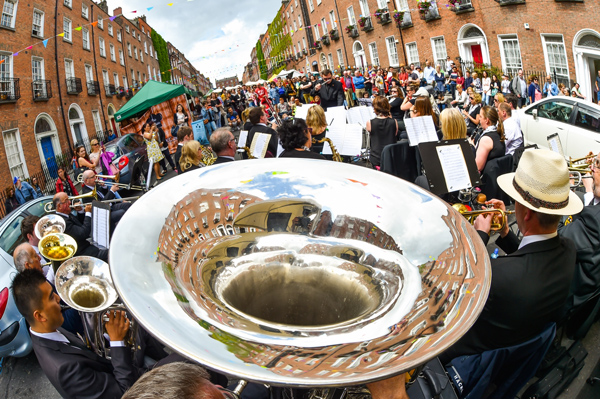 What is the attraction of Ulysses that people want to celebrate its fictitious day over a hundred years after a novel about it was published?  It seems it was indeed a milestone in the history of English literature. It was the beginning of the stream of consciousness style, and one of the first  that dared to describe human sexuality in detail. It tried to link its plot to Homer‘s epic poem The Odyssey. How many of us have read that scholarly classic.  Some say it’s the music of the words, the poetry in Ulysses.

I wondered if Bloomsday is an expression of Irish nationalism, and an opportunity to bring the literati of Ireland together once a year.  Maybe “Ireland’s Shakespeare” is just an excuse for a party.

As I wandered around Dublin, I wondered why so many Irish writers have been immortalized in statues. Joyce is not the only one with a statue.  There’s a prominent one of Oscar Wilde and of Oliver Goldsmith, and WB Yeats. Jonathon Swift gets a lot of ink in St. Patrick’s Cathedral, not just because he was dean there, but for his writings – among them Gulliver’s Travels. 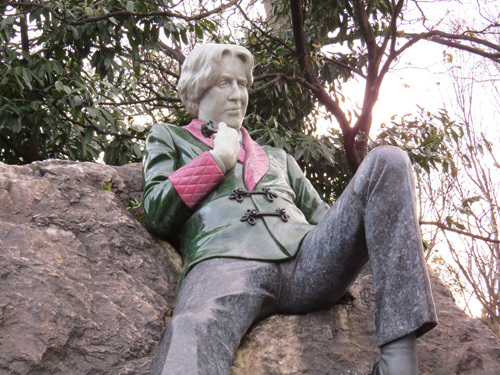 Joyce was not one of the four Irish Nobel literature laureates. Yet he seems to be the only one still with fan clubs meeting yearly around the world. Of course we have the Shaw Festival but it’s not quite the same. Ordinary people, including actors, become the characters from Bloomsday. Of course, only Dublin can have genuine tours of Joycean sites.

My search for Ulysses in Dublin made me wonder why Toronto has mainly statues of poets: Al Purdy, Scotland’s Robbie Burns and Ukraine’s Lesya Ukrainka among them. Maybe some day we will have a statue of André Alexis in High Park where his Fifteen Dogs wandered about with human minds. Will we have people reading aloud the words of each dog some day? Will we have Tor Lit tours that include a plaque on the Bloor Street Viaduct because Michael Ondaatje featured it in his Skin of the Lion? Or a plaque in Vincent Lam’s hospital about the non-medical comings and going-ons there?  Dublin also has an Irish Writers’ Museum.

And why should those of us who are not of Irish origin bother to find out about Joyce’s Ulysses and go to Bloomsday on June 16 in Kew Beach?  After I returned to Toronto, curiosity led me again to the film Bloom. I managed to stay awake this time by watching it earlier in the day. It’s really an excellent film. I found in it the thoughts of ordinary people as they went about their ordinary day – thoughts that could be of people everywhere who might wonder helplessly about an unfaithful spouse. There was something universal about the fascinating characters.

After I finished the film, I felt that I had learned almost enough about Ulysses and James Joyce to be able to check it off my list of books to read — well at least to find out about. But during all this research I came across a TED talk by an English-speaking woman who tried to read books about cultures other than those of Britain and North America, books recommended by people from all over the world who had heard about her on the Web.  It was titled 49 Incredible Books from 49 Different Countries and surprisingly included James’ Ulysses.  I liked her idea  so much, I saved her list hoping that some day I’ll be able to start reading from it. These books could be a windows into the background of people from many of Toronto’s heritage countries like Mongolia, Ethiopia, and Armenia.

And then I thought. Hey, wait a minute. I already have two dozen books by my bed waiting to be read. Besides, my blog, this blog is about festivals, not books. At the rate I became acquainted with Joyce’s Ulysses, it would take me 49 years to read the 49 books.  Besides, if I spent time reading so many books, I wouldn’t  have time to meet real people who might  teach me how to tie a turban or tell me why they are opposed to Ontario’s sex education curriculum. Toronto’s festivals provide opportunities to interact with real people, stimulating our minds, and probably prolonging our lives (or so says another TED talk).  So I decided to wait until I could no longer go to festivals to start reading those 49 “incredible” books.

I’ll try to catch Toronto’s Bloomsday next year. It will bring closure to my Ulysses period so I can truly move on to other festivals and books. I’ll ask the people dressed in Edwardian costumes if they are of Irish origin, and why they chose to celebrate a book about an imaginary incident.  Why read Molly Bloom’s soliloquies aloud, and how does its plot follow that of the ancient Greek poem. Had they read the whole book? Are they all actors from Toronto Irish Players?

I hope you go this year. If so, here’s the information again for the 2018 edition of Bloomsday.  Enjoy it. 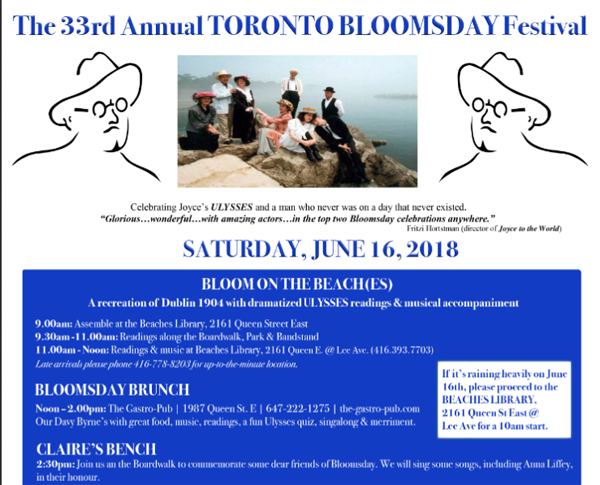 The schedule in Toronto: 9am — Assemble at Beaches Library, 2161 Queen Street East  (416-393-7703);  9:30-11am — Readings along the Boardwalk, Park and Bandstand; 11am-noon —  Readings and music at the Beaches Library. Noon-2pm — Gastro Pub, 1987 Queen Street East;  2:30pm — Claire’s Bench. More information will be on: www/toronto.bloomsday.com. Or you can phone 416-778-8203 or email: richardharte@rogers.com. If you go or don’t go, I think it would be fun also to check out what’s happening in Dublin in comparison, although it’s too late now to book some of the events if you are lucky enough to be there at the time. The following lists all the James Joyce events there June 11-16:  http://www.bloomsdayfestival.ie.

As for the TED talk on the secret to living longer, see:  https://www.ted.com/talks/susan_pinker_the_secret_to_living_longer_may_be_your_social_life/transcript?language=en

Note: I am grateful to Fáilte Ireland who provided my DoDublin Travel Card and entry fees to museums in Dublin. Thanks to it also for hosting the SATW travel writers’ convention in Ireland.