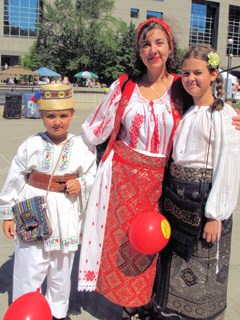 Do you feel uneasy going to a place where you know no one? Where you wonder if anyone speaks English?

The seventh annual Romanian festival was at Mel Lastman Square. It was sponsored by several Romanian Orthodox churches. Books and icons were on sale. Among words on the titles was “catehism” and “Iisus Hristsos.” It really doesn’t take much to understand what they are about.

The costumes on some of the dancers were embellished with bright red or black embroidery. Did colours mean anything? The symbols? The dancers spoke English. No problem. They told me without being asked, what time they would be dancing. They made me feel even more welcome.

Several stalls served food. The air was filled with the aroma of barbecued sausages. I was temped to try a pastry filled with spinach. They were covered with sesame seeds and looked crispy. They were different from my favourite Greek spanakopita. 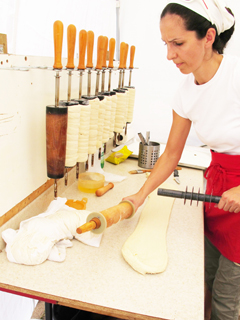 I was fascinated by a woman with a set of cylinders that looked like wooden rolling pins. She wrapped a wad of dough around each cylinder and scored it with a four-bladed knife. She rotated them in an oven until they were brown. Then she rolled them in walnuts or sugar. People were lined up to buy them. I couldn’t resist. Mine was sweet, the outside crispy, the inside soft. I couldn’t stop eating it.

“What do you call these in Romanian?” I asked. “They are not Romanian,” answered the cook. “They are Hungarian, from Transylvania.” A sign outside called them “kurtos kalacs.” She called them Mr. Twist in English. ”Hungary is close to Romania,” she explained. I wondered about vampires and why there were Hungarians at a Romanian festival. She was too busy cooking to talk. No one else at that stall spoke English.

But I could have asked any number of people who were sitting around eating.

I happened to pick up a copy of the Romanian newspaper Acasa from one of the stalls.

“Do you read Romanian?” asked a young man standing nearby. He spoke excellent English. 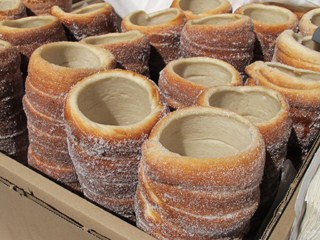 That was the beginning of a long, pleasant conversation. He and his wife had been in Canada, in Kitchener-Waterloo, for eight years. They were not labourers, he said. She was a pharmacist and he had had a white-collar job in the international insurance business in Romania.

“We decided to invest in education when we came here,” he said. His wife took courses to qualify as a pharmacist. After she graduated and got a job, he worked on a couple of business degrees.

He blamed the Communist period in Romania for not allowing people to think for themselves. Romanians were used to being told what to do. When the Communists were overthrown in 1989, they didn’t know how to make a living on their own. Many came to Canada. They expected the government to help them out forever. Many went back to Romania to “nothing.”

He and his wife are happy here. They both have good jobs, two cars and a house. It’s always uplifting to hear a success story.

I looked up “kurtos kalacs” on the Web after I got home. Toronto’s ethnic festivals frequently send me to the Web to learn more about each country. These pastries, known as “chimney cakes”, are unique to the Transylvania region of Romania. They are sold on the street and at carnivals. Many Hungarians live in that section of Romania. I learned that Romania was multicultural too.

The cook had obviously brought the cylinders from Romania. She was not one to expect the government to take care of her forever. Her business card said she catered parties. Tim Hortons needn’t worry yet, but it might think about adding a new product.