The Japan Foundation is always full of wonderful surprise lectures. Wednesday’s by Prof. Reiji Iwabuchi had exquisite pictures of hybrid Japanese flowers. He taught us about the love of Mutant Morning Glories during the Edo era, one of the most prosperous periods in Japanese history. He told us where we might be able to buy seeds today.

Although the Edo shoguns reigned from 1603 – 1868, the period lost much of its hierarchical rigidity as it progressed. At the turn of the 1800s, people were learning to express themselves through various new activities they could enjoy close to home. 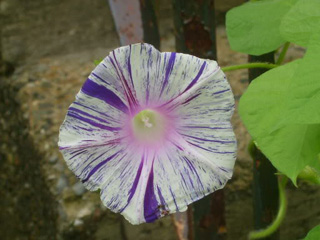 Having a garden filled with new varieties of plants or an indoor Bonsai became fashionable and very special indeed.

Prof. Iwabuchi is from the National Museum of Japanese History. He awakened us to the variety, intricate craftsmanship, and stunning beauty of the then little known art of Bonsai or Mutant Morning Glories. Originally morning glories were imported from China for medicinal purposes as a laxative. However, their beauty captured the attention of both the higher and lower classes. They became a favourite flower to mutate and were given special names. The seven-shaped leaves became the Seven Gods of Fortune, for example.

Buddhist monks explored the craft of mutation. They developed one type of simple mutation for the poor and very intricate kinds for the upper class. The cheaper variety had simple colours with a shrunken size and long or short petals. The rich savoured the full range of complex vines, twisted into one large trunk, or claw-like leaves, and feathery or star-burst tiny petals. 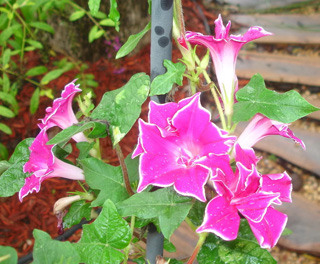 The monks had a special name for the more complicated mutations, which translated into English means "that which makes yen." They could charge exorbitant prices for them.

Today there are specialized folk who experiment with this continued craft. For those who are interested, a shop at the National Museum of Japanese History in Sakura, Japan sells some mutant Morning Glory seeds for those who want to try them out themselves. However it is doubful that they export them. This means that you would have to go to Japan to acquire them.

How tempting that sounds.