215. Ethiopian Orthodox Christmas Feast of the Nativity, a Report 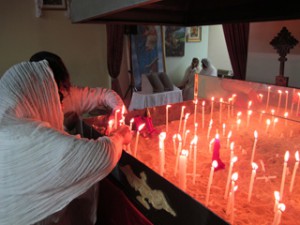 I knew we would be welcomed even before we arrived. I had telephoned the church a couple days earlier about the evening’s program. It was announced as six-hours long. It was daunting.

Program Manager Alemayehu answered the phone. Yes, we could come and go any time. The most important was 8:30 to 10pm. Yes, I could take pictures. He sounded friendly.

St. Mary Ethiopian Orthodox Tewahedo Church was in an industrial neighbourhood near Dufferin and Castlefield. We arrived about 8:15. It was dark but we knew we had found the place because I had seen it on Google Maps.  It was the only building on the street surrounded by cars. We followed some women in long skirts and white shawls into the low-slung structure. Behind it rose a huge, impressive, flood-lit domed church that will be opened next July. 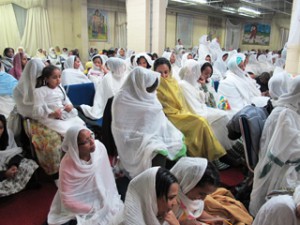 I think the people inside were a little surprised to see our Chinese and Caucasian faces. One of them asked what we wanted, as if we were lost. I mentioned Alemayehu and said we wanted to experience their church service. The atmosphere became even friendlier. We were pointed to a table where two smiling women were supervising a basket full of five and ten dollar bills. They said Alemayehu would be back soon and didn’t seem to mind that I didn’t make a contribution.

The women handed us plastic bags for our shoes, a card with “Merry Christmas” in English, and a flexible candle made of rope. So some Orthodox Christians did say “Merry Christmas,” I thought. We were urged to take the bags with us, so we wouldn’t lose our shoes. Many of the other people just left theirs in a pile by the door. 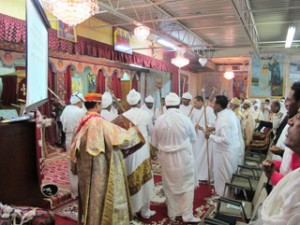 One of the ushers beckoned us to follow him past a bank of lighted candles. The room was mainly full of women. Most of them had their heads and bodies covered with white gauze cotton shawls. I was glad I had brought a scarf for my own head. There must have been 400 people there, crowded tightly together. Children played. The young man led us past the women’s section to the only available seats.

“It is our custom to separate the men from the women,” he said. “But today is a holiday.” He smiled. 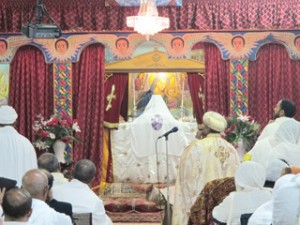 We sat behind the men and I tried to take some pictures. Almost all the men were bare-headed and in western dress. I could see a dozen or so men, most wearing white turbans, in the front of the room. A man with a computer was putting what I assumed to be Amharic words on a screen.

The usher was standing behind us and he told me to go up to the front to take pictures. The monks and priests were performing their ritual there. I made my way slowly toward the altar, hoping I wouldn’t be distracting the worshippers. Most ignored me. The officials were chanting and slowly dancing to the beat of drums. Two of them wore gold turbans. One of the drummers was young, in his late thirties, with a red turban. The three were in gold robes. From time to time, the women trilled, their voices beautiful like a flock of birds.

A cloth covered the altar, ready for mass at 10pm, the usher said later. The walls were covered with painted cherubs, pictures of the holy family, and lions and leopards. At 10 also, everybody would light their candles, the usher said. But alas, we couldn’t wait an hour.

Next year, the service will in the new cathedral building. I hope other Torontonians will join us too. It was an exotic, beautiful experience I am sure others would enjoy seeing too. We’ll plan on staying later.