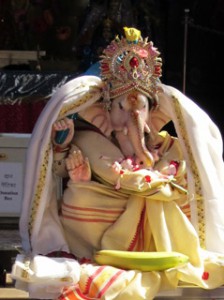 On Wednesday March 7 or Thursday, March 8, Toronto Hindus will be celebrating the festival of Holi, Gaura Purnima. It is a religious festival. It commemorates the appearance in India of an incarnation of Lord Krishna in 1486. Festivals are ideal times to visit many Hindu temples as you can watch a lot of rituals performed. Worshippers will be dressed in gorgeous Indian clothes.

At the Hare Krishna Temple, festivities start at 6pm on Thursday and continue to 9:30pm. It will include chanting, feasting, and dancing. Go, if only for the great vegetarian food served at the end. It’s free.

The Vishnu Mandir is celebrating on Wednesday, March 7 from 6:30pm. It will also have a Holi market from noon to about 5pm on Sunday, March 11, with clothing, jewellery and food for sale. It will be raffling a car that day too.

In India we had to be careful what we wore. Even strangers would come along and throw coloured water and powder on us. In Toronto, I haven’t found any place where this happens. The Hare Krishna Temple says it’s too hard to clean up so they ask people not to bring colours.

For reports on our visits to the Vishnu Mandir which is at 8640 Yonge St., see: http://bit.ly/yACkBP and http://bit.ly/A6TMjX. On my last visit this week, the owner told me its museum was being renovated and would be open in four weeks. I was allowed to take one picture.