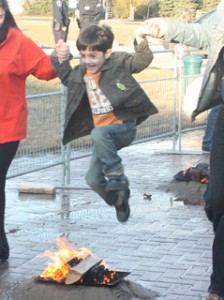 It was my first Fire Festival. I was expecting to see mainly men jump over a big bonfire like acrobats. Instead, I found three small fires, about a couple meters apart at the Chahar Shanbeh Suri, the Iranian festival held last Tuesday evening in Richmond Hill. This event is related to Norwuz, the Iranian New Year.

Iranians were just stepping over the flames, not jumping. Some were carrying babies. Several couples held older children by the hands and swung them up and over, above the heat. A couple of glamorous women in heels stepped nonchalantly over the fire as if they did this every day. A girl who looked about ten seemed to enjoy the experience so much that she lined up again and again to execute grand jetes. Young boys, eager to prove their fearlessness, grinned as they crossed over the flames.

It did look like fun, but I wasn’t brave enough to do it myself.

One of the women said afterwards that they were all doing it for health reasons. Her husband said I couldn’t use her name nor show her picture on the web. I guessed that the political situation in Iran was making people here nervous about going public.

I didn’t hear anyone shouting the Iranian equivalent of “Give me your beautiful colour.” This is what I had read was part of the tradition. The fire is supposed to bring healthy colours to the jumpers. It’s supposed to get rid of disease.

People just seemed to be having a lot of fun. I did see a couple of fire extinguishers nearby and several firemen were standing chatting. It didn’t look like they were worried even though the flames were licking some of the feet.

Inside a nearby building, the noise of a rock band was so deafening that we hurried out of there as soon as possible. This was too bad because some of the exhibits there were interesting. Stalls with decorated garlic bulbs made an attractive sight. They looked like unusual flowers or decorated eggs at first. They were probably symbols of spring. 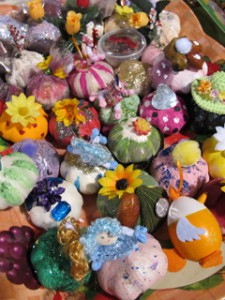 A quick tour of the hall revealed real estate agents, bank representatives, insurance people, and delicious-looking holiday snacks. The chocolate-covered apples, pastries and cookies looked delicious. A vendor said, the stunning gold mask on display was meant to make women beautiful. I wanted to ask questions but the noise was so painful, we had to leave.

Maybe someone will do something about diminishing the blare of that band next year.

Can anyone give us a report of what happened at the festival at Mel Lastman Square that same evening?