241. Proud to be Portuguese-Canadian 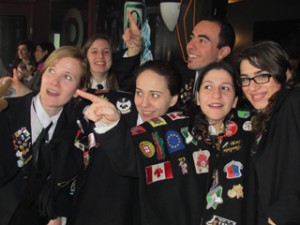 The program started at 9:30am. The schedule from the web said it would continue until 6pm with a concert at 7:30.

I arrived at the MOD Club Theatre on College just before the lunch break, just as the last morning speaker was finishing. No one approached me as I entered. I went into what looked like a night club, thinking I could be taken for a Macao Chinese. The fifty or so people who had been in the audience were so busy talking with each other that I seemed invisible to them. I sat alone studying the scene. 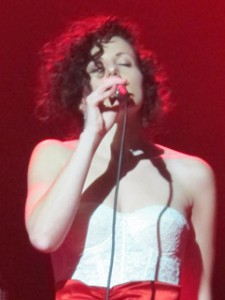 As soon as I saw people carrying lunch to the tables, I joined the food line-up. It turned out the event was a project of the Portuguese government. Lunch was free. The Portuguese-style sandwiches and soup from the nearby Nova Era Bakery were great. Dessert was an assortment of delicious pastries.

A young couple sat down beside me. They were charming and friendly. He was Portuguese; she was of Italian background and said she loved the Portuguese culture. They convinced me that I also was an honourary Portuguese. After all, I knew a few words of the language and had visited the Azores.

They said the speakers were interesting and inspiring. The event was worth coming to.  Speakers included the likes of Carmen Correia, president and founding owner of the Chef Network, and Ana Bailão, City Councillor for Ward 18.

I talked with a group of university students. They were dressed in stark Portuguese choir uniforms but their capes were decorated with colourful patches – Canadian flags, Homer Simpson, Sociology. “The patches represent us,” one of them said. 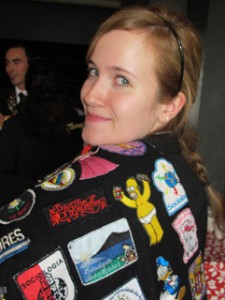 The students belonged to the Luso-Can Tuna. A tuna is a choir that sings folk music accompanied by stringed musical instruments. I had seen a similarly-dressed choir at the Hispanic Festival last year. That one was Chilean.  The students all spoke Portuguese as well as English, they said. One said she fought against having to learn Portuguese, but now she was proud to be Portuguese-Canadian.

After lunch there was a panel consisting of people in the arts and entertainment. Like all the other speakers, they were of Portuguese origin.  They were all successful in their fields and the ones I heard spoke excellent English.

As the entertainers and publicists introduced themselves, most talked about drifting away from their Portuguese roots. One said it was nice to be around “my people.” Another said, he was glad to be “back to find out what my heritage is all about.”

As they spoke, I kept wondering why the Portuguese government was sponsoring this kind of project. Portugal is a country on the brink of bankruptcy. Was it trying to get these professionals to support the motherland? Many were already going to Portugal for visits.

Whatever the case, I was sorry I came late and had to leave early. The concept was great. I wanted to know about more Portuguese professionals. I also kept thinking that other groups would benefit from a Proud to be whatever-Canadian event. For some, it would be a shot of self-confidence, especially for the young.

The students were there to perform. I was sorry there weren’t more young people there to listen. Most of the people looked like they were in the twenties and thirties.

For the detailed program and speakers, click on: http://bit.ly/AChkA3 .