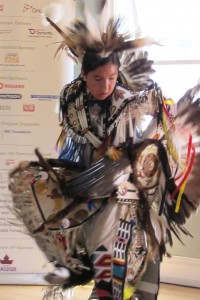 I spent a leisurely afternoon at Fort York last Sunday. It was commemorating the War of 1812. My highlights were the three First Nations performances. The Natives were represented because it was Gen. Isaac Brock and a First Nations confederacy under Tecumseh that won that war. But the performances had nothing to do with the war.

Charming Lisa Odjig spinning her hoops was outstanding. The Manitoulin Island native explained how she started learning this male art form from her uncle. She brought two volunteers on stage and taught them successfully how to twirl the circles. She led a line dance on the grass in front of the stage that left her large audience smiling happily.

Lisa Odjig is a two-time World Champion Hoop Dancer, the first woman to ever win that title. She was a semi-finalist in the 2012 Canada’s Got Talent Contest. That we can see her on a Toronto stage for free, should not be missed. Look for her at other festivals this month too. June is Aboriginal Heritage Month in Toronto.

I had never heard of Morningstar River before, but I won’t forget them from now on. They were a close second to Lisa. Lead singer and organizer Eddy Robinson is a Toronto-born Anishinaabek (Ojibway/Cree). He kept all of us spellbound by his humour and explanations. He and dancer Talon Whiteye were outstanding. The regalia especially was top quality. Look for them too. In the meantime, there’s: http://www.morningstarriver.com.

The Kehewin Native Dance Theatre was good too, but compared to the other two, it ran third. They are great at telling native stories. They kept children and adults interested.