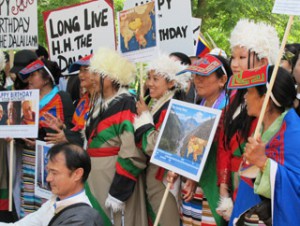 I’m sorry I didn’t get the information to you more quickly. I didn’t know the details of the Dalai Lama’s 77th birthday celebrations until two days before. This was too late to mention them in my weekend blog. I did get it into my Calendar and Twitter. 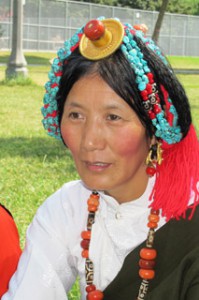 The birthday was an especially colourful event. The sun was shining and it was great for pictures. The Tibetans were as friendly and helpful as usual. They gathered at Trinity-Bellwoods Park, where several sang and drummed. They answered my questions about their costumes. As you know, each region of Tibet has its own sub-culture. Two groups carried signs explaining that they were from Kongpo and Khampa.

The previous Tibetan festivals I’ve been to in Toronto have been in winter. At first I thought the explosion of colour at this one was because it was summer. Nobody had to hide their traditional dress under heavy coats. But, no, it was because “We’re celebrating. We’re not protesting,” explained one participant. “We only wear our best clothes on happy occasions.” At those other times, they were objecting to China’s attempts to destroy their traditional culture. 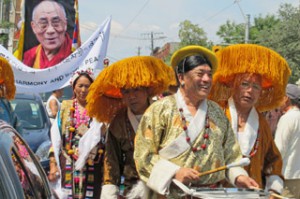 And their clothes were beautiful, especially those of the women. Many wore long silk gowns with traditional striped aprons. (Unmarried women do not wear aprons.) A few wore head-dresses of long hair with slender braids dangling down, or hair woven with jewellery on their heads like a crown. They wore a lot of traditional jewellery made of silver, turquoise, coral and/or amber. A few people wore sheep skin caps.

Even some of the men wore brocade, or tunics trimmed with silk. Even the monks looked festive in maroon robes and orange shirts. 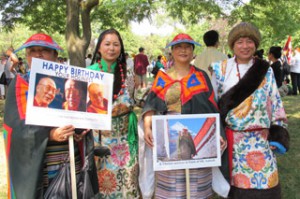 One group in silk drummed and rang bells. Elderly dancers waved wands and sang. The men wore huge orange hats with long fringes that covered their foreheads. I’ve been to Tibet about six times, and to Tibetan communities in India and Nepal. I had never seen this kind of hat before. “They are only used for very special occasions,” explained one of them.

Their costumes were made in Nepal and India, where many of these people used to live.

M.P. (Parkdale-High Park) Peggy Nash gave greetings and led everybody in singing “Happy Birthday” in English. There must have been a couple of hundred people there. Then the parade started toward Yonge Street and thence north to a park. I hope you saw it along the way.