296. CNE International Stage Hosts Performers from around the World 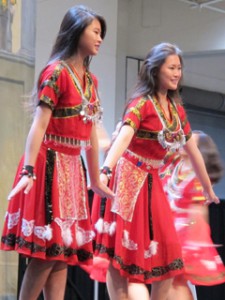 In late summer, the world gathers under one roof at the Canadian National Exhibition (CNE) in Toronto, running this year from August 17 to September 3.

The International Hall, located in the Direct Energy Building on the CNE grounds near Lake Ontario, hosts booths selling everything from carved masks from Kenya and matryoshka dolls from Russia to alpaca ponchos from Peru.

As a complement to – or a respite from – all that shopping, the International Stage at the centre of the hall hosts a busy program of performances reflecting a range of world cultures. Although some performers have travelled from their home countries, the great thing about Toronto is that most of them are now based here. 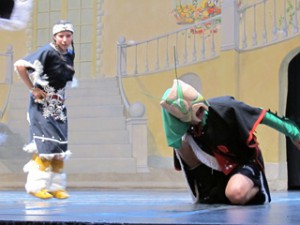 Take the group Tuna Lazos de Amistad, one of three performances sampled earlier this week. Most of the 17 members of this band and singing group are originally from Colombia. They perform lively Spanish songs in black pants, white shirts, green sashes and flowing black capes adorned with long ribbons from various festivals – the East York Carnival, the Diaspora Colombia.

In an interview after their set, the general director, Mario Tobar, explained that their name – lazos de amistad – means “bonds of friendship.” A tuna has nothing to do with a fish. It’s a Hispanic singing group that hearkens back to a medieval university tradition — groups of poor students would roam the town, singing for food or money for their tuition. The “tuna” in the name comes from the French “roi de Thunes,” or “king of Tunis,” slang for a leader of vagabonds. 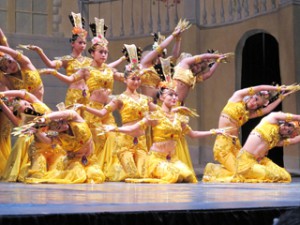 Chinese culture was represented by a taste of the Yate Dance and Acrobatic team, which did a few warm-ups before their scheduled evening performances. However, the Orient Dance Company provided Toronto-based performers who “have a passion for Chinese folk dance,” according to the m.c., who introduced himself as Daniel.

The first group were girls from about six to 13 years old, wearing red and gold satin shirts and pants. They charmingly waved brilliant red streamers and in their flowing movements they looked like a choreographed breeze. 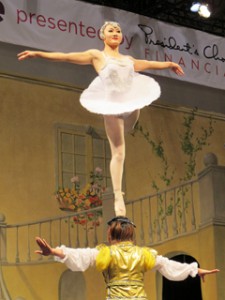 Six adult women in bright yellow performed a dance with pink and white fans and a group of teenage girls briskly went through the paces of a folk dance and a tambourine dance. All three groups – they joined together for the finale – looked as if they were enjoying themselves.

While the Chinese dances had no apparent story and focused solely on movement, the last group viewed today told tales from a fascinating culture, but you couldn’t say it was foreign.

The Dancers of Damelahamid are from the northwest coast of British Columbia and perhaps, given that their homeland is close to Alaska, it does qualify as foreign for most Canadians. Their red and black costumes carried the distinctive artwork seen on Pacific totem poles – stylized birds and fish.

The dances were introduced by group member Margaret Grenier, who said that “we are the peoples of the four clans – fire weed, frog, eagle and wolf.” The dances, chanting and drumming told stories of destructive grasshoppers eaten by birds who restore the balance of nature, and of a “call to the four winds” that conjures up the ancestors’ teachings about the earth.

The final performance, a dance with open gestures and smiles, looked like an expression of friendship and welcoming. Like the entire day’s program, it was a celebration.

Solange De Santis is a New York-based writer who covers the performing arts. Her blog: http://solangeontheater.blogspot.ca.