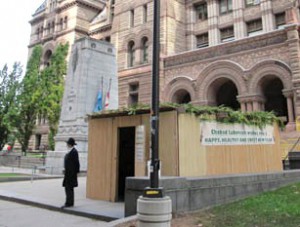 Did you see the sukkah this past week in front of the Old City Hall at Queen and Bay? I dropped in and friendly Rabbi Gansburg of the Chabad Lubavitch movement readily answered my questions. This temporary shelter was built to commemorate the 40 years of wandering in the Sinai desert, the exodus of the Jews from Egypt about 3500 years ago. It’s been at this site for several decades annually during the Sukkot festival. No one will be there this weekend and it will be taken down this coming Wednesday. 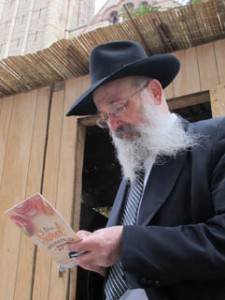 Rabbi Gansburg said the shelter was for the use of Jews working downtown. While I was there, a young woman entered, and the rabbi showed her how to shake the branches of four different trees tied together. Strict observers do this on each day of the festival, which this year is from October 1 through October 7. The branches symbolize the diversity of the Jewish people, he said.

Followers also eat all meals during this holiday in a sukkah and the one downtown is set up with tables for communal lunches. The rabbi gave me a helpful booklet explaining the customs.

Even though I’ve lived in Toronto for several decades, I’ve never before noticed this tiny, wooden building with the leafy roof. It took a trip that week to nearby St. Michael’s Hospital for me to see this lovely example of multicultural Toronto.