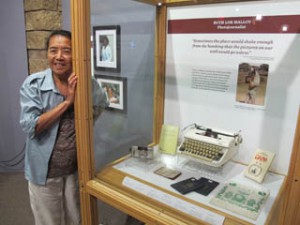 Black Creek Pioneer Village is expanding its definition of “pioneer.” Last evening, it opened a new exhibit: “They gave up themselves for the next generation”: The Working Lives of Chinese Canadian Women, 1923-1967.

While Chinese-Canadian women didn’t usually plant apple trees or raise their own chickens, they did work in laundries and restaurants and made sure their kids got a Canadian education.

My own maternal grandmother started life as an indentured servant in China. She came with her husband to North Bay, Ontario in the early 1900s, and brought up five children on her own after her husband’s death. She never had a chance to learn English and she had to endure the death of one of her sons. He was murdered during a robbery and his killer was never found.

She was as much a pioneer as the village women who lived in Ontario in the mid-1800s. Between 1923 and 1967, some Chinese-Canadian women also flew airplanes, modeled and designed clothes, and wrote for Toronto newspapers. 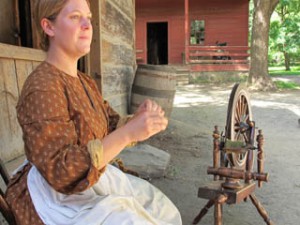 The exhibit also includes yours truly, a section with my old typewriter and camera, a copy of my first guide book on China, a magazine which printed my first stories in the 1950s, and my novel. I later published about 12 editions of the China travel guide. Yes, you can consider me a pioneer museum relic too.

The Village’s admission prices are in the high range for this Blog ($15 for adults and $11 for children 5-15 years). The Village is open every day including holidays from May 1st to Dec 23rd. The Chinese-Canadian exhibit in the Visitors’ Centre will continue until December, 2013.

If you haven’t seen the other buildings and living exhibits in Black Creek Pioneer Village, do spend time there too. It is a charming part of Toronto’s cultural tradition with its 40 or so genuine 19th century buildings. Look for the school, church, print shop, tin smith’s shop, and black smith’s shop. Consider eating in its restaurant. It makes its own beer the old fashioned way.

The Village “looks forward to working with more groups in the future to share our stories and reflect the diversity that characterizes present-day Toronto.” It worked on this exhibit with the Multicultural History Society of Ontario. See: www.mhso.ca/chinesecanadianwomen .

Please let us know what you think of it.