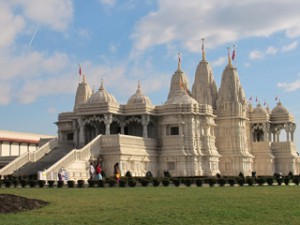 One of my Hindu friends jokes that the beautiful white temple at 427 and Finch is not really Hindu. It’s too organized, he says.

Last week, five of us non-Hindus, appreciated its extremely-well organized arrangements for Diwali visitors. I wish some other religious communities would make visitors feel equally welcome.

A platoon of volunteers directed the stream of cars to park, even on the grass. A congenial volunteer welcomed us at the temple’s door and explained the procedure — like what to do in case of fire. If we took pictures, we would be asked to leave, he said. He made sure a guide met us. 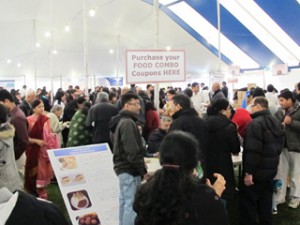 The guide Charu was wonderful. She led us to the tables where we exchanged our shoes for a coloured token. Each pair was put into a plastic bags and labelled.

Charu then herded us into a large room with about eight exhibits. Each had a chart in English explaining one aspect of Hinduism – one supreme god with many manifestations, for example. Another explained about Karma, and a third about Ahimsa, or non-violence. Bright young women also explained these essentials of the religion, and answered questions. They all wore similar saris. Charu led us from one exhibit to the other. 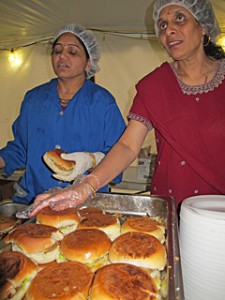 One presenter explained that this temple was part of a sect of Hinduism. It has about 70 branches in India, and branches in cities elsewhere like London, Chicago, Houston and Atlanta.

Charu led us to a room where we saw a mountain of food, piled ever so neatly and intricately, the rectangular sweets carefully stacked in tiny pyramids. These gifts for the gods and the temple were from worshippers. Charu said volunteers had worked until four in the morning to display the offerings. After Diwali, the food would be distributed to charities, and to the 500 volunteers helping with the festival.

Upstairs in a white chapel were the statues of the gods, each shrine decorated with tiny lamps. Charu explained about the fine limestone carvings on the ceiling, the domes, and the pillars. They were stunningly beautiful, each a work of art by carvers in India. The floor was marble. This room was the most crowded even though women volunteers held up large signs urging us silently to move on. I remembered signs from last year also asking visitors to be silent.

In yet another chapel, Charu told us to pour water on a statue of the sect’s founder. Our wish would come true if we did, she said. 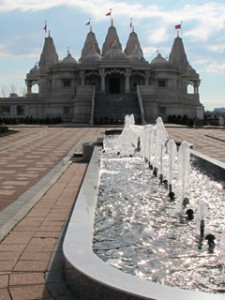 Back downstairs, we passed large tables where we could leave donations and where we could buy sandalwood soap, religious amulets, and books. No one pressured us for donations.

When it came time to leave, we headed back for our shoes. I discovered then that my green token meant my shoes were at the green, not the yellow table. Then in the large tent outside, volunteers sold us coupons with which we could buy vegetarian burgers, gotas, and samosas. Yes, the signs were all in English. At another booth were “Diwali Specials,” boxes of what looked like crispy potato chips. As we left the tent, other volunteers handed out small containers of “Prasadam (‘sancified food’) May contain soy, wheat, nuts or milk.” They pressed a red circle on our foreheads.

I have been to many Hindu temples during my four years in India, the last time in the 1990s. This kind of organization was new to me. I can understand why Ontario high school students can get credit for visiting this temple. It was a great educational experience.