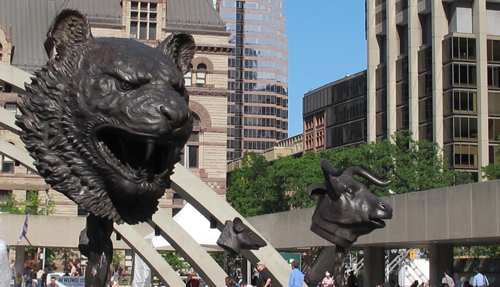 Lucky us. We’re one of eight North American cities to host this important work by world-class artist, Beijing-based Ai Wei Wei. We’re the only one in Canada. Best of all, we can appreciate this exhibition any time of the day or night until September 22 and it’s free.

Circle of Animals/Zodiac Heads: Bronze is well worth a trip to Nathan Phillips Square. The animal heads are powerful and beautiful. They are made of metal. Each weighs from 680 kgs. to 953 kgs. (1,500 to 2,100 pounds) not including their marble bases. With the base, each is three meters high. You can well imagine the amount of work and technology needed for these creations. 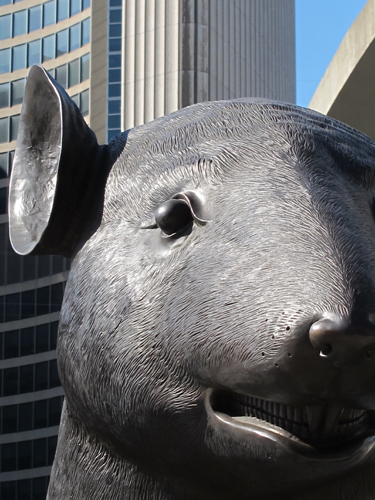 As you circle the pool – they are in order Rat, Ox, Tiger, Rabbit, Dragon, Snake, Horse, Goat, Monkey, Rooster, Dog and Pig. These zodiac animals have been found on ancient pottery as early as the Tang Dynasty (618-907 C.E.) in China, and their origin is probably older. This 12-year animal cycle is an important part of Chinese culture, even today. Many Chinese and other Toronto people too still consult this horoscope during the Chinese New Year.

Ai’s work is a re-interpretation of some of the twelve bronze animal heads designed by two European Jesuits in the 18th century for Qing dynasty Emperor Qianlong. These were in his summer palace, not far from the current Summer Palace visited by tourists today. Western troops looted Qianlong’s Yuanming Yuan in 1860 and only five of the original pieces have now been returned to China. 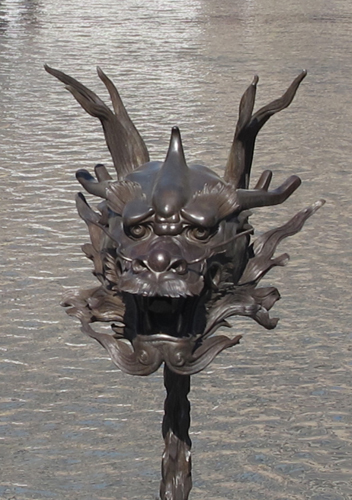 A press release from the Art Gallery of Ontario says, “In re-interpreting these objects on an oversized scale, Ai Weiwei focuses attention on questions of looting and repatriation, while extending his ongoing exploration of the ‘fake’ and the copy in relation to the original.”

Ai Wei Wei is an outspoken activist as well as artist. As such, he has frequently been in trouble with the Chinese government who has seized his passport and kept him under surveillance. He did show up on Skype from Beijing in a special performance with Laurie Anderson at this year’s Luminato Festival in Toronto. 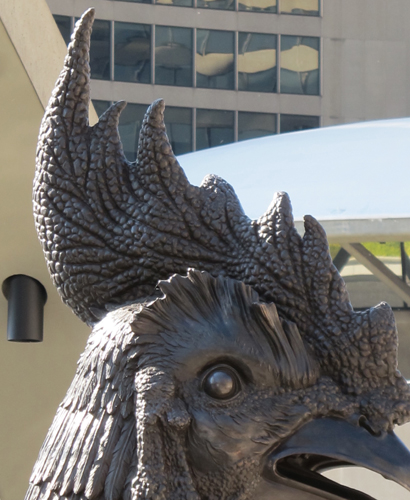 He is the subject of a 2012 video available free from the Toronto Public Library: Ai Weiwei: Never Sorry.

The exhibition precedes the AGO’s Ai Weiwei: According to What?, opening on Aug. 17, 2013 with photography, installations, video and audio work. Look for the photograph of him smashing a valuable ancient vase. 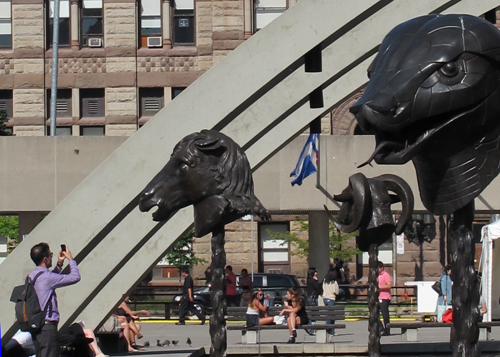 On Aug.18, from 1-5pm, the AGO is organizing theSay Their Names, Remember, a live reading of the names of the thousands of school children who perished in the earthquake in China’s Sichuan province on May 12, 2008. Ai Wei Wei has been collecting these names and criticizing the shoddy construction of Sichuan schools which resulted in the deaths. If you speak Chinese and wish to volunteer, see: www.ago.net/aiweiwei-names.

Scotiabank ‘s Nuit Blanche will also present the installation of a new edition of Ai’s Forever Bicycles (2013)—a sculpture of more than 1,000 bicycles—as part of this year’s celebration on Oct. 5. It will also be in Nathan Phillips Square.