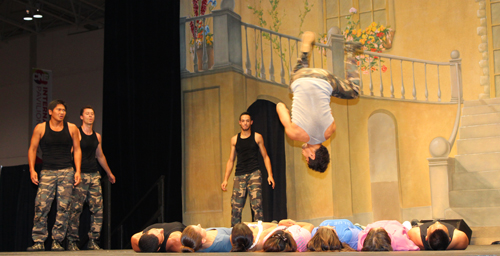 There were no fireworks, but a few men were flying through the air at the opening of the Ex’s International Stage on August 16. Most of the men will continue to fly and amuse audiences twice daily during the Canadian National Exhibition’s two week-long event. The Ex is a Toronto tradition.

The men were members of the Cascade Demo Team, a stunt and acrobatic company based in France. They were dressed in camouflage trousers and black tees. Their skit centered around a conflict between a group of soldiers and their “officer”. But they are not connected to any army, they said after the show. 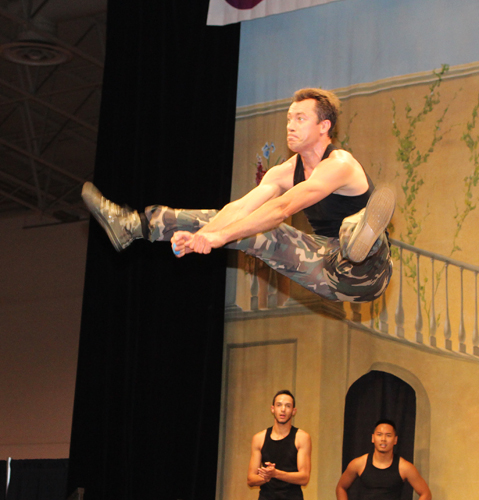 They first became internationally famous after appearing on the television show Britain’s Got Talent. They have appeared in films like Taken  which starred Liam Neeson, explained Maurice Chan, Team Manager and Artistic Director. Three of them met with me after the show. They looked like something from Toronto. Two were of Cambodian origin including Chan. Reda Oumouzoune, who plays the maligned officer, said his father was Thai and Moroccan and his mother was from the French Caribbean island of Réunion. Asked what that made him, he replied “French.” 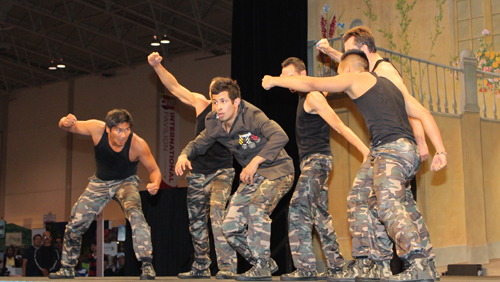 For a thrill, you might volunteer to be one of the seven people, over whom one of them does a broad jump. The group is worth watching, especially if you like slapstick. Their website is: www.cascade-demoteam.comand a video of their Britain Has Talent appearance is on: www.youtube.com/watch?v=2XK0g-uQp0E.

Also on opening day was a group from Toronto Dance Life with a wide variety of dances. They are only appearing once more on August 21 and are worth seeing. Among other dances, the seven performed a samba, paso doble,and a can-can with unusual partners. The can-can and later a ballerina dancing Swan Lake were partnered with a jeans-clad break dancer. The latter reminded me of CBC’s Battle of the Blades. Their costumes, produced by themselves, were impressive. Their dances were professional.

Most of the group are Toronto-based university students, said dancer and aerial artist Irina Okoulova. They were formed three years ago and hope to expand to include dances of different countries. Members are mainly Russian, Ukrainian and Polish. You can also see them each Saturday at the National Banquet Hall in Toronto and at events like weddings. Their website is: www.dancers.su 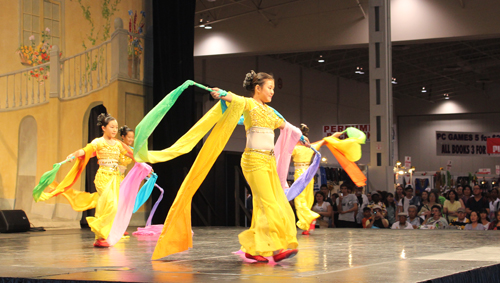 The Orient Dance Company of Toronto performed the lovely Chinese ribbon dance.The kids were cute but they did nothing new. It was performing only once. I couldn’t stay for another of the imports: The Recycled Orchestra from Paraguay.

About 25 different companies in total will be performing five times on each day except the last. If you do see the Paraguayan or any other group, please let us know how you like them. The Recycled Orchestra makes their instruments themselves from solid waste from the landfill in Cateura near Asunction where they live. I love their motto “The world sends us their garbage; we give them back music.”

If you want a front seat to take pictures, get there at least 30 minutes early. If you have time, look for the National Ethnic Press exhibit closer to the sand sculptures. It also personifies multicultural Toronto.

The International Stage is in Hall B, Direct Energy Centre which is near the street car terminal from Bathurst St. subway station.

For the daily schedule: http://theex.com/main/schedule/. 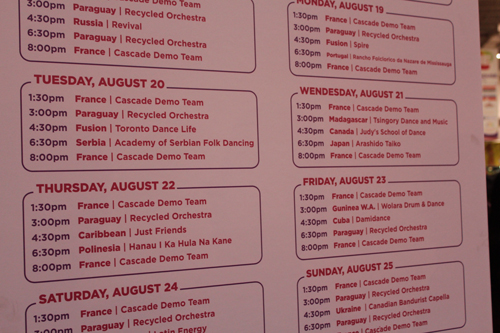