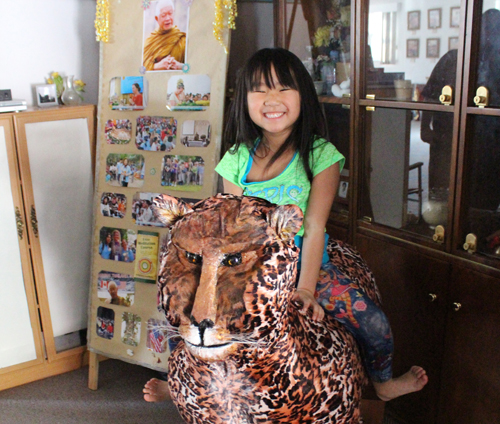 I met Yoke at a festival in a Laotian temple last November. She invited me to the Thai temple where she cooks for the monks once a week. I meet a lot of friendly hospitable people at festivals. I was curious too about how customs in tropical Thailand translated in frigid Toronto.

When I arrived at Yanviriya Temple in Richmond Hill, a sign at the door reminded visitors to remove their shoes. The hallway was full of snow boots. That was the first difference. I never saw snow boots in Bangkok.

Yoke was busy in the basement kitchen preparing lunch with two of her friends. It was March Break and their children were playing throughout the two-storey building. Later, one of them Janice, would pose on a tiger for a picture. The tiger would be ridden during the upcoming New Year Songkron Festival in April. 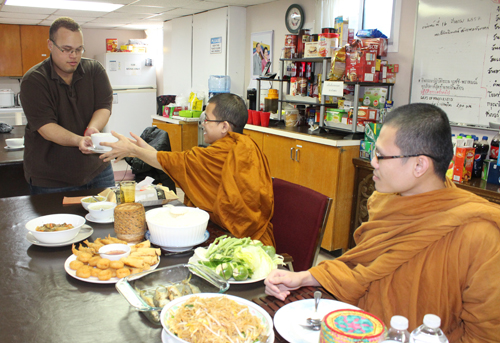 Yoke invited me to sit in the dining room as volunteers filled the table with food. Two monks Phra Ekkaruk and Phra Weerasak in thin saffron robes were seated at the table. I returned their “wai,” hands pressed together reverentially, and introduced myself. I remembered that monks are not allowed to touch women so no shaking hands. The two were young, I guessed in their thirties. I hesitated about asking complicated questions. I wasn’t sure whether or not I should be speaking with them.

In Thailand, one sees long lines of monks walking silently from door to door at dawn. They carry alms bowls which the devout fill with food for them to eat. Monks are not allowed to use money nor cook. They must keep their lives simple and concentrate on spiritual matters. They rely on donations. Here in Toronto, they can’t go door to door. Thai Buddhists live all over the city. Member of the temple like Yoke take turns cooking for them or taking them to restaurants. 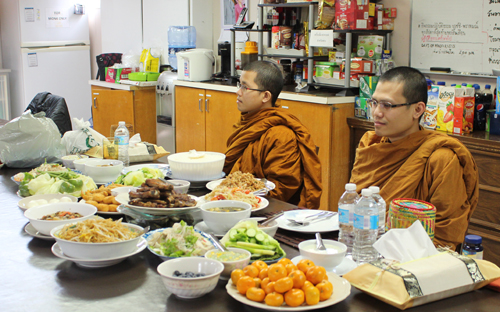 Fortunately for me, the women and their children spoke English, and a member of the congregation who was not Thai was there to help. In fact, some of the children spoke no Thai while Davis Riley was of Bahamian, Spanish, Barbadian, Dutch, French and Micmac origin—a long-time Canadian. Davis was taking meditation classes in the temple. He was in the process of becoming a Buddhist and knew a lot about Toronto’s Southeast Asian temples.

The lay people filled the table with one of the most lavish meals I have ever seen. There must have been 18 courses. What surprised me was the pork. I had expected monks to be vegetarian, but someone explained that Chinese monks, not Thai, were vegetarians. The monks accepted it all with quiet smiles. 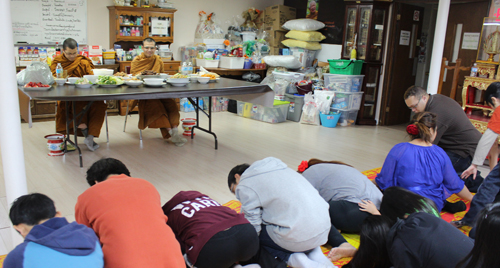 Then the women, children and Davis sat on a mat on the floor while the monks chanted for about five minutes. The lay people bowed three times after which the monks ate while Yoke went off to buy some medicines for them. The women and children went upstairs. 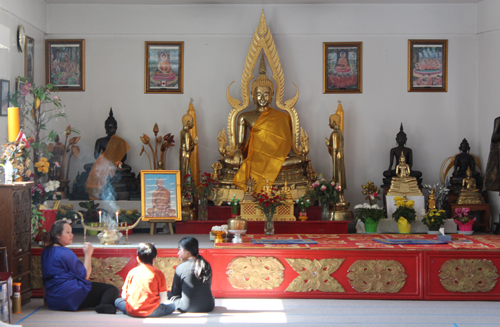 I spent the time exploring the temple with its beautiful Buddhas and the temple bell that was no longer used. Bells used to announce the time in Thai villages. That no longer is necessary. A gong is struck for ceremonial occasions now. Pictures of the life of Buddha were on the walls. 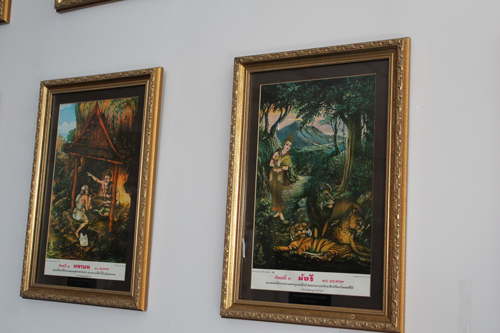 Copyright ©2014 Ruth Lor Malloy. there is no abbot in Toronto to consecrate them.

One woman lit candles and was teaching her children how to pray. Davis told me that the building used to be Jehovah Witness. He also said Toronto has a Cambodian and a Burmese temple. In Thailand, young men can be temporary monks – but this is not possible here because there is no abbot in Toronto to consecrate them.

When the monks had finished eating, the rest of us had a marvelous feast. The food was genuinely Thai: fish, shrimp, grass noodles, sticky rice, pork ribs, vegetables. The food reminded me of the previous festival I had experienced in this temple. And I hope that other Torontonians will take advantage of the upcoming festival on April 13 to meet some of their Thai neighbours. You might get invited to a meal, or vice-versa, and get answers to some of your questions then too.

Song Kratong starts about 10am on April 13 but if you want to sit on a chair, do come early. Most people will sit on the floor – Thai style. The ceremony goes on for a couple hours. (The Lao New Year is also on April 13. See www.torontomulticulturalcalendar.com)

For our blog about a previous Songkran event in Toronto, see: https://www.torontomulticulturalcalendar.com/2012/04/24/256-thai-new-year-songkran-festival/