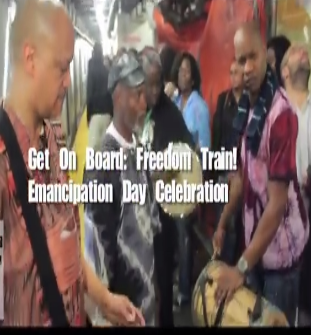 Ruth writes: Thanks to A Different Booklist, I learned today about Toronto’s Freedom Train. What a wonderful idea to commemorate not just Harriet Tubman, but Toronto’s and Canada’s role in the Underground Railroad. While we had to work out many unhappy racial issues ourselves (and still do), we should still remember that an estimated 30,000 African slaves from the United States found refuge in Canada – many in Toronto, especially from 1830 to 1860.

On July 31 at 11:15pm, hundreds of celebrants will be meeting at Union Station with drums, music and poetry to ride a symbolic underground subway train. Check out the video from last year’s ride: https://www.youtube.com/watch?v=PyoVNlIOoh4.