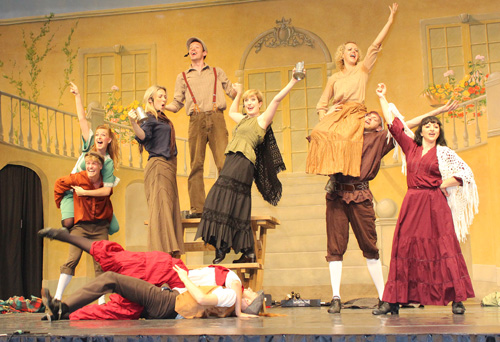 Founded in 1879, this venerable annual extravaganza of agricultural exhibits, carnival rides, contests, shows, merchandise sales and food is a late-summer Toronto tradition. It ends this year on September 1.

In the Direct Energy Building, the acts were introduced on the President’s Choice Financial International Stage by a lively master of ceremonies, Akim Burke.
He noted that the first act, the Irish group Taimid Seanachai, had developed their show “tailored for the Canadian National Exhibition.” Subtitled “A Celtic Evolution,” the story traced the journeys of the Celtic people through tales told by the “seanachai,” the Gaelic word for a storyteller. 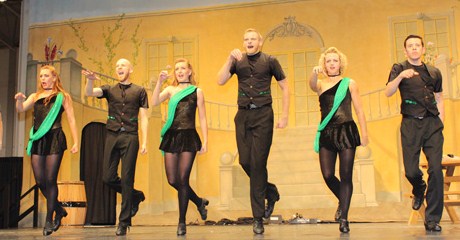 Eight dancers and singers dramatized through step-dancing, narration and song the everyday lives of the Irish people on farms and in social gatherings. It followed historical events such as Irish migration to Scotland in early times and to the New World during the potato famine of the 1840s.

The Gaelic tap dancing reached a height when two men wooed a girl through a tap competition – and she bested them both. In the end, said the storyteller, the Celtic people are “embracing the new, remembering the past.” 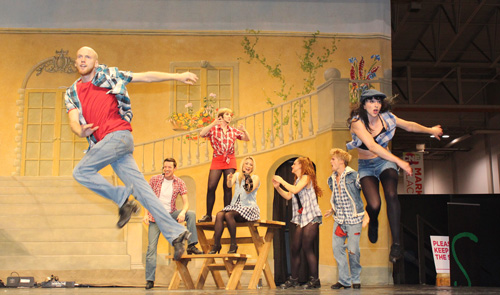 Facing adversity was also part of the background story for the Sainte Famille Choir from Haiti. This country is still rebuilding from the devastating earthquake of January 2010. They were performing for the first time in Canada and gave a concert at the Stratford Festival’s music program too. Burke also said the choir had sung a song called “We are All One Race” at a Canadian citizenship ceremony.

Made up of about 20 young adults between the ages of 12 and 24, recruited from the city of Jeremie and the local parish, the choir and its five-member band mostly performed songs in French.

In addition, empty backpacks were lined up along the front of the stage and audience members could donate $20 in each backpack. The money was for a foundation giving school supplies for a Haitian child. 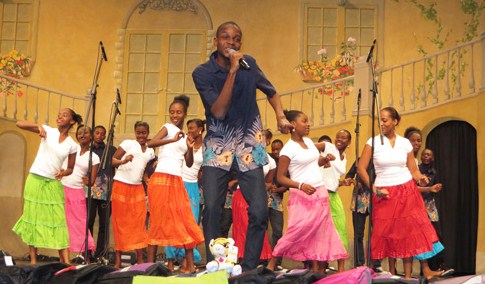 The colours of the Caribbean were on display in their costumes. They began their show in demure blue choir robes, then doffed them in favor of white blouses and brightly-coloured skirts. Given the travails of their home nation, regularly listed as the poorest country in the Western Hemisphere, the Sainte Famille Choir’s bouncy, upbeat show and their delightful interpretation of Pharrell Williams’ song, “Happy” was a testament to the human spirit.

Armenia, like Haiti, is a small nation, but unlike Haiti, it’s landlocked, squeezed by much bigger neighbors – Turkey, Iran and two former Soviet republics, Georgia and Azerbaijan.

The Sassoun Dance Ensemble of about 20 wore two sets of  traditional costumes, one of velvet with ornate braiding and beading. Sassoun is a region and city in what used to be western Armenia but is now modern-day Turkey. “The Daredevils of Sassoun” is an epic poem in the Armenian language about struggles against Arab rule in the 8th to 10th centuries, A.D. This dance group is from the Holy Trinity Armenian Church in Toronto.

In Armenian folk dancing, which traces its heritage as far back as the fifth century B.C., men are in the forefront, performing the most athletic routines. Their line dances are punctuated with energetic shouts. Women in the back wear long dresses and move through more with stately poses. 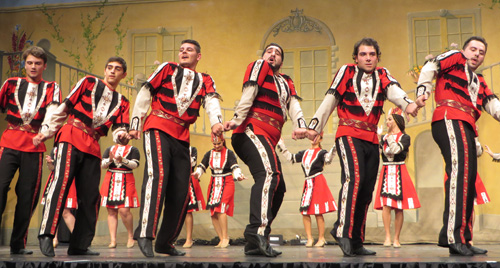 One typical formation performed by the Sassoun troupe was the “berd,” where a circle of men stands on the shoulders of another circle and the whole group gradually rotates. Berd means “fortress” in Armenian and is named because of the shape the dancers make. 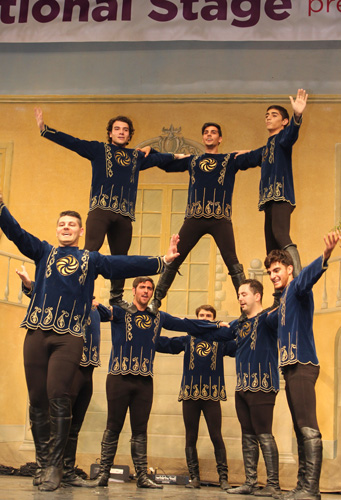 The afternoon was quite enjoyable but one suggestion to CNE management might be to give MC Burke some of the background information in this post, obtained through online research. Knowing more about the national and ethnic histories of these performances would make them even more meaningful.

Solange De Santis is a New York-based writer who covers the performing arts. Her blog: http://solangeontheater.blogspot.ca.
More images of the Sainte Famille are on our blog: https://www.torontomulticulturalcalendar.com/2014/08/21/506-opening-day-cne-international-stage-2014/. 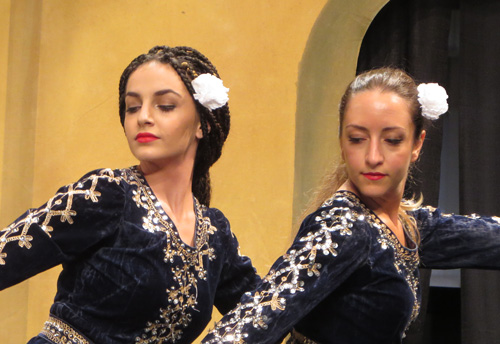