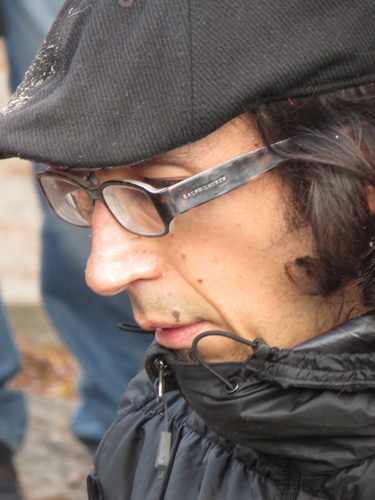 Ruth writes: I was curious about the 7A*11D Festival of Performance Art last Sunday. Never having been to a performance art performance, I wasn’t sure what to expect. The printed program was beautiful but not helpful. It listed the performers, the times and the dates. But a different artist was on stage than the ones listed for 4pm, the time I was there.

Roberto de la Torre was not really on stage. He started in the hallway of Artscape Youngplace which is an arts community centre at 180 Shaw St. He dug into a planter and tossed the earth out. He went around the room tapping the walls. He was obviously looking for something. He gave up on the building and headed outdoors. His audience of about fifty people followed him. 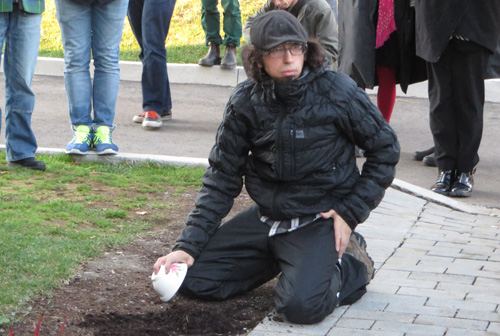 Outside, he found a bowl and then a spoon and dug in the garden beside the building. He laid down, ear to the ground, listening for something. He moved on and started evacuating bigger holes and unearthed four shovels. He asked us followers for help in Spanish and some of us obliged. 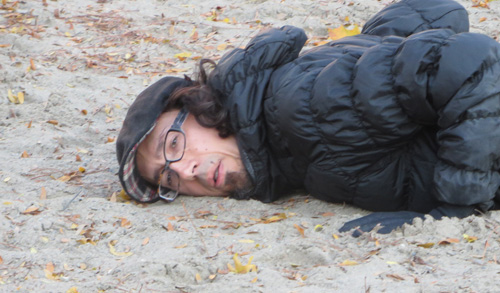 The spectators became part of the show. They shovelled with him making even larger, deeper holes. De la Torre concentrated some more, listening to the ground at various places around the building. 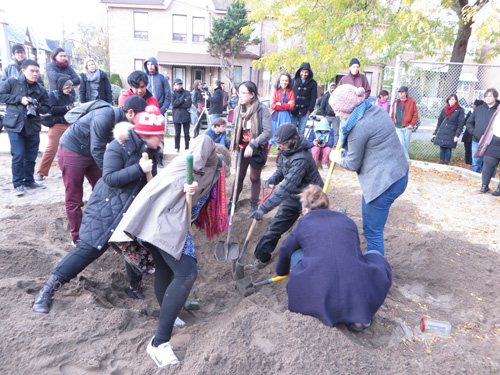 Then his volunteers began drumming with their shovels as he finally seemed to find what he was looking for – pieces of clothing, symbols of buried bodies perhaps. 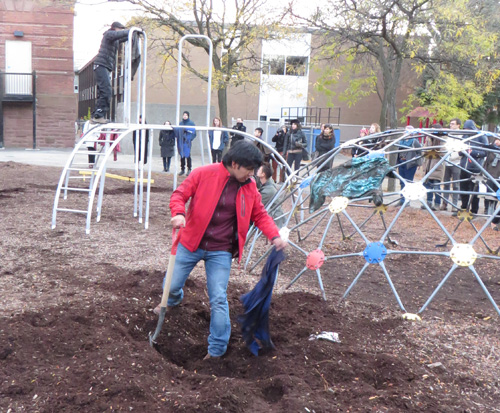 The metallic rhythm of the shovels on concrete seemed to grow louder and louder. He and his helper pulled out shirts and trousers and hung them on nearby playground equipment. I wondered about  a cadaver too. 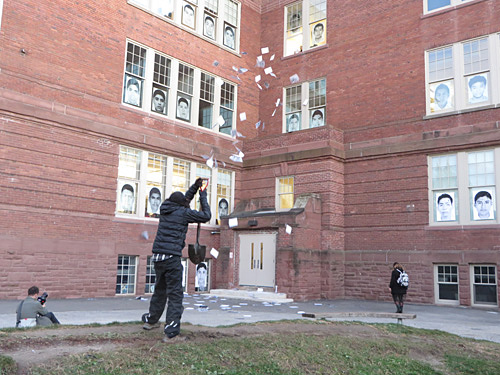 On many windows of Artscape Youngplace was a photo of a different young man. I didn’t connect the pictures with de la Torre’s work until a student from the Ontario College of Art pointed them out. From a top story window, someone threw out about a hundred white sheets of papers. Pictures of the young men were on each and on some, the words “Todos Somos Ayotzinapa”, “all are Ayotzinapa.” I had heard about the 43 missing Mexican students. It took me a while to make the connection. I went to look at the papers. The drumming stopped. 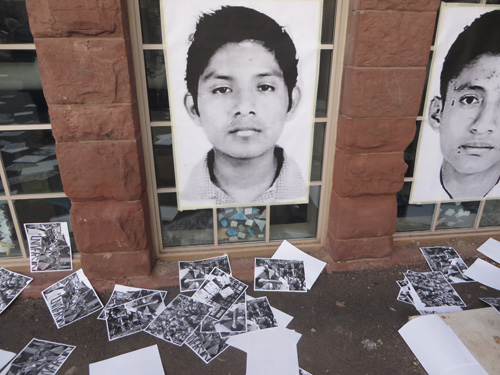 It was a powerful presentation. Our physical involvement meant an emotional involvement. I didn’t think I could take another performance like it at that moment, though more were scheduled. I was shivering.

Back home, I looked up “Todos Somos Ayotzinapa” on the Web. “On September 26th and 27th, 2014 in Iguala, Guerrero, Mexico, 43 young students from Normal Rural de Ayotzinapa ‘Raúl Isidro Burgos’ went missing while being in the custody of Iguala’s police force.

“In an effort to demand justice from Mexican authorities, we are making their names and stories visible” read http://ayotzinapasomostodos.com/en/ . The performance with members of the audience participating had made the tragedy very real.

The variety of international performers we attract to Toronto is amazing. Roberto de la Torre came from Mexico to take part. The festival also had artists from such countries as Finland, Germany, Italy and the USA as well as Canada. I am looking forward to next year’s festival and I hope the Mexicans will find their students.

Please let us know about your adventures in multicultural Toronto. Write us at: ruthlormalloy@gmail.com.