464. Searching for Uniqueness in Multicultural Ottawa – 2015

At a Christmas party last year, I won a $500 “Gift of Ontario”. I hadn’t been sightseeing in Ottawa for decades so I used the money towards two nights in a hotel and tickets on tour buses so I could search for multicultural attractions there. This along with a three-day travel writers’ conference gave me five days in our capital to hunt for unique sights that I can’t find in multicultural Toronto. Our city is considered the most multicultural city in Canada, in the world. I wanted to see if Ottawa had anything we didn’t. 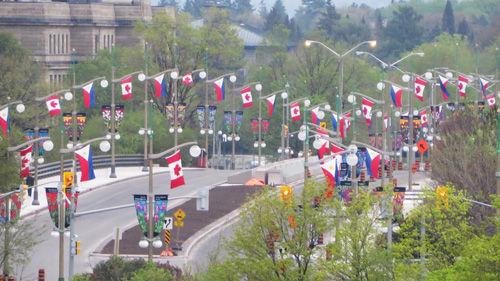 On my first day there, I couldn’t help but notice the flags – hundreds of flags of the Philippines! What a surprise! The tour guide on our Hop-On-Hop-Off bus thought they were Malaysian. He corrected himself later. He did say that Ottawa puts up flags along the routes used by visiting heads of state. I hoped President Aquino and his huge entourage noticed. I don’t think we put up more than one flag for important guests to Toronto. Or do we? 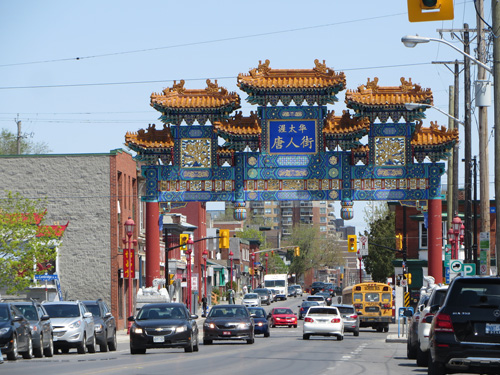 I wanted to compare Ottawa’s Chinese gate to Toronto’s two. I thought it more intricate and a real gate, unlike our doorway to the Broadview-Gerrard Chinatown. That gate is on one side of a parking lot. The Ottawa gate was worth seeing and driving through. Friends told me about the drag queen who does her thing in Chinatown on Saturday evenings. I haven’t found a Chinese drag queen yet in Toronto. 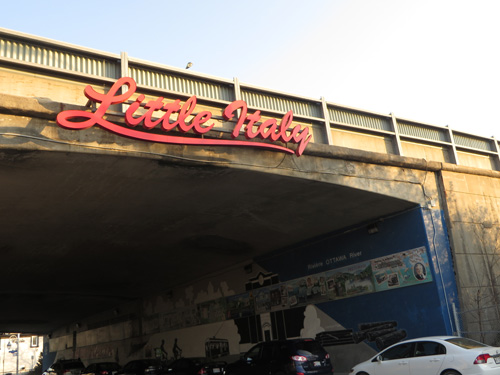 Nearby were huge signs marking the boundaries of Ottawa’s Little Italy. Two of them were lighted up in red after dark. Unlike our street signs in our College Street Little Italy, no one can miss them. 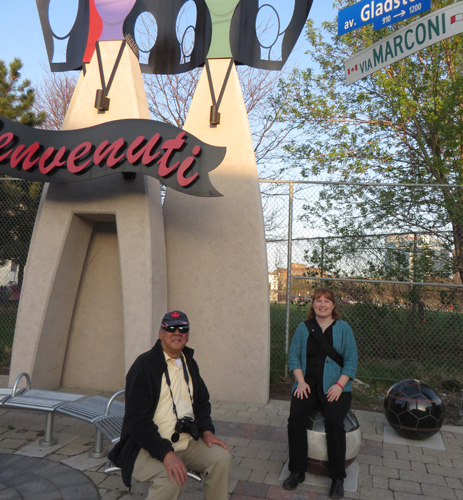 Nor can anyone miss the huge murals on The Pub Italia. 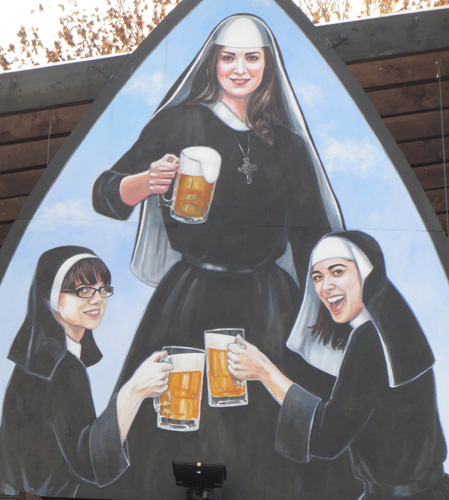 My visit coincided with the opening of the Tulip Festival. To thank Canada for its help during World War II, the Netherlands gave us 100,000 tulip bulbs. Today, Ottawa’s National Capital Commission plants 100,000 tulip bulbs in 30 different sites. It has fireworks too. 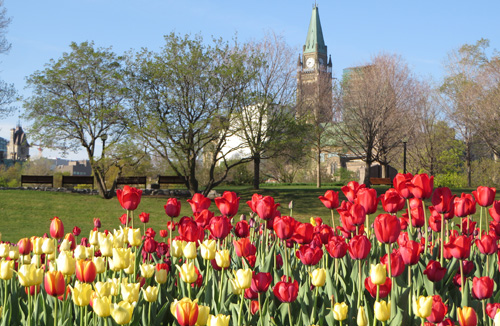 Of course we have our cherry blossoms in Toronto, but you have to risk parking fines and traffic jams in our High Park. Tulips are all over Ottawa – great beds of reds, whites, pink and yellows. You don’t have to line up there to take pictures. 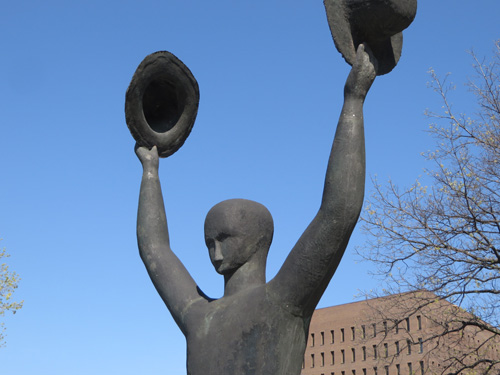 Along Dow’s Lake where masses of tulips were blooming is a statue of The Man with Two Hats. It is by a Dutch artist. A similar statue is in Apeldoorn in the Netherlands, a twin symbol of the special friendship we have with that country from World War II. 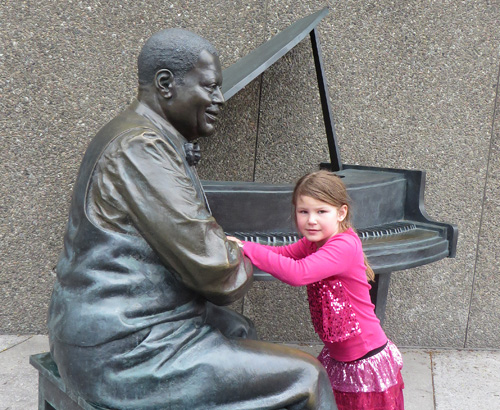 Friends told me about the statue of jazz-great Ontario-born Oscar Peterson at the National Arts Centre within walking distance of Parliament Hill. You can hear the sounds of his music there too. Peterson lived in Mississauga where we have Oscar Peterson Square, the Oscar Peterson School, and a U of T student residence named after him. But no prominent lively downtown statue with music! 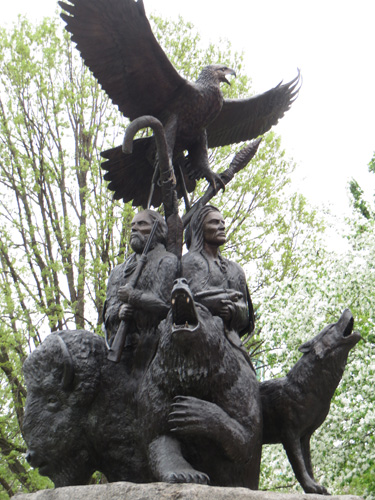 Nearby in Confederation Park is the magnificent National Aboriginal Veterans Monument that “commemorates the contributions of all Aboriginal peoples in war and peacekeeping operations from World War I to the present.” The artist Noel Lloyd Pinay is from the Peepeekisis First Nation in Saskatchewan. Where are Toronto’s First Nations sculptures? 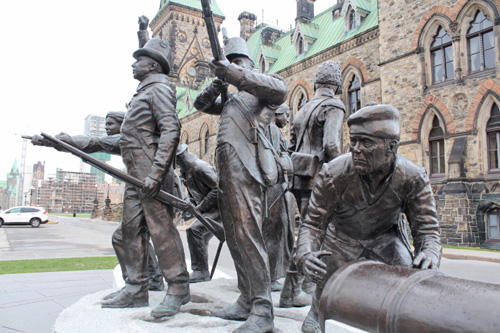 Another important piece is the War of 1812 monument Triumph Through Diversity, right by the East Block of Parliament. It was unveiled last November. Its figures represent the Metis, First Nations, women, Royal Navy, Canadian militiaman, British army and the French—all of whom fought against the American invasion. Of course we have Fort York and the tin soldiers but no piece of commemorative art as all inclusive as this. 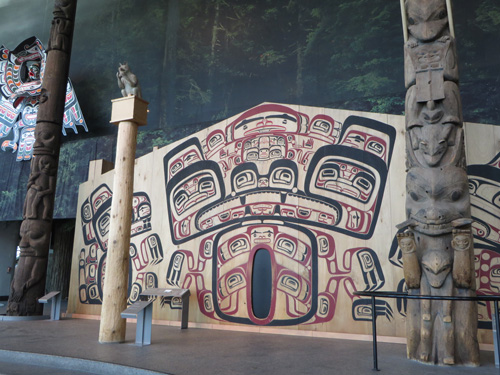 As for Ottawa’s museums, okay, they are national, not provincial. Our Royal Ontario Museum has huge totem poles too, but Ottawa’s Museum of History (formerly named the Museum of Civilization) has a record number of them and huge First Nations art. It is worth taking a trip to Ottawa to see them. In addition, Ottawa’s museum is currently upgrading two floors of exhibits to be opened for Canada’s 150th anniversary in 2017. It will include “the contribution of all immigrant groups to our history”. 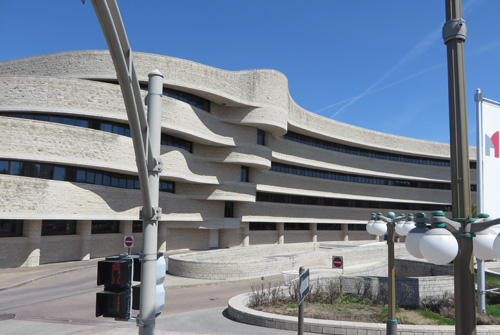 The Museum of History is also worth seeing for its architecture. Douglas Cardinal was born of Metis and Blackfoot stock in Calgary. He also worked on the impressive National Museum of the American Indian in Washington, D.C. Both buildings have aboriginal features. 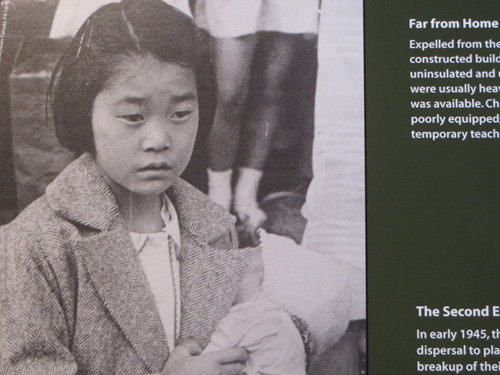 I spent more time at the Canadian War Museum than at the Museum of History. It dealt more with our multicultural heritage, our involvement in foreign wars like South Africa, and the effect of wars on Canadians of Ukrainian, German, Serbians, Croatian, and Japanese backgrounds. Many of these people were locked away, their belongings seized. The architect of the war museum was Japanese-Canadian Raymond Moriyama who was  also the architect of the Canadian Embassy in Tokyo and the Ontario Science Centre in Toronto. Moriyama was interned as a child along with 22,000 Japanese Canadians in British Columbia after Pearl Harbour. His father was sent away to Ontario; his mother was left behind with $34.92 and three children. Thank goodness he’s forgiven the rest of us and built us this magnificent structure. (http://www.magazine.utoronto.ca/all-about-alumni/raymond-moriyama-architect-canada-japanese-pow-camp)/. 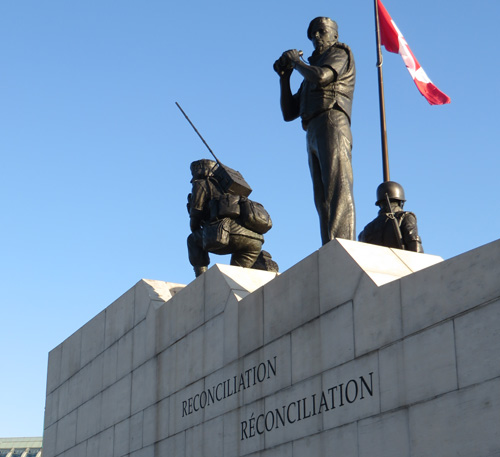 I was thrilled to find the Reconcilation Monument that lists Canada’s peacekeeping activities of which many of us are so proud. I hope it is not a monument to the end of our peacekeeping.

I was delighted to find that the Aga Khan is turning the former War Museum Building at 330 Sussex Drive into the Global Centre for Pluralism. “Advancing respect for diversity as a new global ethic and foundation for inclusive citizenship is the mission of this centre” says its website at: http://www.pluralism.ca/index.php?option=com_content&view=article&id=157&Itemid=618&lang=en.  I look forward to its opening which our guide said was next year.

But I must say the highlights of my Ottawa trip was interacting with Ottawa’s people. Jantine Van Kregten of Ottawa Tourism and friends of long-standing Chris Dodge and Brenda van Katz helped in my search. In the Byward Market I discovered charming Ryoko Itabashi in a kimono, playing Japanese music. In front of her was a sign “You are helping me share traditional Japanese music with my new home – Canada.” 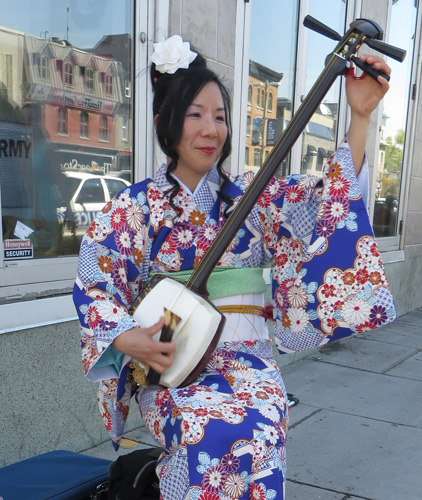 Then there was the Indian wedding in the driveway of the Westin Hotel. I hadn’t seen an Indian wedding since I lived in India, the groom arriving on a white horse. In spite of all the South Asian bridal shows I’ve been to in Toronto, I’ve never seen any sign of this very Indian tradition. The horse’s handler said he services about four weddings a year in Ottawa, more in Montreal. 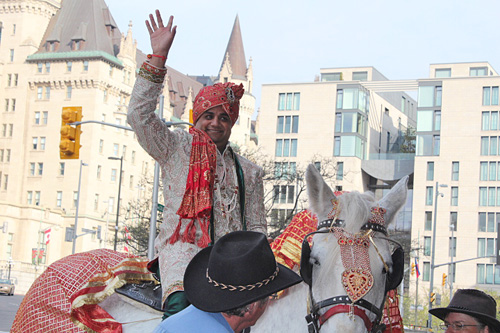 And there it was, right in front of the Westin Hotel. Family and wedding guests were dancing to the beat of drums, laughing as they lifted the groom and dancing with him on their shoulders. The mood was infectious. I found myself dancing with them. 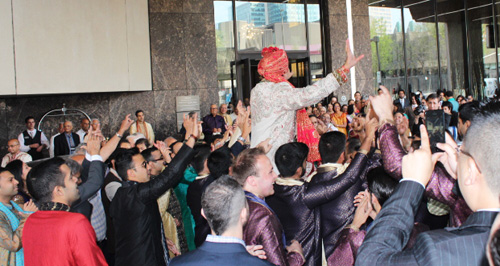 Then there was my meeting with the Vietnamese who were working on a Vietnamese Boat People’s Museum for Ottawa. But that’s another story. Relating to the residents is so important in the enjoyment of a city that I’ll be listing some of Ottawa’s diverse festivals in a blog soon too. Festivals are a good place to meet them. So please stay tuned, and in the meantime, let me know of other multicultural experiences you’ve had in Ottawa that others might enjoy.

My trip was made possible by “Ontario Yours to Travel” at ontariotravel.net, VIA, the Novotel Hotel, Gray Line Ottawa, the Society of American Travel Writers, and my husband. You might win a trip too at: http://www.attractionsontario.ca/summercontest/Home.aspx.