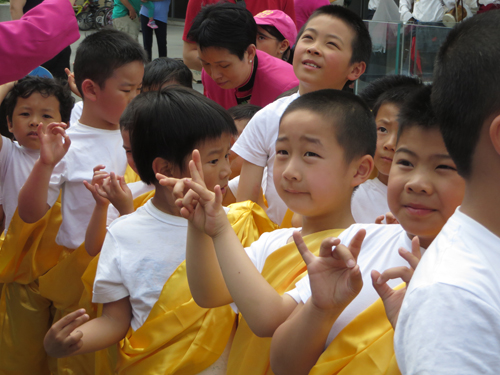 Ruth writes: I used to suggest that visiting a Buddhist temple during a festival was the best time for newcomers to learn about Buddhism. Its temples are decorated with lanterns and flowers then. Worshipers burn candles and wear beautiful traditional clothes. Monks and nuns perform rituals and chant special prayers. In many cases, services end with banquets of home-made Thai or Tibetan or Sri Lankan food depending on the temple. The food is shared by all while visitors can chat if they wish with some Buddhists. Some outsiders have told me they are interested but they don’t know what to say. 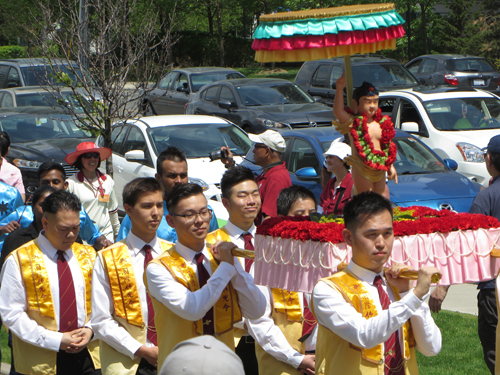 I only recently learned about the May 24 celebration of Buddha’s birthday in the Mississauga Celebration Square. This was the third such annual event. How could I have missed it before? Of course I had to see it this year. I hope you will add it to your list of festivals to experience next year. It was very interesting.

This festival showed the diversity of our Buddhist community as well as its main teachings. While visits to temples can include long chants and rituals incomprehensible to newcomers, this joint event involved over twenty different Buddhist temples and meditation centres in the GTA. It included a parade, different vendors who could answer questions, some prayers, and a wide variety of cultural performers. You probably won’t see as many Buddhist monks and nuns in one place in Toronto anywhere else. 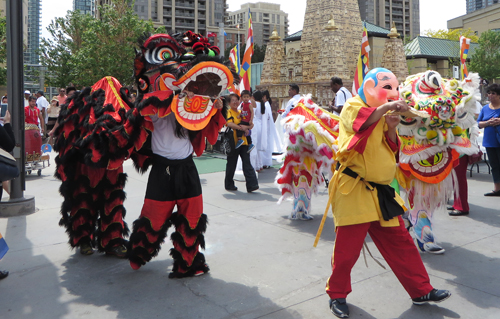 I was there only for a couple hours. I was able to see the parade that started with a Chinese lion dance. 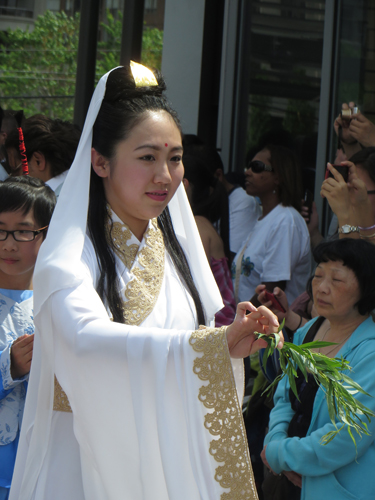 The parade included a beautiful woman holding a vase who looked like a statue of Kwan Yin (Cantonese), the Goddess of Mercy. She is also known in Mandarin as Guanyin, in Japanese as Kannon, and in Tibetan as Chenrezi. 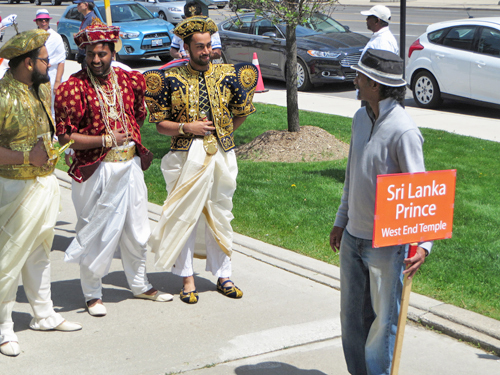 The trio labelled Sri Lanka Prince puzzled me. I guessed that one of them must have been Prince Siddhartha who started Buddhism. 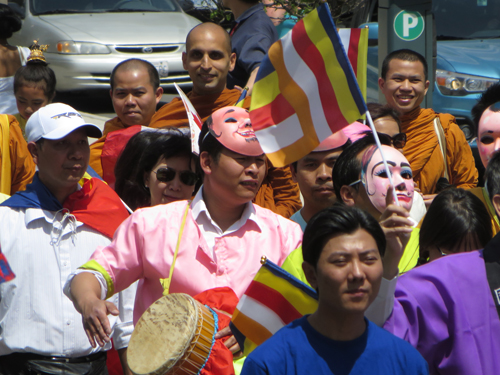 A group wearing masks also puzzled me. I’ve lived in several Buddhist countries but never saw anything like this.  I made a note to ask about these people later. 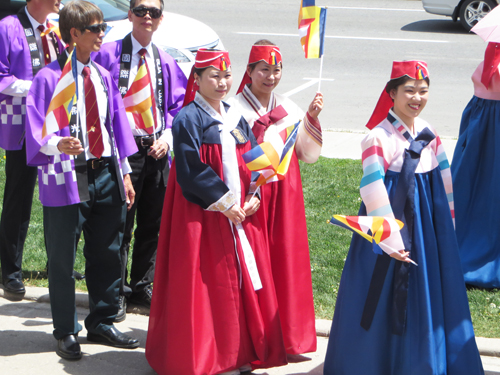 Some people were dressed in Vietnamese, Korean or Japanese costume. Those in Korean later told me that they were actually Chinese. They dressed as Koreans to show the diversity of Buddhism which was founded over 2500 years ago. 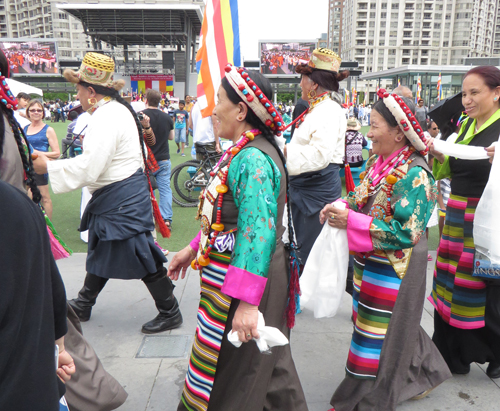 I do think that the Tibetans were genuine. 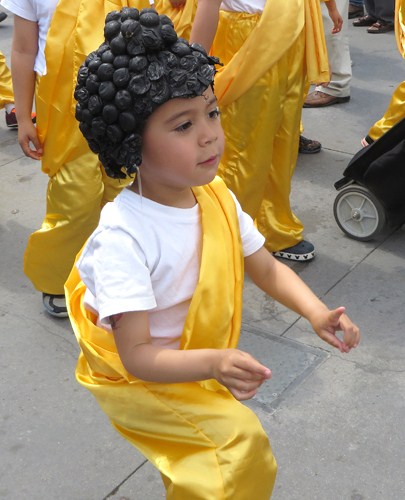 At the end of the parade I saw the Little Buddhas wearing caps on their heads. The caps made them look like they had the spiraling curls found on many Buddhist statues.  They were so cute.

The parade took about half an hour as it proceeded around the streets outside the square and then inside the square. Over forty monks and nuns in robes ranging from black to saffron were in it too. They were accompanied by Mississauga Mayor Bonnie Crombie who apparently did the circuit in high heels. It must have been at least a kilometer. 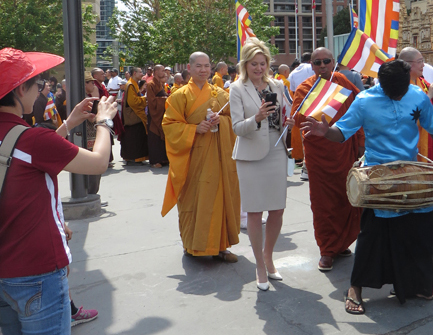 Inside the square, the monks, nuns and some of the local dignitaries stopped to offer flowers and expressions of worship or respect at a replica of Bodhgaya, a temple in India. There, Prince Siddhartha, the Hindu prince who gave up his privileges to search for the meaning of life, found answers to his questions about suffering and old age. 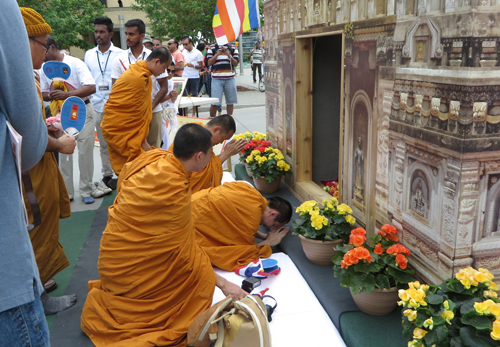 While the parade was going on, I visited the various stalls. Bellana’s Kitchen was selling vegetarian Sri Lankan food. I later learned she had a restaurant in Brampton. I must say that her roti were so delicious, I made a note to look up her restaurant on my next visit to Brampton. 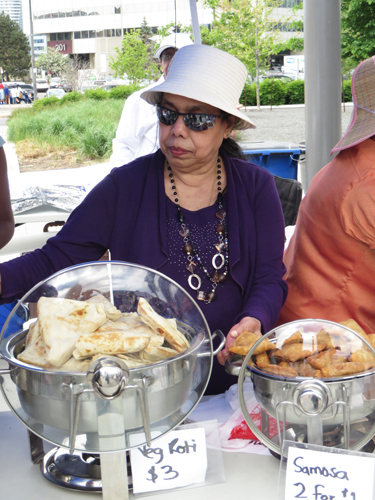 The square was decorated with Buddhist flags. I only saw one Canadian flag. It was indeed a very colourful and well-organized event as volunteers along the parade route in the square greeted everyone with waving flags. 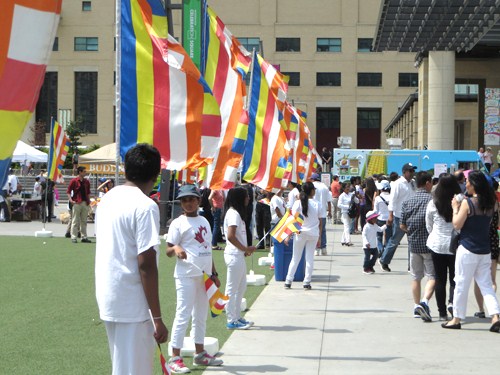 The monks and nuns rested a few moments after the parade. 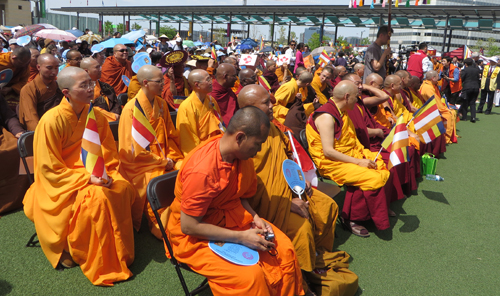 Then they climbed the stage to chant prayers which were not as long as they would have been in their own temples. For this, outsiders can be thankful, as listening to something one cannot understand can be tedious. 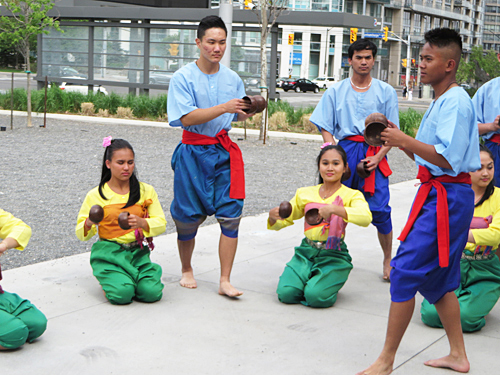 Then I visited a couple more stalls. At one, young people were practicing their performance. It was wonderful being able to get close to them. The costume appeared to be Thai but they were from the Khmer Temple which is also known as the Cambodian Temple. 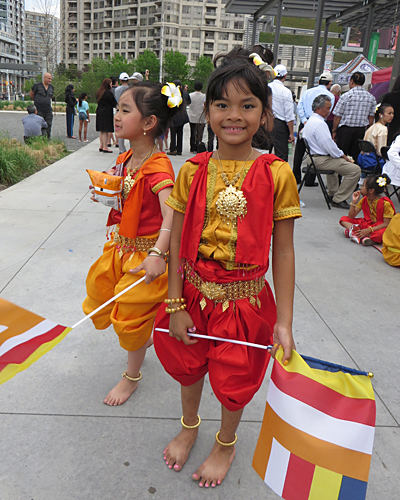 Other much younger dancers were not yet ready to perform, although they were in traditional dress. They were more interested in an I-pad. But they were willing to pose for my camera. I was standing beside Veasna Thach, who explained that one of the Khmer groups was from Cambodia and the other from South Vietnam, but their culture was the same.

If I had stayed, I would have seen each monk or nun pouring water reverently over statues of Baby Buddha, a ritual of respect and cleansing, a purification of the body, a cleansing of greed, anger and ignorance. There were also performances by members of various temples. If you want to see those, and they are worth seeing, click on: https://www.facebook.com/media/set/?set=a.645109662290810.1073741835.404902729644839&type=1 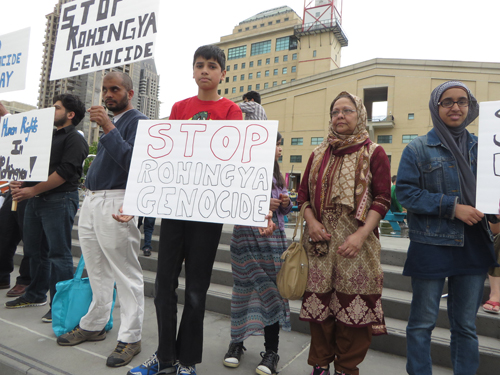 As I left, I found a dozen or so peaceful demonstrators, their signs indicating support for the Rohingya, a Muslim minority group being persecuted in Myanmar, one of the Buddhist countries. They stood quietly along the northern edge of the square. Their placards read “They are human too. Just like you. Just like me.” Here were more questions visitors could ask the Buddhists, especially those from Burma. Why are Buddhists who preach compassion for all sentient beings persecuting these people who are now fleeing for their lives in boats from Burma, a country where they have lived for generations?