Sorry, but I only knew about this event a couple days ahead. I didn’t have enough time to post a blog about it but I felt I had to go to this  two-day show  myself though.

Refugee art is not meant to be beautiful of course. At this exhibition, some works were painful to see. Bloodied hands and haunted eyes expressed memories of horrible torture. Such pictures are best used on covers of books about failed states and political prisoners. I could not imagine them on living room walls.

I thought it was great that such refugee artists had an opportunity to share their feelings with other people. It was good to talk with them, to be reminded of a world outside the comforts of Toronto. 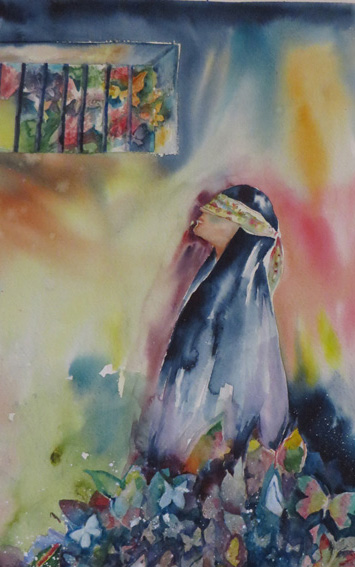 But pictures of beautiful flowers and butterflies were also in this exhibition. We talked with one artist whose name I cannot disclose. She had been Imprisoned for painting anti-government posters in her native Iran when she was 23 years old, She spent four months of her five prison years in solitary confinement, unaware of where she was. Her guard told her she was in “The Grave”. She was continuously blind-folded and forbidden from talking. She realized that she wasn’t in a grave and that there were other people around when she briefly saw a fly in the bathroom and scratchings on a wall that said, “One day, this day will pass” and then she knew she was not alone. She felt some fresh air and decided there must be a window.  She imagined herself a cocoon that one day would be a butterfly. Several years after her release, she secretly  painted this picture of her ordeal and gave it a title. She called it in English “In Hope for Being Butterflies”.  In 2011, she came to Canada and was granted refugee status and now wants to do paintings for Syrian refugees. She understands their struggle. She wants to help.

Her powerful inspirational image and story of tragedy and hope was worth going to the exhibition to experience.

A painting from the exhibition that will end up on a living room wall was one by artist Abdul Wahab who came to Canada as a refugee in 1990 from Djibouti in Africa. His image of the main square in Djibouti from the still vivid memories of his childhood there shows  policemen in French-style uniforms, their Volkswagen van, telephone booth, and cafes. He painted it in Toronto. With vibrant colours, it was such an amazing painting that I asked to visit his studio later to see more of his works. 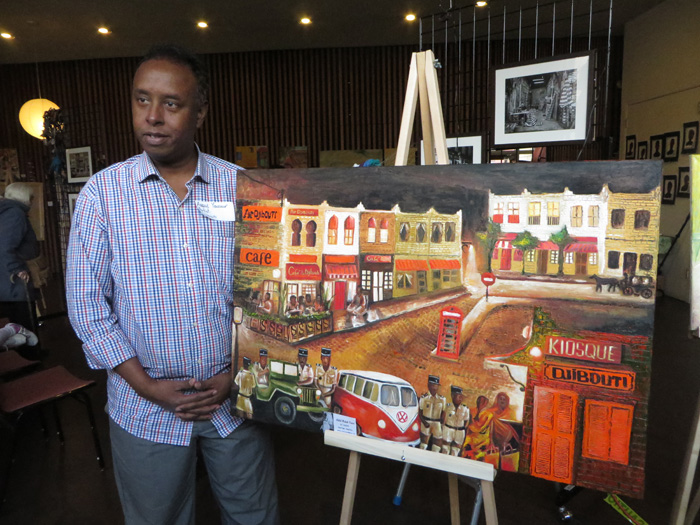 Most of his pictures were about Djibouti but he had paintings of hands knitting Canadian and U.S. flags. He is currently working on scenes of old Toronto and has thoughts of a street scene with people waiting in the snow for one of our unique street cars at 7pm. He likes the light then. So do I.  I was pleased to see him moving away from nostalgia for his birth country and doing Canadian. 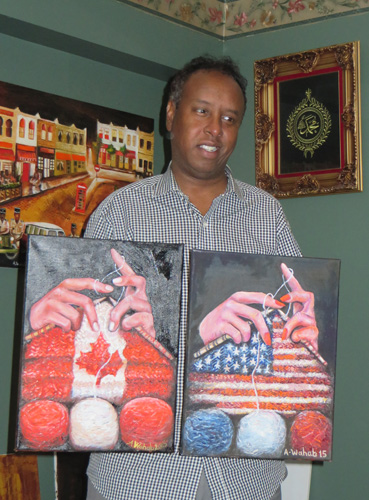 Another exhibition of refugee art will probably be organized in the future, said Eusebio Garcia who helped to produce this one. He is the Refugee Settlement Worker for the Society of Friends, Quakers.  I hope to get more notice next time. Hopefully more people will then learn about the many hidden treasures in our city, works of art that present the stages in the development of artists who have escaped tragedy to live here in Toronto.