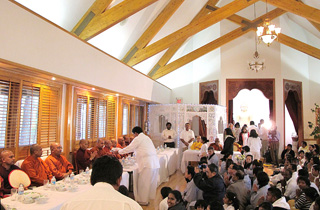 Do you have to take off your shoes and wear something on your head in a Sri Lankan Buddhist temple?  Yes to the first; no to the second.

Was the Robe Procession a good opportunity for learning about Sri Lankans and Buddhism? Yes and no. While waiting for the robe procession to appear, a few of us stood on the veranda out of doors. There was time to ask a few questions. Inside, it was very noisy, not conducive to conversation.

People said this temple has five resident monks. The rest of the 25 monks there last Sunday came from places like exotic Brampton and Mississauga. Later, I was able to talk with one from Hong Kong just before he was served lunch. A dozen or so Vietnamese Buddhists in gray, floor-length tunics seemed to be the only non-Sri-Lankans there besides one or two Caucasians, the Hong Kong monk, and myself.

Downstairs in the food department, it was great. There were fewer people. It was quieter at first.  I had to leave before the rest of the congregation gathered to eat.  The whole event went on for over four hours.

Altogether, I spoke with about a dozen people: asking for directions, explanations, and permissions to take pictures. What was going to happen next?  Where should I go? Everybody was pleasant and welcoming.  Members of the congregation even volunteered advice about the best places to take pictures.  All but one spoke excellent English.  I felt welcomed but this was no time for a discourse on Buddhism.

Although almost all the sermons were in Singalese, a language I don’t understand, I found it easy to meditate instead of listening. A beautiful statue of the Buddha, the embodiment of meditation, was in the room after all.

Downstairs, one woman warned me about the spices in the food, which dishes were mild, and which ones were fiery hot. There were lentils, snow peas, rice, and kale, all vegetarian dishes because of the religious occasion. She ate the chilis. I avoided them.  I didn’t see my favourite Sri Lankan noodles and fried eggs but they might have come later. The children were eating chutney on bread.  I found a box of ice cream.  They have bread and ice cream in Sri Lanka too.

“Yes, we want other people to visit with us,” said Ushieja, the young woman with the horn in the procession.  We had to move to the stairwell to make ourselves heard. I made a note to phone her and the monks later for a talk.

The event was a good place to meet people and make contacts. A follow-up was needed.