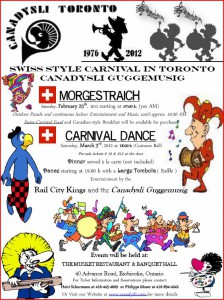 A little bit of Switzerland appears in Toronto’s streets every year. This year it’s Saturday, February 25, but you wont see it unless you get up early. From about 7am, you could experience some of the flavour of Basel’s Morgestraich parade and the Basler Fasnacht or Carnival of Basel, Switzerland’s biggest festival. The Toronto  parade starts out from the Musket Restaurant in Etobicoke and goes around the block. The attraction is not just a band dressed in funny costumes, and the Swiss carnival food served along with Canadian breakfast in the restaurant. It’s also the enthusiasm of the participants. It’s a lot of fun. You might want to join the parade yourself.
Watching the parade is free of course. You have to pay for the food but there’s entertainment inside the restaurant too. You’ll probably need a cup of coffee anyways. The Musket is at 40 Advance Rd., Etobicoke. For information, contact Heiri Schurmann at 416-445-4609 or Philippe Moser at 416-894-4242.  For our report of the 2011 event, see http://bit.ly/AwBv15 . For the group’s web-site: http://www.canadysli.com/ .