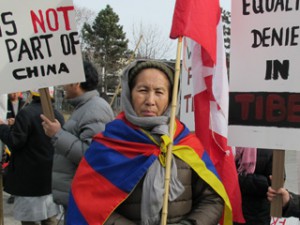 Our Toronto Tibetan elderly are tough. On March 10, they spent 30 minutes at a rally with almost a thousand younger Tibetans. They stood in front of Parkdale Collegiate in minus 10 C weather. Then they marched from there to Yonge-Dundas Square, a distance of about 5.5 kilometres.

The parade was led by monks carrying a portrait of the Dalai Lama. The protesters were waving Canadian and Tibetan flags and shouting slogans in English: “China Stop Terrorizing Tibet,” “Free Tibet,” and “Long Live Dalai Lama.” Many wore traditional Tibetan dress. 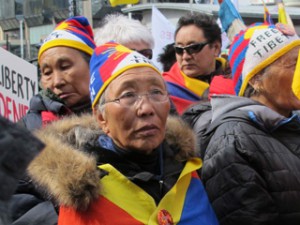 After that, the elderly stood for at least an hour in the cold – okay it was warming up a bit, but  it was still cold. They chanted prayers together with the monks to the rhythm of drums and the mournful deep groans of long horns.

The organizers played the Tibetan and Canadian national anthems. Most of the older ones knew the words of the Tibetan anthem but few knew the words to O Canada. Those holding flags and banners kept waving them. Then there was another minute of silence out of respect for the monks who had self-immolated in Tibet as a non-violent anti-Chinese protest. 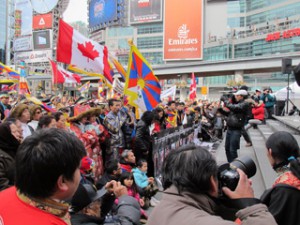 After that all listened to leaders denouncing China. One long letter was from the headquarters of the Tibetan Government in Exile in India. It complained at length about the Chinese government. The speeches were in English. I didn’t think the older Tibetans understood. I gave up after an hour of standing, and wandered around the Square.

The square was about a third filled with demonstrators, a few of whom were obviously not Tibetan. There had been about a half dozen non-Tibetans in the parade. I photographed two of them holding up signs. It was good to see these others showing support and interest. 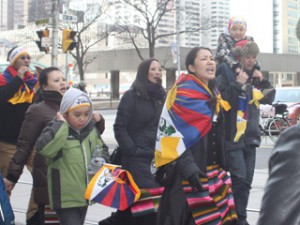 Many of the younger people didn’t seem interested in the speeches. They were wandering around the square chatting with their friends.

I counted five tents. The most interesting held monks in maroon robes chanting prayers in time to the beat of their unique drums. Another had a display of beautiful thankas or religious scrolls. A third exhibited Tibetan medicines. I wondered if the elderly still used these herbs.

I was pretty cold and tired by then even though I hadn’t done the march. When I left to go home, most of the demonstrators were still standing. Bottles of water were still undistributed. Only a handful of the older people were sitting.