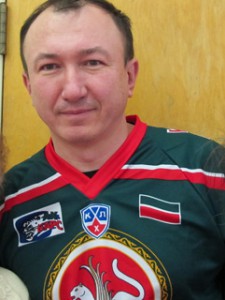 I didn’t know what to expect. The notice in NOW said the event was called “Nevruz.” It was “celebrating spring and the cultures of Turkey, Azerbaijan, Uzbekistan, Turkmenistan and others with food, national costumes, arts, music and more.” I had been to Uzbekistan and Turkey as a tourist, and had lived in neighbouring Kazakhstan. I jumped at the chance to re-connect with that fascinating part of the world.

As for “Nevruz,” it sounded like Norwuz, the Persian New Year, just past. Norwuz is also spelled NowRooz, NoRuz, and NoRooz and a couple other ways. That festival with people jumping over bon-fires had been worth the trip out to far away Richmond Hill.

The Nevruz event was at the Nile Academy near Islington and Finch. I was curious. I looked it up on the Web. It seemed to be a private school with a lot of Muslim students. It looked like it was Turkish. I had expected Egyptian.

We met one of the students in the parking lot as we arrived. She said she was studying English, French and Turkish. 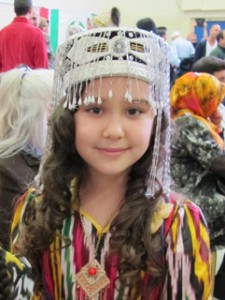 Within a minute of entering the school auditorium, a friendly, good-looking guy in a hockey shirt introduced himself. Anyone who loved hockey would soon be talking hockey with him. Arslam was from Tatarstan, though he grew up in Uzbekistan, in Tashkent. He loved hockey and supported the Tatarstan team. He told us about the white wolf on his hockey sweater. He had a good job in Toronto but he was going back to Uzbekistan because his mother was still there. The Canadian government was making it too difficult for him to bring her to Canada.

Arslam introduced us to his 85-year old friend who had survived a German prison camp. He too was from Uzbekistan, a descent of Genghis Khan and Attila the Hun. This was nothing new to me as people all over Kazakstan also used to tell us how busy those conquerors had been. They asked us about our origins. It was one of the friendliest festivals I have ever been to in Toronto. 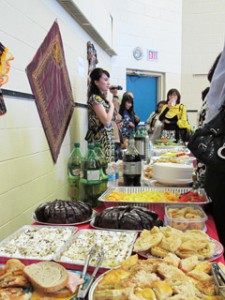 Students from the Nile Academy sang the Turkish and Canadian national anthems from the stage. Then they sang songs in Turkish. It seems the countries represented were all culturally related to the Turkic language. Arslam said he could understand much of the other languages spoken at the event.

The hall was lined with tables, each with a sign or flag on the wall behind. They were in Turkish but understandable: Ozbekistan, Turkiye, Azerbaycan, etc. For the first hour, people kept loading the tables with delicious-looking food – plates full of baklava which is spelled “pakhlava” there, I think. One pastry looked like hanks of thick, deep-fried twisted yarn-like dough. It was sprinkled with icing sugar. I snapped off a piece and wasn’t disappointed.

There were dishes labelled “waq beles” and “cek-cek.” There was samsas, yupka pancakes, and plov which was rice with raisins and meat. As soon as dinner was announced, over a couple hundred people started to line up. It was all free. It was exciting sampling all the different dishes. 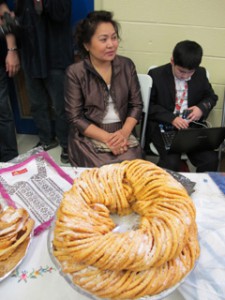 Some of the women and girls were dressed in brightly-coloured ikat-woven silk, typical of Uzbekistan. The fabled Silk Road went through their ancestral homeland. One woman, whom I had seen before at a Russian festival at Yonge-Dundas Square, wore a Siberian costume. I didn’t understand the name of her homeland.until she pointed to a name on a wine bottle. It said “Yakut.” Her country was Yakutia. Have you ever heard of Yakutia?

Most of the people we met spoke English. One of the women taught Azerbaycani in a heritage class. She had 25 students.

It was a wonderful event. I was sorry we had to leave after two hours. I was sorry too that there were only a couple other people there who didn’t seem to be from Central Asia. These people from the “Stans”of Central Asia were very welcoming.

I didn’t want to lose the connection so I asked some of them for their business cards. I also asked for a good Central Asian restaurant in Toronto. Arslam said the best was the Tajikistan at Keele and Finch. I hope I’ll see you there sometime. Or at the next Central Asian festival. Please stay tuned to: www.torontomulticulturalcalendar.com .