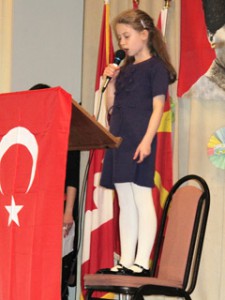 Arriving late, I missed the national anthems of Turkey, Canada and Macedonia. In addition to the Turks and Macedonians, there were other performers: Indian, Azerbaijani, Uzbek, and Iranian, adults and children. They were lively and delightful. It was lovely to see three young First Nation dancers in full feathered regalia too. The youngest must have been about four years old.

I enjoyed watching the different groups of young people watching and cheering each other’s performances. I was charmed by the little children who had to stand on a chair to reach the microphone.  They were reciting poems in Turkish.  It was sad that the audience did not give them its full attention. Adults kept talking among themselves and, of course, younger children kept playing, oblivious of the performances on stage. It was difficult to hear the performers speak, even with the microphone.

Visiting politicians and diplomats fortunately kept their speeches short.  International Children’s Day is an official holiday in Turkey. Seeing how it is celebrated in that country was interesting.