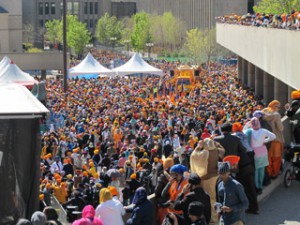 The Khalsa Day event was fantastic as usual. The Sikhs are so well organized. At the CNE, volunteers served great vegetarian food to thousands of people in an amazing assembly line. Garbage clean-up was almost instantaneous. The parade left on time. It arrived at Nathan Phillips Square 1 1/2 hours later. More food was available there: in addition to the vegetarian dishes, there were hot dogs, masala tea, and a wide variety of desserts. Another army of cheerful volunteers also served these and insisted on giving out more than anyone could possibly eat. The food was ready an hour before the parade arrived for early birds. 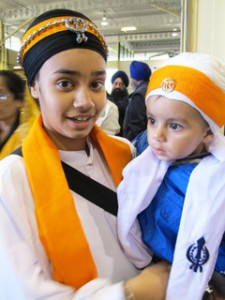 It was a feast for the eyes as well as the tummy. With the great weather, people were not hiding their brightly coloured Punjabi costumes under coats. The men wore brilliant orange or blue turbans. The women were in gold, yellow, pink, red, blue — all colours of the rainbow.

The prayers were in Punjabi, I think. But a description of Khalsa was in English. Most of the floats had signs in English. “Sikh values are Canadian values,” said one. As I stood in the crowd watching, my neighbours answered my many questions. Only one didn’t, and she couldn’t speak English, but she tried. She said she was there because it was “my religion.” 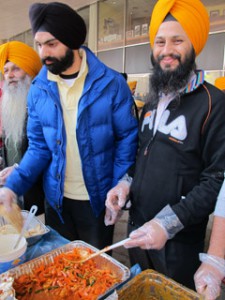 There were also signs about the 30,000 Sikhs killed in India in 1984 and one loud-speaker blaring out “Khalistan!” I suggested to the woman next to me that this movement for a Sikh state, separate from India, was now a dead issue in India. She explained that most Sikhs in Toronto still supported it, and that it was illegal in India to promote it. She said that support was open in Canada, where there is freedom.

It was a sad note to an otherwise perfect day, as thoughts of the 1985 Air India bombing filled my head. But it is obvious that non-violence has prevailed in Toronto.