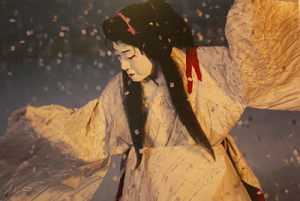 The free poster exhibit at the Japanese Foundation on Japan’s living cultural icon Tomasaburo Bando is closing next month on June 22. This ends six months of expanding exhibits and new movies every week honouring this extraordinary artist.

The final event that accompanied this show was a movie “The Painted Face” by Daniel Shmid. It showed the range of versatility of this Number One onnagata or male actor who plays female roles. 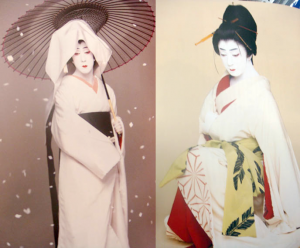 In this movie, we were able to see him relaxed while talking to his young son about a ninja game on a smart phone. We see him leaping into his early performances. From there we watch him build his reputation while gathering experience in the top Japanese Kabuki theatres. Included is some precious footage of a charming nine-year-old Tomasaburo performing in full gaudy costume. His own response to that performance  was that his Geisha life was short lived.  He has a very young face and it is hard to believe that he has many years of well-earned fame behind him while still performing internationally.

The theme in many of his performances is the fragility of woman and how they must silently suffer their fate whether it be the loss of a lover, the loss of home, or loss of life. For me, it was wonderful to see most of “Heron Maiden” for the umteenth time. The maiden, Tomasaburo, is forlorn. She dies after losing her lover to a younger woman. She turns into a Heron and makes other unsuccessful changes to win him back. She fades into the snow, her wings covering her face forever. After years of watching the theatre with many sad endings, I still find this one of the most moving performances I have ever seen.

This fragility theme is repeated also in Tomasaburo’s various roles as a Geisha.

The film also shows an odd performance set at the turn of the century where Tomasaburo plays a courtesan entertaining two poker-playing gangsters. Each is interested in her. She cannot show favouritism to either as it could be too dangerous. However in the end, the “better” one whom she truly likes, declares his interest. She agrees to run away with him. Then she realizes that she can only bring him sorrow due to her profession. While watching at the designated rendezvous spot she hides so that he leaves alone. Such is true Japanese sentiment with a new twist, that of gun-toting gangsters.

We must bid farewell to the poster show in one month but not to Tomasaburo forever. Thank goodness there are many films with this artist. They can be borrowed for free at the Japanese Foundation, 131 Bloor Street West, Suite 213. Tel. 416-966-1600.