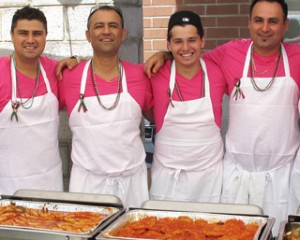 Though it was advertised to start at noon, the tiny Italian Heritage Day Street Festival in Mississauga was still setting up when I arrived at 12. This happens at many, but not all festivals. The booths are the first to be ready, but the program, the performances, don’t really start for a couple of hours.

Does the previous weekend’s huge Taste of Little Italy have a rival? In most ways, it doesn’t. In some ways, it does. The Mississauga festival was not commercial. It was friendly and relaxed, at least it was before I left after its first hour. Sorry, I couldn’t wait for the mayor and consul-general to arrive, or the music to start. 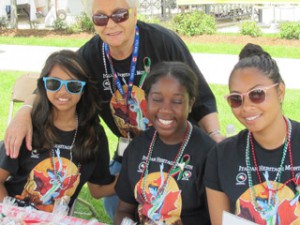 It was also set on a quiet side street, on two sides of the seniors’ housing for which it was raising money. The elderly seemed to be enjoying the change of scenery in front of their building. They didn’t have far to go. I met several women from China.

I went because I wanted to learn something about Mississauga’s Italian community. As I wandered around taking pictures, affable volunteer David Gottardo introduced himself. He told me that the Garden of Eden was actually in Italy. He urged me to try the Alioli, “the best Italian restaurant” in Mississauga. The Alioli Ristorante was the only one serving food at the fair. I learned later that it was owned by his brother-in-law. 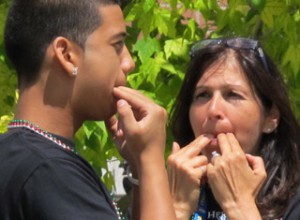 “The most sought-after cuisine in the world is Italian,” David said. He admitted that the second best food in the world was Chinese. Ha. Ha.

I tried the sausage and it was good. Veal on a bun and a multicultural “quina Meditaraneo” were offered too. “Quina” is “quinoa,” which originated in South America.

David introduced one of the organizers of the festival. Frank Trevisan, Chairman, said this festival was the first ever organized by the MICBA, the Mississauga Italian Canadian Benevolent Association. MICBA provides social services to mainly Italian immigrants. It was founded in 1986 and started out providing day care. It now has apartments for seniors over 65. It has a 160-bed nursing home, with 57-58% of its residents of Italian heritage. “We don’t exclude anyone,” he said. It is trying to building another nursing home or an Italian cultural centre.

The proceeds from the festival will go to help its seniors. Mississauga is 20% Italian. The MICBA project is Mississauga’s “Little Italy,” said Trevisan. There is no commercial area in Mississauga comparable to College Street.

An inflatable “bouncy castle” and a crafts table were keeping a handful of children busy. A table was set up with four volunteers selling cookies and Luigi’s Real Italian Ice. Only one of the volunteers was Italian. The rest had their family origins in the Caribbean and Guyana. The non-Italians came to help because a friend asked them to. It was great to see the mixture of races working together.

It was amusing watching Bruna Ronaghi, David’s sister and wife of the owner of the Alioli restaurant, trying to teach one of the volunteers how to finger whistle. It was great seeing the strong family ties behind this event.

As I left, I saw people setting up a jewellery booth. Panorama, an upscale magazine in both English and Italian, was giving out free copies and discount subscription. Its current circulation is 100,000. I wondered if this enterprise was family too.

Please tell us about your experiences at Toronto’s many ethnic festivals.  The e-mail is: ruthlormalloy@yahoo.com .