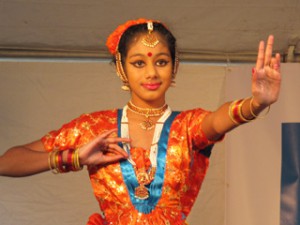 Diwali in Little India yesterday was annoying.  The performances were
supposed to start at 2pm but they didn’t get going until 2:45. In the meantime, the handful of us spectators stood there shivering in the cold.

This was the second time I’ve experienced long waits at this festival on Gerrard at Coxwell. I think I’ve attended about five events there in the last four years. This time, organizers said the delay was because a photographer was caught in traffic on the Gardiner. Fortunately Bell, the festival’s sponsor, was there with a tank of tea. Unfortunately the tea was tepid.

I had gone this time to see the Bharat Natyam dances, a classical Indian
art form I had seen in India. These dances were inspired by sculptures of apsaras or celestial beings in ancient South Indian temples – or was it vice versa?

The young dancers were from the Nupura School of Dance in Markham. They were very pretty.  Their costumes looked authentic with the pleated apron in front. They wore traditional necklaces of tiny pearls and a religious pendant. Jingling bells around the ankles were plentiful. The dancers’ movements were the same as I remembered – though the amazing sideways head movements and the big, twinkling eyes were not as pronounced. 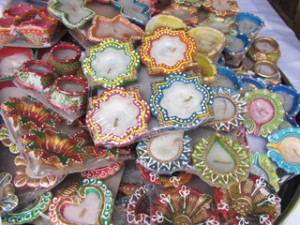 It was good to see young people interested in these classics.

It was good also to find two volunteers handing out programs. Rina and Misaki were of Japanese origin. They had never seen Indian dances before, they said.

Afterwards, I managed to find piles of traditional Diwali lamps and sweets in the grocery stores there. Diwali is the festival of lights and these candles are used to outline buildings and pathways. The sweets were about 70 cents each and as good as those in India.

Please let me know if they are on time. At least the weather should be warmer.