328. Consecration of the new Ethiopian Orthodox Cathedral, a Report 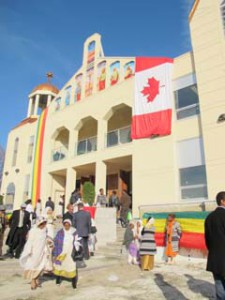 The service started at 3am. No, I didn’t go then. My dedication to Multicultural Toronto doesn’t start that early. Besides, my invitation indicated the program would be primarily liturgical then. Important as liturgy is, my sleep was more important to me. When I told church official Alemayehu Zenebe, I could only go for an hour, he suggested 12:20. That time turned out to be perfect. I stayed longer than an hour, it was so interesting.

When I arrived at the church, I found people coming and going. The building was light cream with bronze-coloured domes, a Canadian flag prominent on one side. Ethiopia’s red, yellow and green stripes were draped on the other.

I went into the building. It was so crowded I couldn’t see beyond the front door. I tried the balcony. There was a little space there, and eventually I found a chair in the back row. People were sitting on the floor too. Holding my camera up over my head, I figured I could at least get some pictures. I even stood on the chair for a better view.

Eventually, a few more people left, and I reached the front of the balcony. It was a great spot. I could see Alemu Aga, a harpist who had brought a traditional harp from Ethiopia for the occasion. He played and sang. It was a tall instrument, much like the back of a straight elegant chair. I had never seen a harp like it before. Its few strings sounded deep, low and authoritative, like a bass viol.

Alemayehu later said the design was from King David’s time. Aga was going to leave the harp in Toronto. He would spend four months teaching people here how to use it. I kept thinking of other ancient musical instruments I’ve seen in Toronto. Wouldn’t a living museum of ethnic instruments here be splendid! 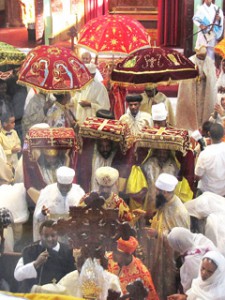 Then came the Procession of the Tabots from the Sanctuary. Bishops, priests and deacons, the choirs and the harpist marched with them outside and back again. The Tabots are replicas of the chests, the Ark of the Covenant, into which were placed the Ten Commandments of Moses. They are this church’s holiest objects. The son of King Solomon and the Queen of Sheba took the Tabots to Ethiopia. The copies are in three pieces, each covered with what looked like velvet with embroidered gold crosses on top. The procession was beautiful and full of history.

When the Tabots were returned to the Sanctuary, the service seemed to be over. But most of the women stayed. They clapped their hands and sang. They trilled, which is their way of saying “Amen.” Four drummers in silk robes danced enthusiastically. “They are praising the Ark of the Covenant,” said a woman beside me. “They are praising God, Jesus and Holy Mary.” It was great to see the intensity of their devotion. 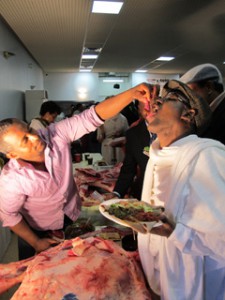 Alemayhu invited me to join hundreds of people for dinner in the hall below. Great slabs of red meat were hung beside the door. A butcher kept cutting off chunks and putting it directly into the mouths of the many people who requested it. I could not believe my eyes.

The buffet table was covered with cooked lamb, lentils, rice and injera, the flat pancake. It also offered kitfo, minced, raw beef covered with spices and melted butter. Everybody was eating the kitfo. It looked delicious. The man beside me at the table was Nino Rico, the architect of the new building. He was an Italian-Canadian. He said he liked it.

A church official at the table explained that the meat was three weeks old. In Ethiopia, they have buildings that are 50 degrees inside. The raw meat doesn’t go bad in Ethiopia’s altitude. I hope someone can tell me why it’s an Ethiopian tradition.

Of course I ate it. It was very tender and yummy. I can now add it to my list of exotic foods I’ve eaten around the world. And I’ll check to see if my favourite Ethiopian restaurant, the Lalibela in Toronto, serves it too.

For more about the Ark of the Covenant in Ethiopia, click on: http://bit.ly/2ePoN For my other Blogs about this Ethiopian church in Toronto, see http://bit.ly/RLAaLO & http://bit.ly/XnW5yx .