381. A Journey among Italian-Canadian Paintings & Artists at Columbus Centre. 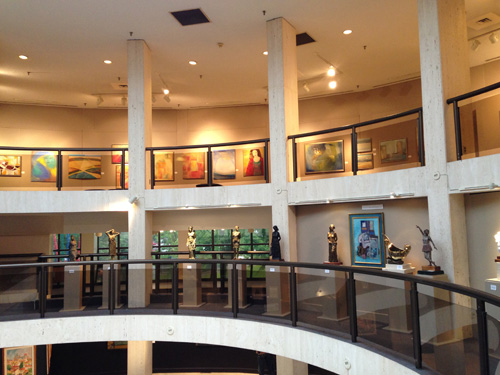 Early this month, I attended the reception of the third Viva Vitalita Art Exhibit at the Colombus Center. This was a major Italian Heritage Month event. Marcello Tarantino, one of the Directors of the National Congress of Italian-Canadians and curator of the exhibit, proudly showcased the creations of eleven prestigious Italians and Italian-Canadians artists there.

At the end of a very bright and welcoming three-storey-high gallery with a Mediterranean accent, stood a wide range of paintings, as diversified as it was surprising. It was an alternating mixture of the warmth of some Italian villages with the cold of a few amazingly empty northern Canadian landscapes. I was so intensely curious to learn about the singular universes of each of them that I talked with some of the artists. 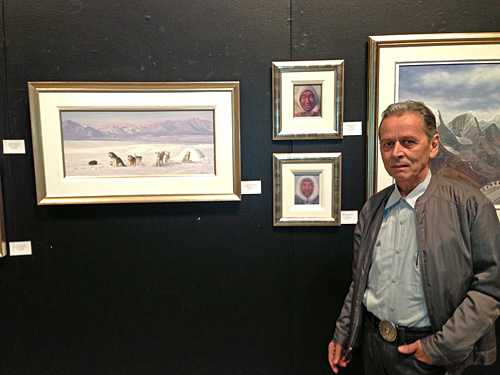 Lorenzo Fracchetti, who immigrated to Canada in 1967, explained with pride that he is one of the very rare artists to focus on the mysterious and frozen landscapes of the Arctic. The former book illustrator uses mainly oil for the majority of his realistic works that he himself describes as “Arctic Art”. This is an art form that mixes a variety of northern representations, Inuit portraits and sometimes animals, like his renowned “Snow Leopard”. Geography isn’t a limitation for Lorenzo who has travelled by dogsled as far as Baffin Bay and other northern regions to find the right spot for his inspirations. 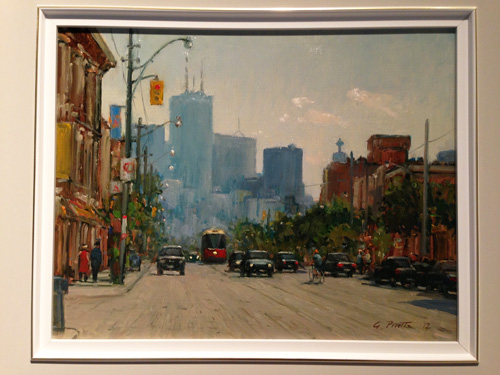 Also passionate about large spaces, even though more “urban turned”, Giuseppe Pivetta is an impressionist. Born in Villenouvelle (south of France) to Italian parents, he graduated from the Ecole des Beaux Arts in Toulouse. He immigrated to Canada in 1957 and explained to me in French, with his southern accent, that he likes to depict the famous busy avenues of Toronto. His paintings include Queen Street with traffic lights, cars and streetcars. He also likes to work on relaxing countryside scenes with broad and quiet fields and farmers plowing the land. His range of subjects were a pleasant contrast, his paintings always full of diversified colours. 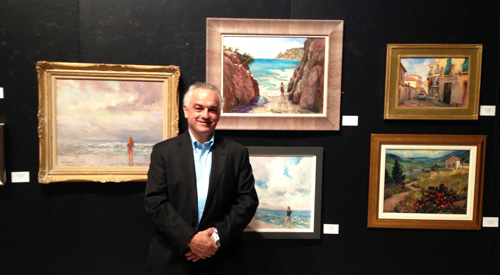 What I personally appreciate while listening to an artist speaking about his art is understanding what is running in his mind at the very moment of the creation. This is especially true when the work is the object of strong memories. “Plums of Father’s Tree” is certainly the painting Sam Paonessa talks most about. I can feel a little bit of emotion while listening to him explain that the painting represents the fruits from his father’s tree in Niagara Falls where he grew up. Another way he generates spectator interest is playing with the effects of depth. Therefore, the illustrator for Hallmark Canada also succeeded in attracting me to his universe with his creation of a woman facing the sea between two huge rocks. It was like an invitation to jump in the water and swim with her. 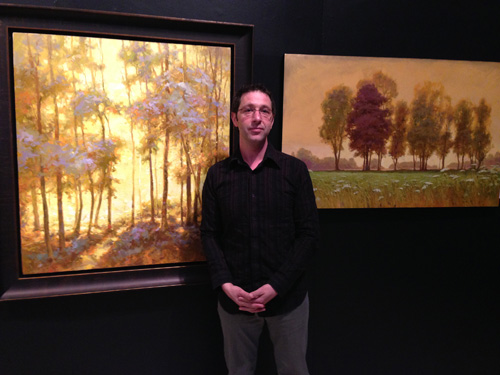 Tony Bianco is renowned for his series of pieces depicting Canada’s national parks. He was chosen by the Royal Canadian Mint to design the millennium two-dollar coin. It was with an agreeable simplicity that he answered my questions. Using a lot of gold effects in all of his “poetic realistic” works, he says he tries to always convert the common to the miraculous. He thus seeks the creation of illusion and generates a connection between the observer and a more spiritual universe. Indeed, his paintings on canvas are certainly the brightest of the gallery. His “Morning Café” invited me to have a chair and relax in a very sunny Italian alley, which exudes the Mediterranean flair. No doubt, as a European, I felt as if I were home. 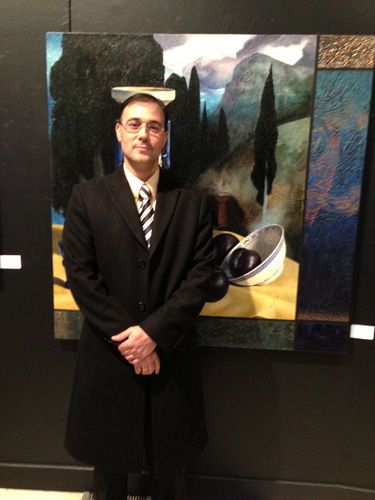 It was certainly with Bruno Capolongo that I spent the most time. As the youngest artist of the exhibit, this very talkative Italian-Canadian did not disguise his excitement at being among all of these very renown artists. In my opinion, his was a totally deserved place because of the quality of his encaustic paintings (which are made with wax). Balancing contemporary and traditional influences from Western European art, Bruno likes to gather elements from different times and places in his works. With a passionate interest, he described his last “even-if-not-completely-finished-painting” (between you and me, I absolutely did not notice that it was not complete): a statue of Pandora (that originally stands in the Art Gallery of Ontario). It was associated with some grass from a picture he previously took and a bridge of his imagination. It was all in what looked like a bright and slightly foggy Garden of Eden. Therefore, the three-time winner of the internationally coveted Greenshields Prize always tends to combine the cultural wealth of our pasts generations with the present moment. He recalled with a smile what sounds to me like his main motto: “As you move forward, you have to look back”.

My thanks a lot to all of the artists for your time, and to Marcello Tarantino for his warm welcome.

This exhibition continues to July 8. There is still time to enjoy this show. Columbus Centre is at 901 Lawrence Ave. W. in Toronto.