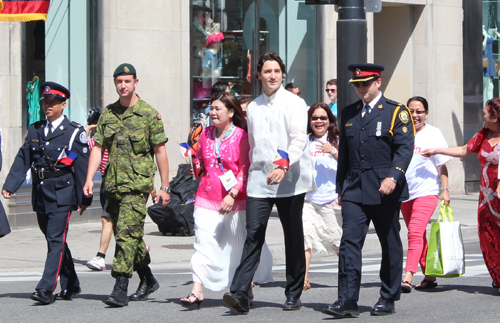 With three parades slated last Saturday for Yonge Street each starting nearby at 11am, I wondered what would happen if they collided. I was waiting near Yonge-Dundas Square. Filipinos Making Waves was the first there, right on time and very short. In the front behind the flag bearers was Justin Trudeau in a white barong tagalog. After he was introduced by the Filipina m.c.– as only a charming Filipina can and get away with — as something like “so cute” and future prime minister, Trudeau gave a speech in Tagalog to cheers. I wasn’t close enough to see if he was blushing. Stephen Harper be warned.

With perfect timing at the end of the Trudeau speech came the Orange Parade from Queen’s Park. The Filipinos’ group was beside or on the stage. There was no conflict except for the sounds of bagpipes and romantic Filipino songs. The Orange parade is a celebration inspired by the victory of Prince William of Orange in the Battle of the Boyne in 1690 in Ireland. From its website: “The Loyal Orange Association in Canada is a Fraternal group that provides a democratic forum of action for like-minded Protestant men and women who, concerned about their Faith and Heritage, wish to preserve, maintain, and promote this great institution and principles of democracy upon which all Canadians may enjoy equal rights under the law.”

Many of Toronto’s early mayors were members. I liked the “all Canadians” part. (http://www.orange.ca/) 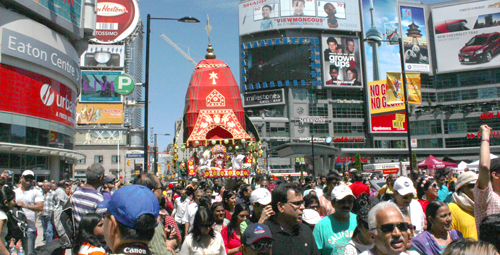 The Ratha-Yatra or Festival of India parade  was supposed to start from Bloor and Yonge at 11am. It didn’t arrive at the square until after 12pm. I was about to give up when I saw the flashing lights of a police car in the distance. Humans were pulling the three chariots. Perhaps that and frequent stops were the reasons it was late. I had time to discover that the huge chariots weren’t solid. Their towers could collapse so they could go under low-lying wires. They were cool. Participants were dancing and strolling. They chanted “Hari Krishna” as they proceeded slowly to the ferry and onward to Centre Island.

Within the space of 90 minutes, Toronto smoothly managed three parades, innumerable sightseeing buses, long lines of traffic, road construction, and thousands of pedestrians around Yonge-Dundas Square. Batman was there too, but he wasn’t needed. 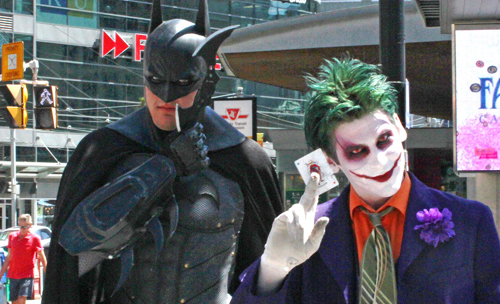