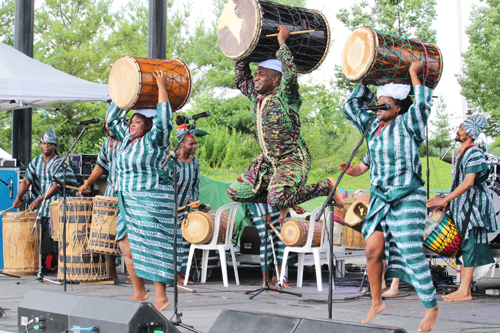 Except for one minute, I thoroughly enjoyed myself at AfroFest earlier this month. I spent two hours there feeling the drum beats and rhythms of four sets of performers. Their music was inspired by cultures in Brazil, Burkina Faso, Nigeria and other parts of Africa. I loved their energy and enthusiasm; not a dull moment here. Three people danced and leapt while beating huge drums balanced on their heads. Sani Abu in the centre has been a dancer and teacher of music in Canada since 2004, but I had never seen anything like this before.

Mabinty Sylla bounced around vigorously non-stop for at least half an hour. When she went into the most energetic part of her act, she must have used up 500 calories a minute. I was exhausted just watching her. 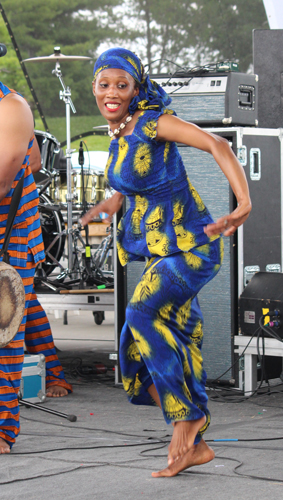 I had spent a week in Botswana’s Okavango delta, so I was especially interested in a newly formed group named Okavango African Orchestra. The members were from Eritrea, Senegal, Madagascar, Somalia, Zimbabwe, Ghana and Burundi. It was named Okavango because that’s where many different kinds of animals gathered every year. The music was slower, hypnotic. I was fascinated by their instruments.

The kora was huge, stringed and guitar-like with a long neck and big bowl. This one was from Senegal. 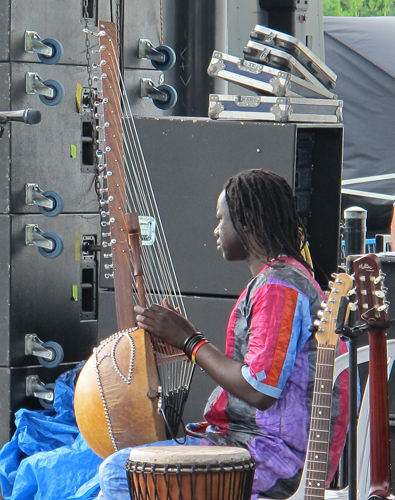 Composer and singer Daniel Nebiat was playing a smaller version of a familiar-looking harp. He called it a krar and he was from Eritrea. I had seen a bigger version called King David’s harp at the consecration of the Ethiopian Orthodox Church’s new cathedral last year. Nebiat’s had an amplifier attached which was much more modern. 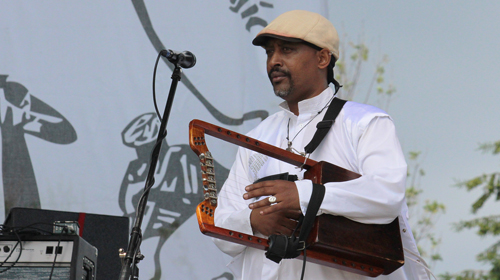 The crowd grew thicker as the afternoon progressed and they too responded enthusiastically to the music and the beat. Chairs and refreshments were available nearby but standing meant being able to dance with other people to the music. I heard later that many kept dancing in the rain.

The schedule showed over 40 different performances in two days. I only had time for four sets. I wondered where all these talented musicians and drummers came from. Amadou Kienou said he was a full-time musician, based like most of the others, in Toronto. He taught drumming and West African music. The people in his band were his students. 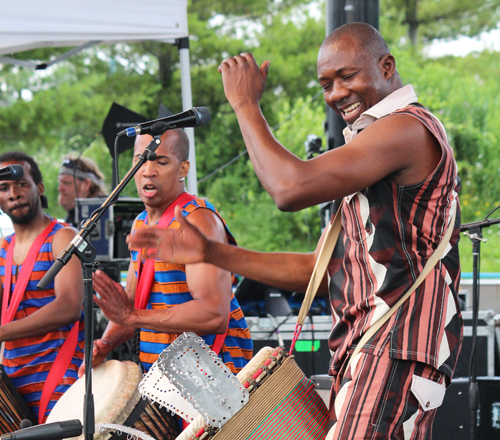 The Ijo Vudu Dance International has a program that combines “traditional African rhythms and movement, with healing techniques such as breathing, stretching and active visualization”. I should have asked if theirs was the voo doo we hear so much about.  Its web-site is at: http://www.ijovududance.com/home.html. 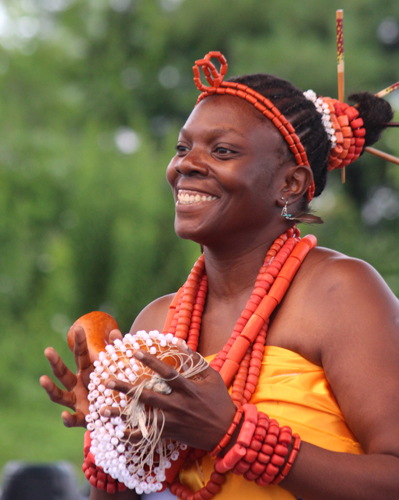 In between sets, I wandered among the vendor stalls. I found a rhinoceros mask from Zambia. It looked genuine. It was used by dancers and it was for sale and tempting. 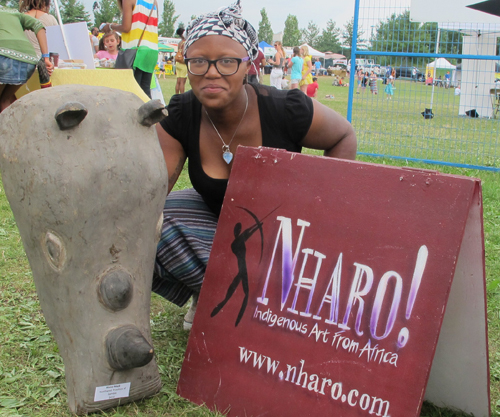 I snapped a picture of a vendor in a beautiful yellow dress and turban. She said she didn’t want her picture taken and insisted on deleting it because I had not asked permission first. I was over 10, yes 10 meters away when I took it. At one point, she seized my camera. I usually ask permission when taking close-ups and felt invisible from that distance. But she was right. I should have been more respectful. I wondered how she policed all the other people taking pictures of her at AfroFest. Do you think photographers should always ask permission for taking pictures like all the ones here?

In spite of it, I was glad that AfroFest had brought the musicians and vendors together in one place, and for free, so we could enjoy and get to know them. AfroFest has been going on since 1989, run by a group of volunteers under the banner Music Africa. It was good to hear that its president, Michael Stohr and Nadine McNulty broadcast regular programs of African music on CUIT-fm 89.5, Nadine McNulty also runs the Batuki Music Society to find jobs for African immigrant musicians and help develop their careers. More power to them and to others like them!