Some people think that Robbie Burns’ birthday celebrations are boring. “They go on forever,” said one lass. I went to two last weekend and enjoyed both of them. It was especially fun when we were told that the haggis ceremony was actually a joke started in India.

The events at Mackenzie House and Metropolitan United Church were almost free. They were two different styles but I can’t recommend one over the other – they were both good. I did prefer Mackenzie House’s haggis over the Met’s. It was spicier, and more flavourable. But then, you might like your haggis bland.

The birthday party at the Metropolitan United Church was more formal. We were seated at tables covered with white linen table cloths. We toasted the Scottish bard with tea in fine bone china. We feasted on soup, salad, haggis, and cookies. A basket was available for donations.  The people at my table were pleasant, but they didn’t offer much conversation. 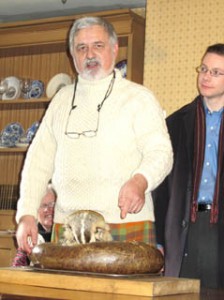 At Mackenzie House, it was standing room for many of us. The entrance fee covered mulled cider and cookies as well as the haggis, but the cookies were shortbread, a traditional and rich Scottish treat. Guides were easily available to answer questions.

In both places, someone gave a talk about the 18th century poet, “one of the 99%,” said the speaker at Metropolitan United. Burns represented the common man. He is considered a national hero, the rallying point of Scots nationalism. His song “Scots Wha Hae” was once considered the national anthem.

His birthday is celebrated in more places around the world than that of anyone else except Jesus Christ, one speaker said.

Haggis was a peasant dish. It included whatever was available such as the innards of sheep, onions, and oatmeal. Then this mixture was stuffed into a sheep’s stomach and cooked. Bag pipers preceded the haggis as kilted men carried it ceremoniously from the kitchen to the diners. One of the men then “addressed” the haggis, reciting Burns’ poem,  which begins:

Fair full your honest, jolly face,
Great chieftain of the sausage race!
Above them all you take your place,
Stomach, tripe, or intestines:
Well are you worthy of a grace
As long as my arm… 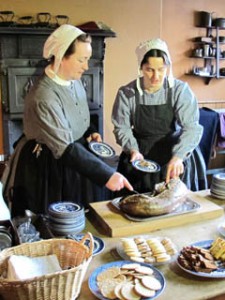 We were told that the ceremony started when Scottish regiments in India wanted something to impress visiting military dignitaries. Creative lads developed the dramatic performance with its shouts and many flourishes of hands. Has anyone else heard this story?

Some of my Scots friends won’t eat haggis even though it is the national dish of Scotland. They don’t like it. But if these two events are on next year and you want to give haggis a try, you can go to both. The church and Mackenzie house are only within a few meters of each other.