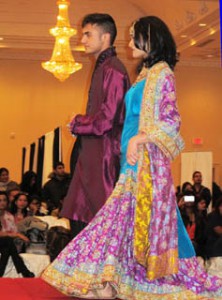 I went to the Dreams Wedding Show last Sunday. This South Asian event seemed smaller than the year before, and yikes!, the fashion show was over an hour late starting!

It wasn’t a complete waste of time, though. While I sat in the front row, saving a good seat for taking pictures, a friendly Bangladeshi-Canadian woman sat beside me. She told me about two other South Asian bridal shows she had found on the Web. She said the Suhaag show was the biggest and it’s on February 5. The Kismet Wedding Show is coming up February 12. 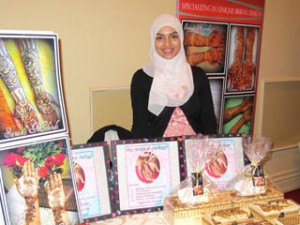 I’ll try to go to both so I can compare all three. Hope you can go too, if you are interested in South Asia.  The dresses are so beautiful. The styles change almost daily.  Details of the shows are on or will be on www.TorontoMulticulturalCalendar.com.

Urmee, who sat beside me, was at the show because one of her daughters was getting married. It was a mixed marriage and she would have preferred that her daughter marry a Bangladeshi, but what can you do? The young man was of Irish origin.

The couple met when her daughter was in school in Newfoundland. According to Bangladeshi custom, Urmee is giving her daughter a dowry in cash. She is also giving clothes to her daughter and to her new son-in-law. Though her Canadian-born daughter hasn’t said anything about these home-country customs, “I don’t want to make her unhappy… She’s not marrying in my way. I’m really confused as to what to do,” she said. 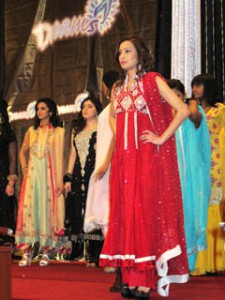 Urmee wants to do what she was brought up to do. Her own marriage had been arranged by her grandmother who had raised her after the death of her parents. She didn’t see her husband until the day of her wedding. But she has lived in Canada for twenty years now and her daughters were born in Canada. She feels settled here in Canada, but her daughter hasn’t discussed wedding plans with her yet.

The confusion has started her thinking about returning to Bangladesh to retire. I got the impression she’s not sure if she can get emotional support from her daughters in her old age. They will have their own families to take care of, she said.  It was interesting to meet Urmee and to hear about her problem.

As soon as the fashion show finally started, dozens of cameras appeared. The dresses with lots of dazzling sparkles and graceful, floating fabrics bounced by. The models were beautiful. 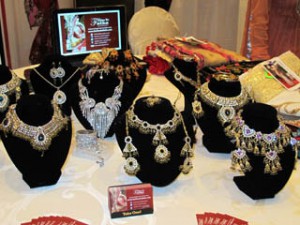 After the show, I surveyed the vendors. They had excellent quality clothes and jewellery on sale. At one booth, a woman named Sanaa displayed her own intricate henna designs. A jeweller let me take pictures of his elegant necklaces. “I hope you are not sending these pictures to China so they can make copies of my designs,” he said, almost joking.

Altogether, it was a lovely show in spite of the delay, though the venue could have been better. The faucets in the washroom were broken and the promised food was also late in arriving. The $5 fee came with a coupon for food, a spicy mac and cheese. If you paid more, you could get lasanya, or meat and rice. But what can you do?