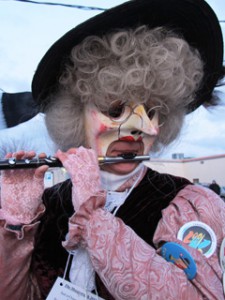 Sorry about that. I had suggested getting up before dawn to see the Swiss Morgestraich parade on Saturday morning. The Canadysli Guggemusig Band started out right on time at 7am, but it also went around the block a second time at 9am. The band also had two shows inside the Musket Restaurant at 8 and 10am. You could have slept in a couple hours later and seen it too. I should have read our last year’s post about it. 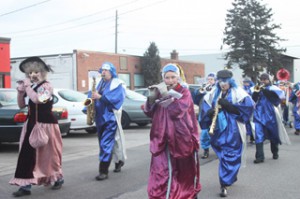 I arrived at this, one of my favourite and highly recommended festivals, just before 7. It was wonderful as usual, a lot of fun, especially if you asked questions about the band and Swiss customs.

As in previous years, band members enthusiastically played the likes of “The Saints Go Marching In” and the “Can Can Song.” I kept wondering what passing motorists thought of this strange apparition, this band dressed mainly in blue and silver robes. Its musicians were wearing masks, and long silver or blue paper hair. One of them was playing a washboard, and another a cow bell. The music was all off-key. 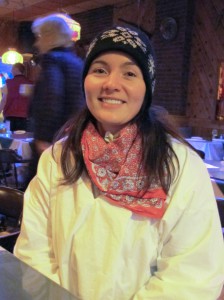 Afterwards, in the warmth of the restaurant, I found myself beside Maureen Kohler. I was wondering if the band played any traditional Swiss songs.

“Those are the type of songs played at the Morgestraich festival in Basel,” said Maureen, who was born in nearby Sololthurn and came to Canada when she was 14. “They are also supposed to be a little bit off. They can’t be perfect.”

Maureen had left Barrie for the drive to Toronto at 5am that morning, through a snow storm. This was her third year. She was wearing a nightshirt, typical of a festival in her Swiss home town. “It’s to scare away the winter,” she said. A waitress was serving flour soup. Maureen’s mother used to make it. It is served along with beer at the festival. 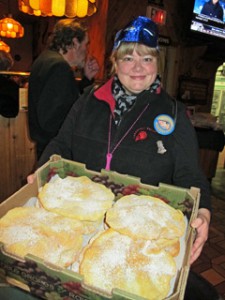 “You bake the flour in a pan until it’s brown, and then add water,” she explained. I found it too salty.

Volunteers sold traditional Swiss carnival treats. “Knee pancakes” are so named because the cook stretches them on her knee. They reminded me of the equally-crispy pastries my Tibetan friends served earlier in the week for Tibetan New Year. Those were also made of flour and butter and fried in oil. The Swiss variety was sweetened with sugar, the Tibetan with honey.  They were the basically the same high-calorie confection. The similarity was amazing.

Most of the band members were Swiss. Allan, however, was of Trinidadian origin. He has never been to Switzerland. He joined the band because his best friend from school was in it. “It was an excuse to make a lot of noise and play music,” he said.

Katherine was the only person wearing a paper mache mask. She was from Basel and had two of them in Toronto. She said masks like hers are worn by everyone in the Basel parade. Her mask wasn’t anyone in particular, just an “old woman,” she said. Like many of the band members, she seemed too embarrassed to give her last name.

It was great to see several non-Swiss people there. A woman from the Philippines was present because of her Swiss husband. It was her first parade. “In the Philippines, parades are different,” she said. “They are religious.”

Band leader Philippe Moser was of Swiss origin. He started by playing clarinet and sax in the bard. Now he conducts it. The band begins practising once a week each year, in October.

I’ll be back next year, if I possibly can. It left me with such a happy feeling; a nice start to the weekend. I hope you can make it next year too.

For our previous blog about this festival, please click on: http://bit.ly/AwBv15 .