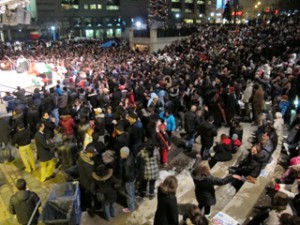 Nowruz, the Iranian New Year and the beginning of spring in Toronto is March 20 at 1:15 am. The celebrations start, however, on March 13 with the Iranian Fire Festival (Chahārshanbe-Suri) at Mel Lastman Square. There’s also a bon-fire with fire-jumping at the Richmond Green Sports Centre and Park in Richmond Hill. All Torontonians are welcome to these free events. You don’t have to have an Iranian connection.

Last year I was at the celebration at Mel Lastman Square. I complained about the lack of English spoken from the stage. This year, said organizer Muhammad, there will be English and events for kids, like face painting, as well as music, dancing and fireworks.

Toronto allows no bon fires. Celebrants in Richmond Hill, which does allow bon fires, will leap over the flames shouting “Sorkhi-ye to az man, Zardi-ye man az to.” These roughly translate as “Give me your beautiful red colour.” It is a wish that the fire will take away one’s paleness, illness and problems, and give us warmth, energy and happiness.

Some people jump the fire just for fun, I was told. For some in the old days, it was like Halloween. Children used to go from door to door, banging spoons against metal bowls and asking for treats or money. The noise was to scare away the bad luck of the last Wednesday of the year. It was a time for visits by ancestral spirits.

The festival was banned in 2010 by Iran’s Supreme Leader for being “corrupt and counter to Islam.” For some, it has become a symbol of protest against the Iranian government.

Chaharshanbe-Suri in Toronto is a festival for all Iranians, no matter what their religion. Special good-luck foods include noodle soup and a mixture of seven dried fruits and nuts.

For addresses, times, and information on these and other ethnic events, see March 13 on www.torontomulticulturalcalendar.com .

For other events in our Iranian community, click on: [http://events.kodoom.com/en/persian/toronto-canada/.