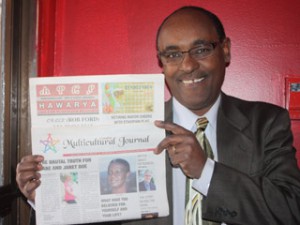 March was Ethiopian Heritage Month. Mayor Ford proclaimed it so. But where and when were the events?

As the month progressed, I started asking questions. I found an exhibition of books in one library, but no one seemed to know about anything else, not even Toronto’s Protocol Office. I left messages at the Ethiopian Association, but no one returned my calls. The Ethiopian church had never heard of the proclamation. Finally, as the end of March approached, I contacted an Ethiopian newspaper.

Muluken Muchie from Hawarya Publications sent me an invitation to the Ethiopian Association’s celebration on March 29 at 4pm at a nightclub on the Danforth. I was so excited, I got there on time. I should have known better. It was African time. Volunteers were still setting up an exhibit of Ethiopian artifacts when I arrived. I was the only guest to be there on time. This was no surprise. Africa is not noted for its punctuality. It is one of its charms. 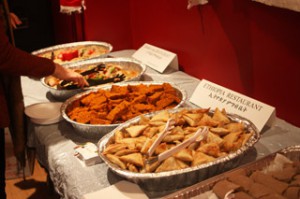 But the organizers, the Ethiopian Association did have a printed program with times and a program schedule. Performances would start at 5:20, it read, and they did.

The time was not wasted. I had a talk with Muluken Muchie, owner and editor of two newspapers. Hawarya is largely in Amharic (Ethiopia’s official language) with a bit of English. He started it in 1995. The name means Apostle, because he wanted its influence to reach out to others. The print run is 5000. 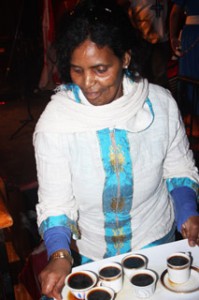 He has an on-line edition in English at: http://www.hawarya.net/index.php . It’s up-to-date so if you want to see it, you can. He has readers all over the world because there is no other media reaching the Ethiopian diaspora, he says. He covers news of Toronto, Germany, elsewhere, and news from “home.”

His other venture is the English-language Canadian Multicultural Journal. It has a multicultural board of volunteers of Indian, Caribbean, Israeli, and African origin. They started in 2011 with articles on self-help, bullying, the ethnic vote, and tips on traveling.

Muluken arrived in Canada in 1986, a period of famine and political turmoil in Ethiopia.

I also talked with Teshome Woldeamanuel, Managing Director and Publisher of the English-language International Ethiopian Newspaper. His tabloid has a print run of “up to 10,000” and it also is mainly in Amharic with some English. I found his many advertisements helpful. Most of his readers are on line, he said. The web-site is: www.tzta.ca. 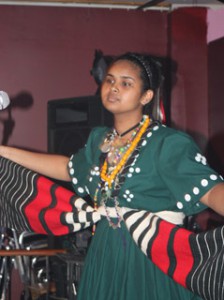 Like many ethnic newspapers, these tabloids are distributed in relevant ethnic grocery stores, restaurants, bars, churches, mosques, and offices. If I had seen the International Ethiopian Newspaper, I would have learned about the City Hall Reception on March 2.

The exhibits included some elaborate crosses, for which Ethiopia is famous, wood carvings, baskets, and embroidery.

The hall was filled with the lovely scent of frankincense as a woman prepared and passed around cups of the famous Ethiopian coffee. The performances started with the Sebseb Belu Ethiopian Dance Group. The vibrating shoulders and head movements of the two female and one male dancer were amazing. Dr. Eric Hoskins, Minister of Children and Youth Services spoke of his own work in the Sudan with Ethiopians.

People were wandering in throughout the afternoon. By dinner time, there were about 60 of us. The food was from the Rendezvous, Ethiopia and Lalabela Restaurants. It was pastries, and rolls of injera with spicy fillings, as usual, very wonderful. The atmosphere was intimate. There was time to learn about the art.

The Ethiopian Association is run entirely by volunteers. It was a pity that only three of us non-Ethiopians were there to enjoy the event and the friendly Ethiopians.