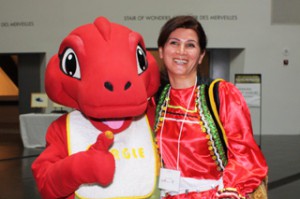 I was at the Royal Ontario Museum’s Iranian Heritage Day on Saturday. It was wonderful. I stayed there from 11am to 5. Okay, I must admit I’m very fond of Middle Eastern music. The event was also well organized. It had a printed program which showed pictures and bios of the performers. The announcements were primarily in English. I felt welcomed.

The M.C. was the very witty Jian Ghomeshi of Iranian descent. Ghomeshi is the host of Q, the popular CBC Radio show. I had never heard of him before, but now I’m a fan. 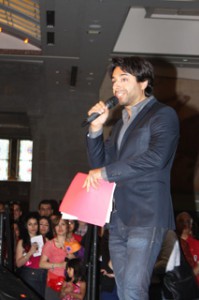 I didn’t like the acoustics at the ROM’s main stage in the Currelly Gallery. I stood for two hours because we had arrived late and all the seats were taken. I went off for lunch while the show continued for a third hour.

The acoustics downstairs in the Eaton Theatre were better. There, a few of us heard Dr. Ed Keall’s informative talk on one of the ROM’s excavations. It was of a Persian warlord’s fortress on the Iraq-Iranian border. There was also a film in Farsee about the reconstruction of a large mosaic by ROM curator Mary Faghani. At the end, the audience gave Faghani a standing ovation. 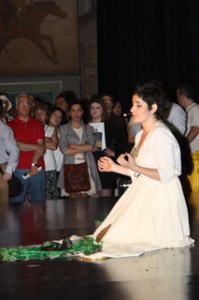 In this theatre, many of the dances and the charming puppet show were repeated. I had a soft front-row seat. The audience also gave its second well-deserved standing ovation to dancer Sashar Zarif. His performance was so powerful that I stopped taking pictures and watched in awe. His whirling continued for so long, he really gave the impression he was in touch with God.

Please remember his name and look for it so you won’t miss future performances. People sitting beside me said Zarif lives in Mississauga and teaches at York. He is a real asset to the Toronto’s art scene and should be encouraged. See him on the web at: http://bit.ly/KpyPru and http://bit.ly/LBOeoW .