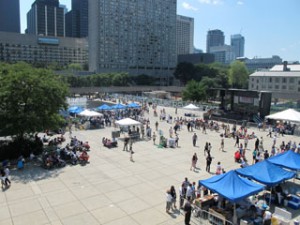 The following events are free except where indicated. Where food is available, you might have to pay extra for it.

We’re starting our week on Wednesday, July 25 with the launch of the Creole Festival Kompa Zouk at the Westin Hotel at Harbour Square. A related exhibition by the Haitian-born artist Gabriel Osson is at the Gallerie Celine Allard on Lower Spadina Avenue.

On Thursday, the inter-cultural music of Jaffa Road will be performing from noon to 2pm at Nathan Phillips Square. That evening free films will be screened. Chaos-World, a theatrical medley on Haiti will be at the National Film Board, and a new documentary on Myanmar will be at the East Gallery, near the AGO. 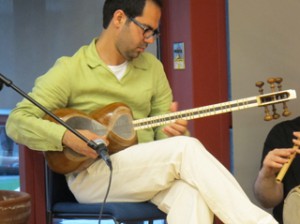 On Friday, the Beaches International Jazz Festival will start its second three-day weekend run. Expect huge crowds to its several venues in the Beach and Woodbine Park. Music-lovers can also aim for the less-crowded Classical Music Festival at Harbourfront which seems to be concentrating on strings from Mali, Africa and the Middle East.

Saturday morning will have the Tamil Chariot Festival at the Sri Varasiththi Vinaayagar Hindu Temple in Scarborough. I highly recommend this for students of comparative religions. I haven’t found anyone else who wants to go with me. Painful self-flagellation is part of these age-old Sri Lankan rituals. So is an Indian vegetarian lunch. 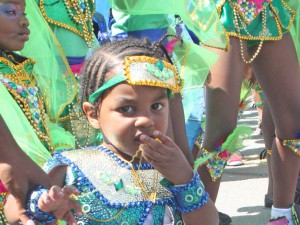 The ROM opens a unique display of the history and cultural significance of the Caribbean carnivals in Toronto. It’s free but you have to pay the museum admission of $15 for adults unless you have a free pass. See: www.http://bit.ly/SSpwmg.

The Jazz Festival at the Beach and the Classical Music Festival at Harbourfront will continue. Then there’s the Jewish Shul of Rock in Earl Bales Park near Bathurst and Sheppard.

On Sunday, the ROM will have Caribbean Carnival mask making, story-telling and steel drumming. Another Tamil Hindu Chariot Festival will take place at the Sri Ayyappan Temple at Middlefield and Finch. The Beaches International Jazz Festival continues and I’m aiming for the now famous Lemon Bucket Orkestra that’s playing around noon. 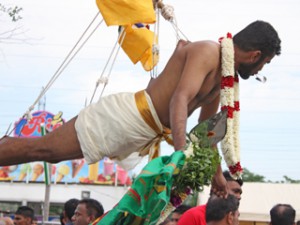 Kensington Market is probably the most multicultural market in Toronto. It will become a pedestrian area and bring on a maypole, street food, and cultural performances for the occasion.

The National Film Board will have a live story teller from Guadeloupe and the Spanish Festival de Verano will be in Downsview Park.

T.O. Foodfest, a gourmet sampling opportunity with food from Taiwan, India, the Philippines, etc. will be at the Chinese-Canadian Community Centre at Sheppard East and Progress.

English Country Dancing continues in High Park with a suggested minimum donation of $5.

Please check our web-site: www.torontomulticulturalcalendar.com for details, and in some cases, performance schedules and bios. Click on “Upcoming” for a printable version. And don’t forget to send us your impression of the performances, and notices of festivals we’ve missed. An example of such a report is on: http://bit.ly/LGmQa2 . Our e-mail is: ruthlormalloy@gmail.com .