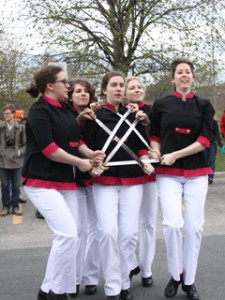 This weekend’s free or nearly-free multicultural events start to heat up on Thursday evening with the beginning of the four-day annual South Asian Heritage Festival in Mississauga. You pay for food and kids’ rides. Poetry, films, music, and fashion shows will be free. This carnival erupts at the end of the austere Muslim month of Ramadan.

Planet IndigenUS will continue until Sunday at Harbourfront and other locations. Last weekend, the quality of some of the events was so high, I was sorry so few people were there to enjoy them. Okay, so it was raining – but events at Harbourfront are under shelter and rarely weather-cancelled. You missed a great performance by Inner Mongolia’s lively band, Hanggai. It got a standing ovation. 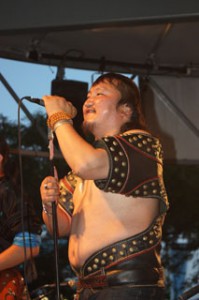 The Australian Aboriginal song and dance duo also there were especially fascinating last weekend. Toronto doesn’t have much opportunity to get a glimpse of this culture. They played a didgeridoo, a difficult-to-master wind instrument developed by their ancestors, around 1,500 years ago. A dancer became a bird and then a kangeroo. Goombine (Richard Moore) said the striped and circular patterns on his white-coloured body were in honour of his ancestors.

Also last weekend at Harbourfront, Hoop dancer Dallas Arcand from the Cree Nation in Alberta showed why he won this year’s World Hoop Dancing Championship. He was amazing. So you can expect some great acts this weekend.

The Museum of Inuit Art will keep up its free daily guided tours twice a day. It’s at Queen’s Quay Terminal, Harbourfront. In the evening, Planet IndigenUS will press on with its free screening and discussion of the CBC TV’s 8th FIRE series. All films, which are about Canada’s indigenous peoples, are shown at Fort York. 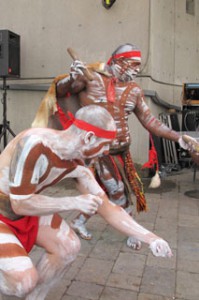 On Friday, Northwest coast natives will be performing at Harbourfront. Look also for the Sami reindeer people from Norway. These and other interesting-sounding acts, are part of Planet IndigenUS. The Museum of Inuit Art continues its free tours. Indonesians celebrate their Independence Day. The South Asian Heritage Festival will go on in Mississauga.

On Saturday, Planet IndigenUS will keep going at Harbourfront with a demonstration of Aboriginal culinary concepts, lively Metis fiddling, and a Taiwanese indigenous dance company. The Museum of Inuit Art will offer its free guided tours and Filipinos will be Making Waves with an 11am parade and music in Yonge-Dundas Square.

The All TV Korean Culture Caravan will be in Mel Lastman Square with traditional & modern Korean music and dance. The Gerrard Little India and Mississauga’s South Asian Heritage Festivals will both be celebrating the end of Ramadan. 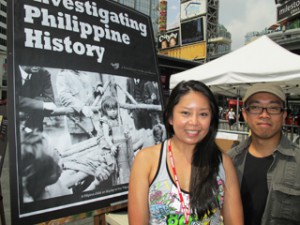 On Sunday, the CNE’s International Stage opens with the Yate Dance & Acrobatic Team (Shenzhen. China), La Tuna Lazos de Amistad (Colombia), Dancers of Damelahamid (British Columbia) and The Kozaks (Ukraine). The Kozaks performed in 2011 and are worth seeing again.

Eid Al Fitr Prayers and Carnival will be at the Olive Grove School in Mississauga with games and sports, with food for sale.

Planet Indigenus at Harbourfront Centre will offer a one-man band from Australia, and native dancer Eddy Robinson who was a hit at Fort York. Planet IndigenUS will have its closing ceremonies at 5pm at Harbourfront. Lisa Odjig, the only woman to win the World Hoop Dancing title, Taiwan’s Tjimur Dance Theatre, and the Morningside River dance group will be there.

The Museum of Inuit Art will only offer a free guided tour in the morning. English Country Dancing will take place in High Park. The South Asian Heritage Festival will have its last day.

Please check our web-site: www.torontomulticulturalcalendar.com for details, and in some cases, performance schedules and bios. Click on “Upcoming” for a printable version. And don’t forget to send us your impression of the performances, and notices of festivals we’ve missed. Our e-mail is: ruthlormalloy@gmail.com.