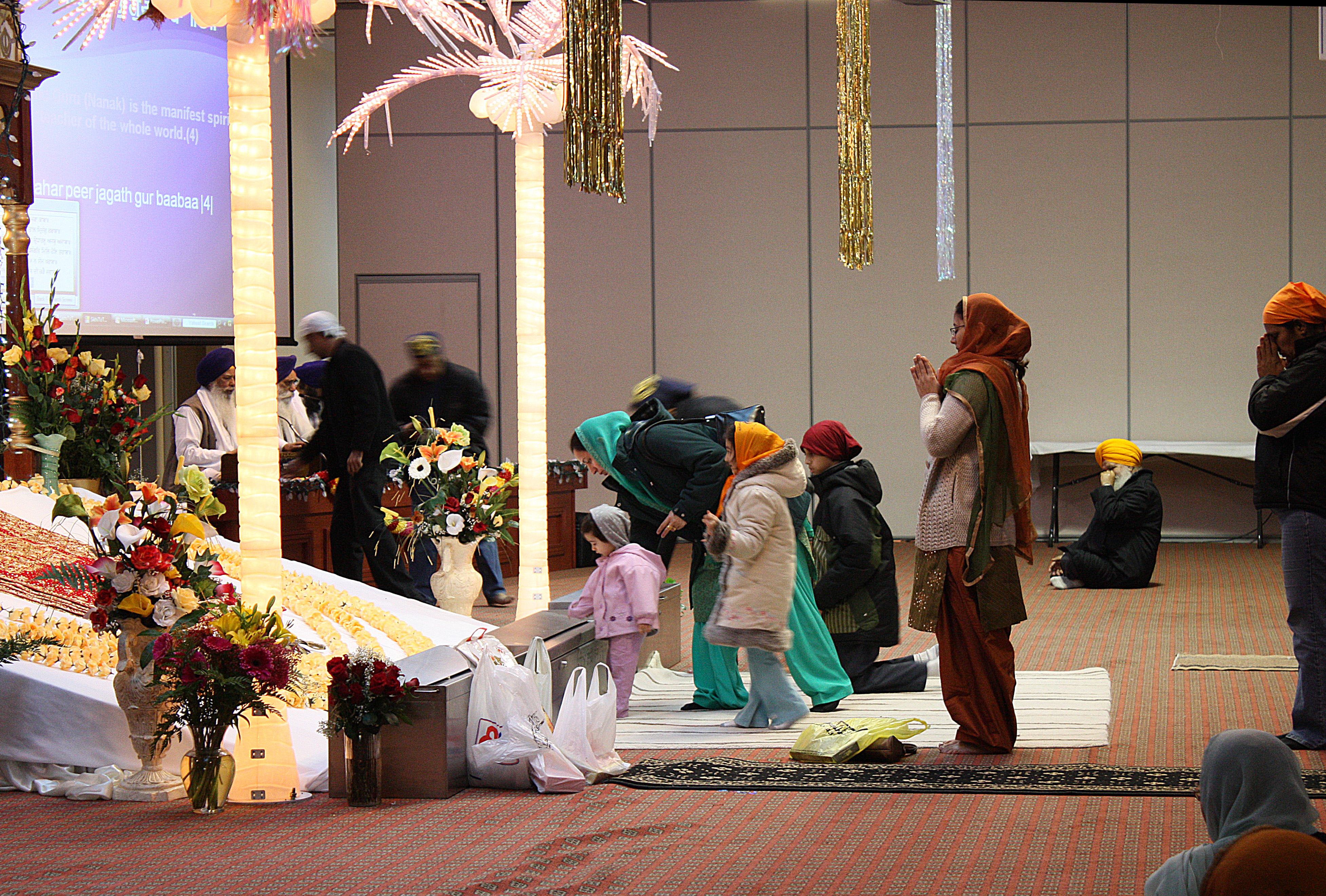 I lived for four years in India and loved it. I visited Sikh temples there and knew about Sikh hospitality.  My visits were usually without a guide and on my own.  Sikh friends explained some of the customs.  Most Sikhs are named Singh which means lion. I can even greet Sikhs by saying “Sat Sri Akaal” without thinking twice about it.

Some back-packing American friends in India had slept overnight in Sikh temples and raved about the hospitality. I knew that Guru Nanak was the founder of the religion and its most revered teacher. On his birthday, a date I found on the web, I visited the Ontario Khalsa Darbar near highway 401 and Dixie.  One of my Indian-Canadian friends said it was the largest Sikh temple in Toronto.  I covered my head with a scarf in respect.  As in India, I went alone.  No one else wanted to go with me.

“We are expecting 50,000 people,” said the turbaned greeter at the door of the tent, pitched outside the huge building. “You can leave your shoes here.”  He was friendly and said I could take pictures inside. Then he handed over a ticket. No one in India had ever given me a receipt for shoes left outside a temple door. He pointed upstairs to a humongous room, bigger than a high school gym. A case displaying swords was at one end and a fancy altar with two lighted “palm trees” stood at the other.  A man, probably a priest, sat in the tent and waved what looked like a white horse tail. Three bearded musicians sat playing hymns on harmoniums and drums.  Women in salvar kameez, tunics and baggy trousers ringed the edges of the room or stood patiently with the men in front of the altar.

The scene was amazing. I had walked through a wardrobe and I was back in India. 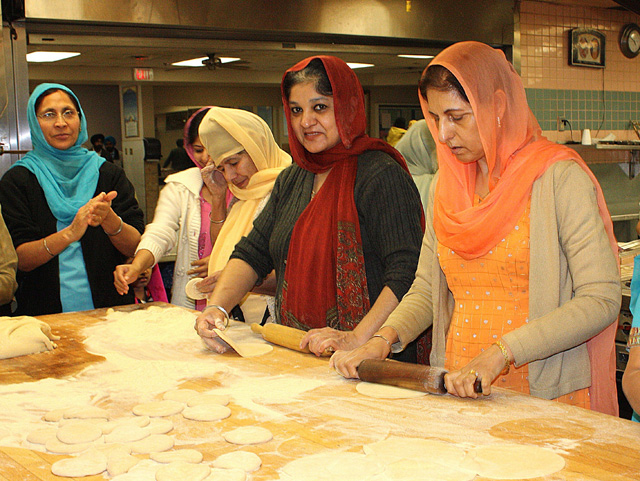 A constant stream of worshippers approached the altar. They bowed, head to the ground,  prayed, and left gifts of money and food. No one seemed to notice my picture-taking.  It was like that in India too. As I went to retrieve my shoes, one of the men at the door asked if I had eaten yet.  The wonder of it all had made me forget about food. Downstairs people were selling books and DVDs in Punjabi. Another nice man took me through the kitchen.  Wow!  The steaming kettles and pots were massive.  In another room, women and children in beautiful pastel costumes were making chapatis, the flatbread that accompanies many Indian meals.

In still another room, neat rows of people sat on the floor while volunteers ladled out water, rice, and delicious lentils. I tried to talk with the women beside me, but they were shy and I guessed they didn’t speak English. No one seemed to speak with any of the others besides their own families. The food was spicy; I love spicy. I was in cumin and coriander heaven and it was free.

Before I left, I went back upstairs.  I was the only person in the whole building who wasn’t dressed in Indian clothes. 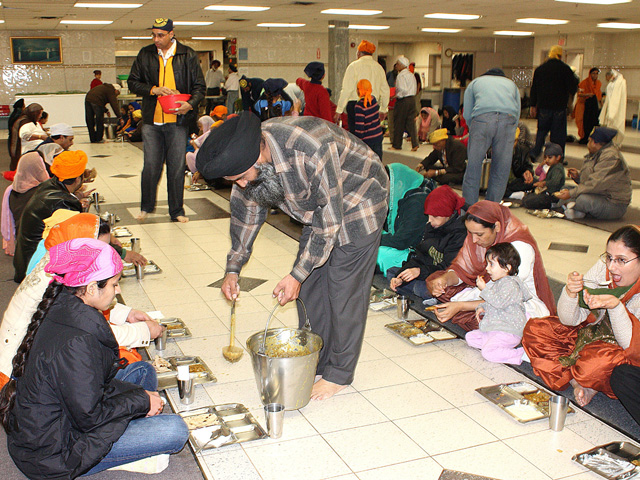 By then, a thousand people were lined up. I couldn’t wait to share the experience with my husband who had also lived in India.  I wanted to tell my friends they could experience India here in Toronto.

My Indian-Canadian friend explained later that he had otherwise very nice neighbors who were members of that temple. These people still believed in an independent Khalistan.  That campaign for a separate Punjabi state seems to have died down in India, but here in Canada, some of the immigrants still wanted it.  My U of T sociology classes had explained the phenomenon. Immigrants tend to keep the culture of their home countries as it was in the period of their departures.  It is part of their self-image.  Maybe contact with other Canadians would help them start thinking as Canadians.