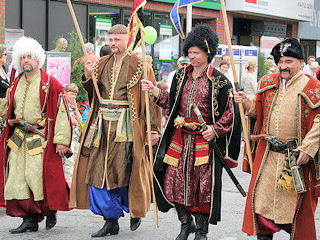 As far as I can see, this weekend’s big ethnic events are the Polish, Ukrainian, and the Samba (Brazilian) street festivals. The Vietnamese Mid-Autumn festival will be celebrated on Saturday at Harbourfront and the Korean Harvest Festival will be at Mel Lastman Square. The Mexicans will be at Nathan Phillips Square on Saturday.  A street party to celebrate the 100th anniversary of a synagogue in the Junction is on Sunday.

They all sound very interesting as well. Then there are some African dance lessons, also free.

1. Of these, I would aim for the Ukrainian parade on Saturday at 11am. Here in one place, you can see the many different Ukrainian cultural groups in the city. Little children will be strolling in their dancing-school groups. A few older men could be in traditional Kozak clothes. 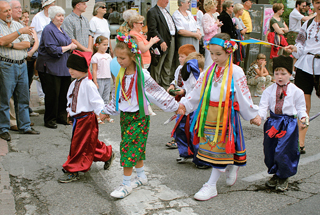 This is a big event. Ukrainians from all over the city will congregate in Bloor West Village, once the home of many Ukrainians. You’ll also find carnival rides, booths selling their unique costumes and pictures, DVDs, books, and souvenirs. If it’s like last year, there will be pyrohy with sour cream, and whole barbecued pig. Last year also, you could get a free computerized spinal scan, and lots of booze – if you stay.

2. I will go on to the Polish Festival. I’ve been to the Ukrainian festival about five times and I’ve never been to the Polish one. By TTC, you go to Dundas station and then walk south with a right on Roncesvalles. Parking is a problem. Construction closed this street for two years and it has now re-opened. The Polish festival could not open during that time. This year, it seems, the Polish organizers are making up for it.

As for traditional dress, Polish dance troupes on both Saturday and Sunday will be swinging on the Credit Union Stage (220 Roncesvalles) every 90 minutes. A stage will also be at 66 Roncesvalles. The Polkamania Stage will be at 272 Roncesvalles. I presume the polka bands will be umpapa-ing away there. You can probably polka there yourself. There will also be music, art, culture, and vendors.

3, I was at Tet Trung Thu last year at Harbourfront. I only had time to see a student skit about Vietnamese boat people arriving in Canada. It could have been better theatre but it did make the hardship of those days come alive to us spectators.

Vietnamese school girls traditionally wear long white gowns with long sleeves called an ao dai. They are slit up the sides and worn over trousers. I think their dress is one of Asia’s most elegant. You’ll probably see some there. Do try some of the moon cake and make your own judgment about this controversial holiday confection.

Harbourfront will not be as crowded as the Polish and Ukrainian festivals. I’ll try to get there too.

4. The Samba festival will be spread over many venues. It’s on Bloor near Lansdowne. Study its web-site beforehand. Its schedule of performances is very complicated. It’s got lots of music and shopping. Stores there are offering discounts. You’ll find multicultural food, kids’ activities, karaoke, and poetry.

If I can get there, I want to find out about capoeira, a unique martial art that was introduced by slaves and developed in Brazil.

5. If you want to learn some African dance, COBA on Saturday will be giving lessons for free. Please see our blog 181 on this one. It’s at Bloor West Village near the Jane subway station.

7. Junction Shul@100. On Sunday, there’s a street party to celebrate the 100th anniversary of Congregation Knesseth Israel.  Maria and Shipman Streets in the Junction.

For details like times, locations, and web-sites, please visit my web-site: www.TorontoMulticulturalCalendar.com. Our Twitter and Blog can be accessed easily from this web-site. Please let me know if I’ve missed any ethnic events.