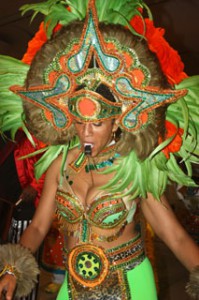 None of the security guards or people manning tour counters knew anything about the airport version of the Caribbean Carnival. It’s downtown, they all said. They directed me to “Information” but before I found it, I could hear the drums.

I wish they would do it all the time. The Carnival’s Launch at Pearson brought smiles to a lot of faces that were otherwise soured by the prospect of a one to two-hour wait in line through U.S. Immigration. I even saw people dancing — while pulling their luggage. One woman was clapping in time. One held her ears. Most seemed to enjoy it.

The band with their steel drums and dancers at Terminal Three yesterday were dressed like a theatrical version of what looked like Aztecs. Dressed in huge orange and red feathers, they blew whistles and drummed throughout the building. They went up escalators and behind the ticket counters through the alleyway of stores and restaurants. It was fun. Travellers looked startled, laughed and took pictures. 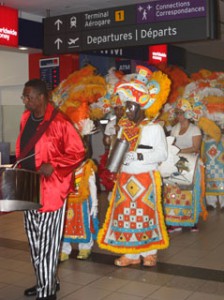 Calgary’s airport has some interesting art related to dinosaurs and cowboys. Vancouver’s has a magnificent, jade Haida canoe carving. Toronto’s airport usually doesn’t have much that is lively and interesting.

Wouldn’t it be uplifting if our different cultural groups paraded through Pearson at least once a week? The Swiss Canadysli Guggemusig Band would make us all laugh too. Punjabi dancers would be great. A Jewish group doing a hora. A Chinese dragon dance. Our lively African dancers?

Of course the Aztecs were promoting the Caribbean Carnival. But whatever the motive, let’s have more of it.