Wow.  How can anyone possibly choose what to do from this weekend’s amazing variety of free or nearly-free events? And all of them relate to Toronto’s diverse ethnic population!

Thursday is easy as schedules don’t overlap entirely. Taoist Tai Chi demonstrations will be in Yonge-Dundas Square most of the day. Toronto-based Dominic Mancuso will be reinventing classic Italian songs during his Tasty Thursdays’ gig at Nathan Phillips Square. Japanese drummers, the Soka Gakkai International Youth Choir, and author Joy Kogawa will be at the Hiroshima-Nagasaki Day ceremonies at the Church of the Holy Trinity near Eaton Centre.

Fortunately these are all downtown within walking distance of each other.

Friday evening is easy too as Taste of the Danforth starts in Greektown with no competition.

But what will you do on Saturday? You are invited to celebrate India Day at Yonge-Dundas Square. The detailed schedule of performances is on our previous blog post at http://bit.ly/Tf6czQ . The Grand Parade with Decorated Rickshaws from different Indian states goes from 12:30 to 1:30 pm and Cultural Performances by community groups take up the rest of the afternoon. 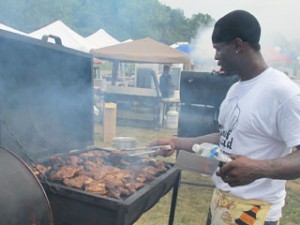 The Annual Jerkfest will be at Centennial Park. This is not just about food. Jamaican singers and drummers will be doing their gospel, reggae, and soca stuff too. Can you resist the workshop on jerk seasoning and the jerk chicken eating competition? Last year I went too early to see any of the cultural events (aside from the jerk food booths). Nothing much was happening before 1pm.

Voices of Nations will be at Mel Lastman Square. There you can find music and dances of various Christian groups, organizations, and denominations residing in Toronto.

Taste of the Danforth will attract most people with its wide variety of games, sports celebrities, food and performances, not just Greek. 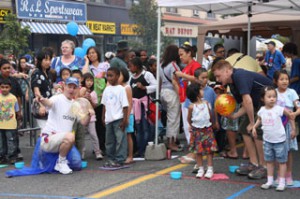 For smaller crowds but more variety, there’s Planet Indigenus at Harbourfront Centre and other venues. This is the beginning of a 10-day festival with performances, art exhibitions, and films about or from the likes of Canada’s First Nations, New Mexico’s Native Americans, Japan’s Noh theatre, China’s Inner Mongolians, and Black Indians. Where else can you see singers from Norway’s Sami reindeer people or hear a New Zealand Maori storyteller — without going to these countries?

On Sunday, the Taste of the Danforth and Planet Indigenus continue. The Scotiabank Caribbean Festival closes with a church service at St. James Cathedral, 65 Church Street. 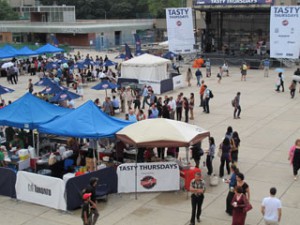 The only events you might have to pay five dollars for is the Japanese Garden Club’s Nature’s Beauty Show at the Momiji Senior Centre in Scarborough. If you want to join English Country Dancing in High Park it’s pay-what-you can with a suggested minimum donation, worth it for the live music and lessons.

Last year, I managed to take in four events on the Saturday; Planet Indigenus, Taste of the Danforth, the Jerk Fest, and Hiroshima Day. It was not totally satisfying but worth doing to get a feel for what Toronto is all about. Have a look at our blog: http://bit.ly/P5kuP0 . This gives you some idea of what to expect at each of these events. We also have a blog about why Taste of the Danforth attracts so many people. It’s at: http://bit.ly/MNSO29 .

Please check our web-site: www.torontomulticulturalcalendar.com for details. Click on “Upcoming” for a printable version. And don’t forget to send us your impression of the performances, and notices of festivals we’ve missed. We’ll add these to our calendar. Our e-mail is: ruthlormalloy@gmail.com .