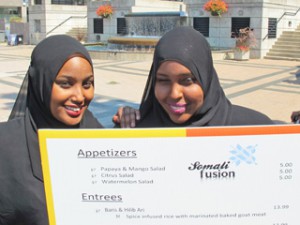 I tried to do three events last Saturday afternoon. I went first to the Somalian festival at Mel Lastman Square. It advertised a noon start. I arrived about 12:30. Two young women in black hijabs were there. Vendors’ tents were up, but nothing was inside. A few people were sitting in the shade among the trees. Hardly anyone else was in the open areas, which are normally bustling with activity during a festival.

The women said there were problems. The food would be arriving late, about 3pm. They didn’t know about the performances. I grabbed the opportunity to chat. We talked about Somali food. It was not chili-hot spicy, they said. It was spiced with cinnamon, cardamom, and ginger. A huge professional-looking menu was available. Maria or was it Shukri recommended the goat. By that time, another young woman had joined us. Hoodo said she had helped to cook the food the day before. They knew of four Somali restaurants in Toronto and talked of a Somali bazaar. 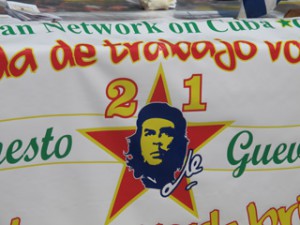 I enjoyed visiting with them. They were trying hard to be helpful. They were apologetic at the delay. Hoodo said she was born in Canada but she had been to Somalia. She said it was a beautiful country. They advised me to wait until 3pm.

I couldn’t wait. I took the subway to Nathan Phillips Square where the Canada-Cuban Friendship people were just finishing the opening ceremonies of their festival. A few people were milling around the booths of the Communist Party of Canada and the Volunteer Work Brigade. Large signs by the stage read “End the U.S. Blockade of Cuba – Defend Canadian Sovereignty” and “Free the Cuban Five Unjustly Held in U.S. Prisons.“ 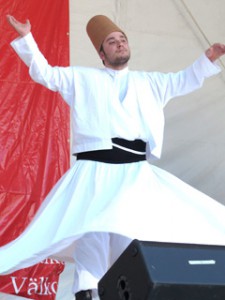 The Cuban festival had a bar area with umbrellas. I bought a lunch of tough but tasty meat and enjoyed the scene. I have vacationed in Cuba about four times. I felt I was back there. There was even a picture of Che Guevara looking as usual like a guardian angel.

The best organized of these three festivals was the Anatolian one in David Pecaut Square. It had a published schedule of performances that people could pick up at its Information Booth. The food for sale was abundant with two big spindles full of succulent meats. The sweets available were great, a magnificent selection. Women wearing head scarves were rolling out borek pancakes and cooking them on the spot. A man with a long handled spoon dug pistachio ice cream out of a fancy container. 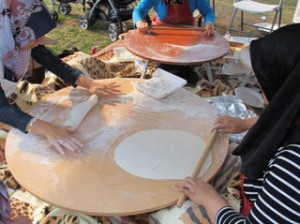 The Turkic performances were good. The Tatars explained who they were. They sang songs in English and Tatar and their magnificent accordionist played his own composition. The lively Azerbaijanis danced in beautiful costumes. A man sang and people from the audience got up and danced. It was like being at a Turkish party.

Best of all, a Sufi dancer did what is known as a “whirling dervish” dance — a very religious Sufi ritual. I had never seen such a dance before at a free Toronto festival. The dancer with a tall hat and long white skirt twirled in circles, over and over again, without apparently getting dizzy. The m.c. said it was a meditation. It was well worth seeing and the audience was invited to talk afterwards with the young man. 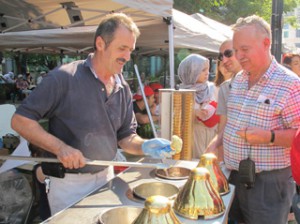 Unlike the other two festivals, the audience sat in shade. It was a hot day and relief from the sun was much appreciated.

It was about 5pm when I returned to the Somalia festival. I wanted to go back because the women were so nice. “The food’s just arriving now. Look at the trucks,” said Hoodo.

Sure enough, men were starting to unload the trucks and putting shiny containers onto tables inside the tents. We still had to wait another 45 minutes or so as someone went to buy serving spoons from a nearby Loblaws. While several prospective customers waited, I enjoyed the brightly coloured dresses of some of the other Somali volunteers. A woman who was not Somali recommended yet another Somali restaurant near Yonge-Dundas Square. She had tried the food there and highly recommended it.

I walked to one of the other tents. A woman there seemed pleased that I was interested in the wooden frame on the table. It was covered with a gauze-like cloth. It was fascinating.

“We burn incense – frankincense and myrrh- in the pot inside, and then we cover the frame with our clothes,” she explained. “We don’t put perfume on ourselves. We perfume our clothes.”

It was an interesting concept. I wanted to hear about other Somali customs. It was refreshing to learn about something other than pirates. I hope the Somalis won’t be discouraged and will try another festival next year. Their culture is so little known here.