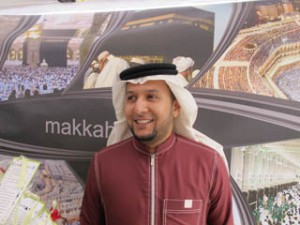 I didn’t know what to expect at last Saturday’s Saudi Arabian Festival at Mel Lastman Square. What do people from the world’s most male-dominated culture do when they party in Toronto? Women there aren’t allowed to drive or go out alone without a male chaperon. Do all Saudi women here have to wear the black, shapeless, cover-all abayas?

Last Saturday, I arrived at the square, my head bare because the day was warm. The square was full of white tents. At the Yonge St. entrance was a young man wearing a white turban, and like many of the other men, a white robe. He was smiling and inviting visitors to partake of date cookies, dried dates skewered neatly on a pineapple, and coffee. No charge. He pointed to a slightly older man wearing a rust-coloured robe, a red and white checked scarf on his head. 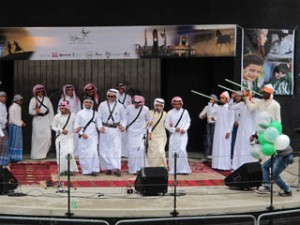 Hatim Khoja said he was a doctor at Mt. Sinai and the festival had two purposes. The organizers wanted to “direct the students from the bad things here with sports and festivals. We also want to show our culture to Canadians, our religion, our old and new buildings. Other people think our country is only camels and oil. But we have lots of culture, surgeons, physicians, engineers…”

He went on to explain about the tremendous skill and effort it takes to organize the three million-plus pilgrims who take part in the hajj each year in Saudi Arabia, “the health care, the transportation, the air-conditioning.” The hajj is the five-day pilgrimage that every Muslim must take at least once in a life time. 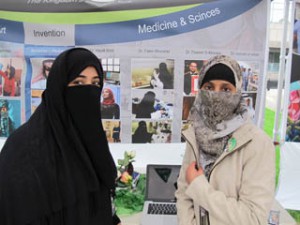 The Toronto festival was organized by students. Canada has about 15,000 Saudi students a Saudi diplomat said later. Most are in Ontario.

Most of the tents had displays about the country, pictures of the present king, previous kings, but no queens. A couple of women explained about the scientists, the doctors, and artists pictured there. I was struck by pictures of a woman in an abaya, all but her eyes covered in black. This was Dr. Faten Khorshid who has found a cure for cancer using camel urine, said students Arwa and Neda proudly. I wondered how she could work; maybe the abaya was just for the pictures. 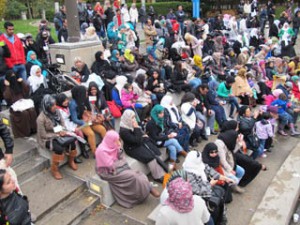 A young man pointed to a male scientist in the exhibit. The scientist had developed a pen which blind people and people whose hands shake could use to write in straight lines. As yet, alas, the invention was not available commercially.

Two booths provided food. Lahmajeen meat pie for $5. The floor of a big tent was covered with richly-decorated red carpets and pillows. I sat in there when it rained, ate lunch and watched children wearing yellow hats and white robes as they played. 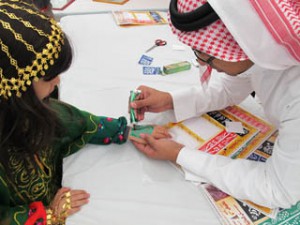 The first performances were dances by men – shepherds, fishermen, and camel riders. I found myself beside another friendly man who explained what was happening on stage. “The movement is slow because they are riding camels,” he said. “All the songs are about Saudi Arabia because it’s our national day.”

Then men on stage chanted poetry. It was amazing because it was all improvised – Arab improv. Two groups were competing. Each had a leader. I couldn’t understand what they were saying but another man nearby explained that it was all about Saudi Arabia too. People in the audience were cheering and waving flags as each group finished chanting. It was obvious that the poems were very clever.

Then many of the men started dancing – by themselves. 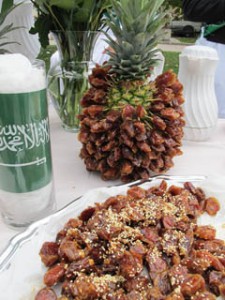 I was enjoying the exotic flavour of it all. Then, I suddenly realized that the head of every woman was covered and I quickly tied my scarf on my head. No one seemed to mind that my head hadn’t been covered, but I always think it’s nice to respect some customs. Most of the women were wearing jeans.

The women were beautiful. They appeared to be college age. Only about seven had their faces covered, except for their bright, dark eyes. I asked one of them why no women were performing or dancing. “We have our own secret dances,” she replied. “Only for women.” Bshayer Amkari grinned as I asked to be invited to such a party.

I wanted to go to a better spot to take photos but the balcony was full of men. It took me a few seconds to think, “What the heck. I’m in Canada. I can stand with the men if I want to.” And I did. And I don’t think anyone objected.

It was a wonderful day.